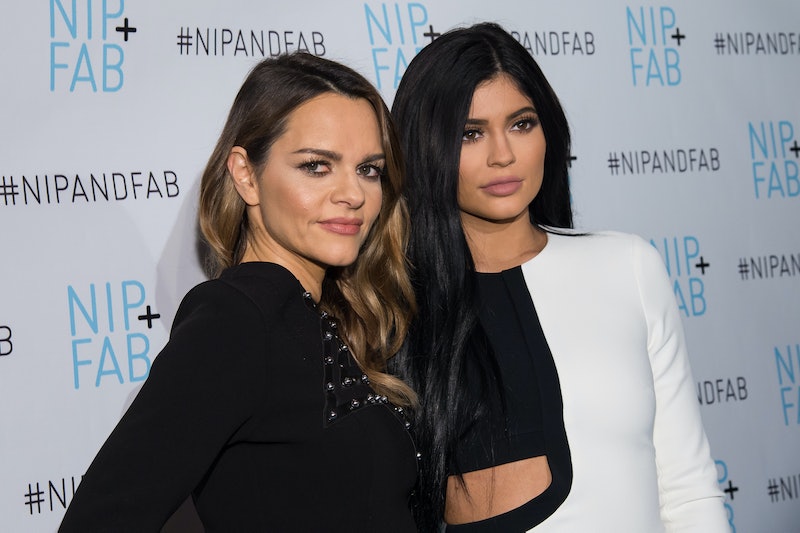 Ever since the successful launch of the first Kylie Lip Kit, people have been have been wondering when Kylie Jenner will release a full makeup line beyond just lipstick. The 18-year-old makeup enthusiast-turned-business woman has been killing it with her beauty creations as well as her fashion endeavors, so it would only make sense that she keep the products coming. According to social media hints, there could be a Kylie Cosmetics makeup collection sooner than you might think.

Jenner's infatuation with makeup could without a doubt lead to the creation of one of the best celebrity makeup lines out there. It's not every day an entire line sells out in less than a minute, but that's exactly what happened with the first release of Kylie Lip Kits. The social media savvy star is great at giving hints about what she'll be up to next, so we probably won't have to spend too much time wondering before we have some details on her next step.

Jenner announced on her website awhile back that she wanted to expand her makeup line in 2016, and the entire community of beauty lovers got excited. Since then, she's been dropping little hints about having a full collection. Take a look at some of her clues that more Jenner makeup could be coming really soon.

1. She's Been Spending A Whole Lot Of Time In The Lab

She stepped up her game for the second launch of her Lip Kits, posting tons of photos and Snapchats from the lab where the lippies are made.

She even has a personalized lab coat.

The same day she restocked her original Lip Kits and released her Valentine's Day collection, her makeup website and the coordinating social media accounts changed from lipkitbykylie.com to kyliecosmetics.com. The name is much more general, which means different products could be on the way soon.

3. Lip Kits Will Be Restocked Weekly

With the Kylie Lip Kits being restocked every week, the hype surrounding them is bound to die down at least a little bit. Perhaps she's trying to build the excitement for whatever comes next?

In the "About Me" section of the site, there are clues telling what to expect from the rest of the upcoming line. "Kylie Cosmetics is a collection of products I created working with my amazing team in out lab to design the perfect 'Kylie look,'" the page reads.

It sounds like she already knows what she'll be releasing next! Time to get excited!