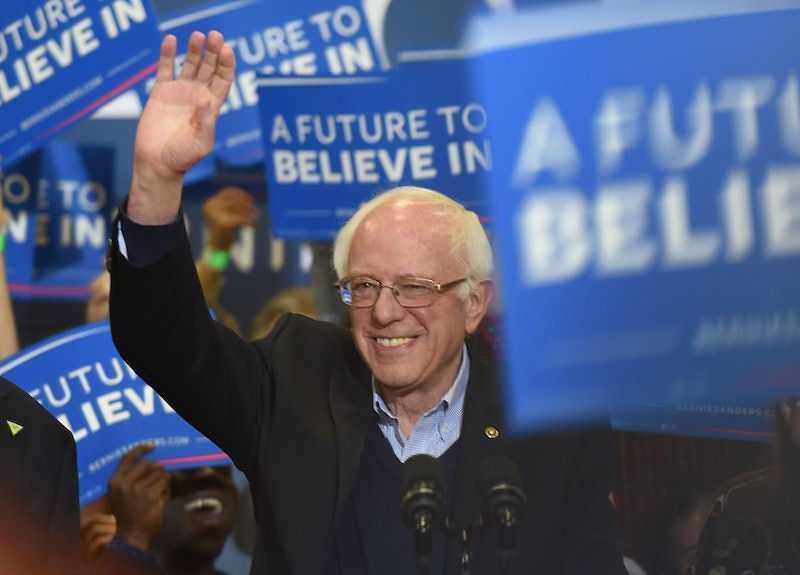 It's an election year once again, and it's a really exciting time, no matter what side of the political spectrum you fall on. Seeing people get fired up about the things that matter to them is awesome to watch, and who doesn't love a good post-debate meme or politically charged skits on Saturday Night Live? And as Bernie Sanders has quickly gained the kind of traction many people weren't sure he'd be capable of getting, it's clear he has a huge following behind him now that the primaries have kicked off... and many of his fans also happen to be celebrities. There are a lot of celebrities who support Bernie Sanders, and many of them are using their voice to promote his campaign.

What this means is that if you're feeling the Bern, you're definitely not alone. As the primary results continue to roll in, certain members of Hollywood have made it clear that they'll be here to cheer Sanders on and are hoping to see him on the presidential ballot come November.

Here are some of the celebrities who have been outspoken about their support of Sanders. Some people don't think it's polite to ask others who they're voting for, but I have a feeling these people would be happy to fill you in.

Everyone's favorite human sized Elf was named among a list of Sanders' supporters released by his campaign last fall, described as part of a group of people who want "to see a more progressive America and are willing to work towards it"

Model Ratajkowski recently shared video of a speech she made in support of Sanders at a campaign rally in New Hampshire... and sported this seriously cute sweater while doing it.

Doesn't get any clearer than that!

Last year, Gosling shared a since-deleted YouTube video of Sanders and asked his followers to pass it around. He was quick to say his post wasn't officially endorsing Sanders, but that he's a fan. And when Ryan Gosling talks, you listen. Or at least I do.

He put it out there, plain and simple.

Extra credit for the Star Wars reference. Keeping it relevant!

Although Cho has always been a big fan of Hillary Clinton, it sounds like she's transferring her loyalties to Sanders this time around.

For a long time, Ruffalo has been very open about his love of Sanders, on Twitter and off, that you'd almost think he was getting part of his campaign fundraising. Nope, just a huge believer!

Silverman has been a vocal supporter of Sanders since the beginning, and she even introduced him before an event back in August.

Sarandon made it obvious that she's endorsing Sanders when she took to Facebook to share a video from 2002, proving that his opinions have stayed solid for over 10 years.

Back in June, Farrow, who has always been outspoken about social and political issues, tweeted her opinion, in a straightforward way.

Going all the way back to last April! And since then, he hasn't wavered.

In case you didn't know: "Dale Bernie" roughly translates to "Come on, Bernie" in Spanish.

As it gets closer and closer to election day, I have a feeling more celebs will jump on the Sanders bandwagon. Bernwagon, perhaps? We shall see, guys. We shall see.

More like this
Police Shove 'Full House' Star Jodie Sweetin At An Abortion Rights Protest
By Radhika Menon
Will Beyoncé Be At The BET Awards To Perform “Break My Soul” Or Attend The Show?
By Jake Viswanath
Fans React To Kelly Holmes’ “Extraordinary” ITV Documentary
By Sam Ramsden
Twitter Has *A Lot* To Say About Justin Timberlake’s Beat Ya Feet Dance
By Sam Ramsden
Get Even More From Bustle — Sign Up For The Newsletter