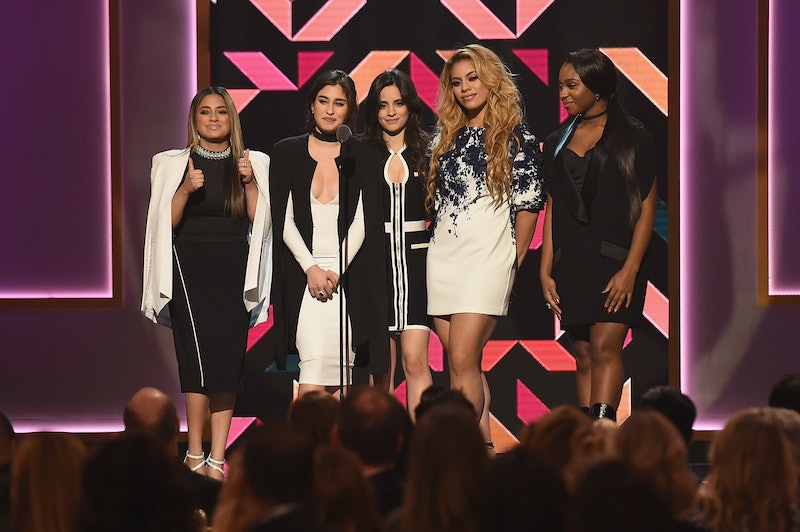 In the age of social media, it's becoming increasingly difficult for singers to keep upcoming projects under wraps. Not even Beyoncé — the Queen of the Surprise Release — was able to keep her new song "Formation" totally top secret last week. (What is this world coming to?) The latest act to have their bubble burst by social media? Fifth Harmony. According to a flurry of recent Twitter and Instagram posts, it appears as though Fifth Harmony are filming a new music video in the California desert — and based on alleged pictures from the set, it looks completely different from anything else they've ever done before!

5H have yet to confirm these video rumors (much to the frustration of their fans), but I wouldn't be shocked if they turned out to be true. After all, member Camila Cabello revealed that their sophomore album (aka 5H2) was almost complete in December 2015. Then, shortly after the group won a People's Choice Award at the beginning of January, Cabello tweeted that they had "a present" for us, and that 5H2 was coming "very sooooon."

Hopefully, Fifth Harmony are, in fact, shooting a new music video right now — and hopefully it's for the lead single from their new LP! Check out a few alleged pics from the video set below.

It all looks very Mad Max, don't you think? At the end of December 2015, SPIN reported that up-and-coming pop singer Tinashe had written a song for Fifth Harmony called "She's My Girl," and that it was in contention to become their new single. Are the above pics from the "She's My Girl" video set? Until 5H speak up, we won't know for certain. Understandably, some fans are a little perturbed by the band's silence:

I had to laugh... but, as I noted, not even Bey can keep things "hush hush" these days. Sit tight, Harmonizers! I suspect all will be revealed soon.