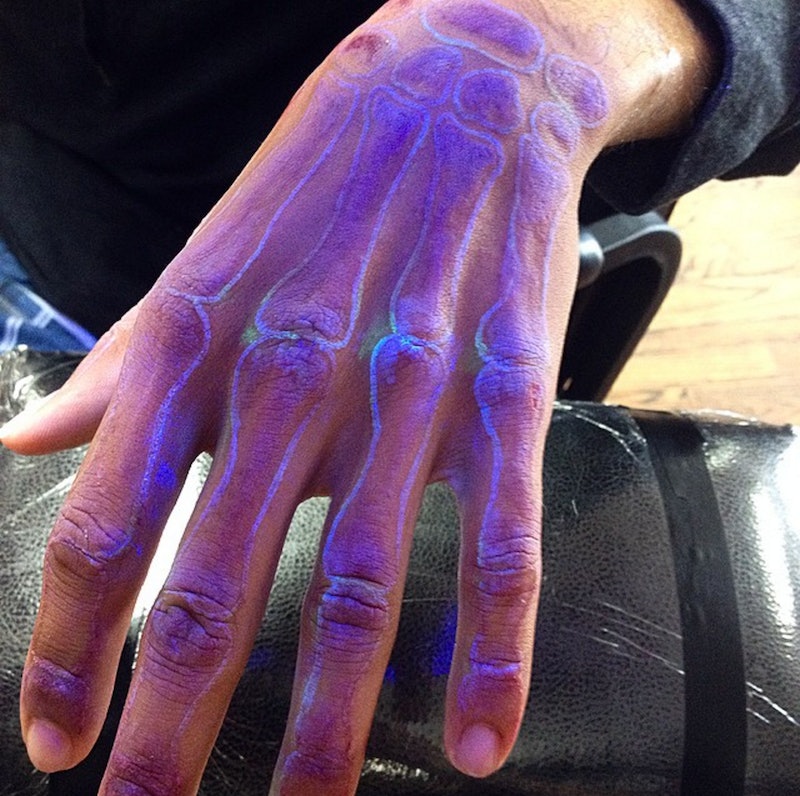 Tattoos are the pretty much the coolest accessory on the market right now. They're personalized, they go with every outfit, and you'll never forget them at home. Recently I've been seeing more and more awesome images of UV black light tattoos. UV tattoos are done with inks that are only visible under a blacklight; think '90s raves, Peter Pan's Flight at Disney World or gel manicure cookers. They're used both as stand alone tattoos that are virtually invisible in normal lighting or as accents on regular tattoos to add a little magic edge to your ink. They're definitely cool... but are they safe? Do they last as long? Are they harder for tattoo artists to do? Do most artists even do UV tattoos?

Clearly I have questions about these rave-inspired tattoos so I decided to consult an expert. Matt Marcus, owner of Three Kings Tattoo in Manhattan and Brooklyn shared his sage wisdom with me and I'm here to share it with you. It's important to do your research before getting any type of tattoo (health risks, what parlor you go to, if you definitely want that one word/image/etc inked on you forever) but with something as new to the scene as UV tattoos, the research is even more critical.

1. How Did UV Tattoos Become A Thing?

UV tattoos became popular in the '90s, along with lots of other neon things. Marcus tells me that eventually it was discovered that the ink being used was the same stuff in glow sticks and was giving people cancer. Very not good. UV tattoos pretty much went away after that until a few years ago when new inks started becoming available.

As I said before, all tattoos come with their own risks and UV tattoos are no different. Making sure you go to a clean place with artists that know what they're doing is important to say the least. But what about the UV ink specifically? Well Marcus says the new inks are much safer than the cancer inducing ink of the '90s but since the trend is so new, it's going to be a while until we see the real long term affects of these glowing inks.

3. Will Any Tattoo Artists Do UV Tattoos?

From what I've found while I was trying to hunt down experts on the topic, they're not common enough for any old tattoo parlor to be performing. Even more reason to find the right place; one that has experience with the UV ink. Marcus says it's pretty uncommon for artists to do UV tattoos because they're a bit of a nuisance (more on this in the next section) and there really isn't a huge interest in them. It's not something they advertise at Three Kings but he does perform around a dozen a year by request. If someone does want some glowing art, Marcus makes clients go out and do their research on the history and risks of UV tattoos beforehand, and he even makes them buy their own ink so they can choose which brand they think it safest.

4. Are They Harder To Complete?

Marcus tells me that, since UV tattoos have to be done under blacklight, they're a little trickier to complete. The artist has to really take their time in order for it to come out well and pay careful attention to shading. Click here to see an example.

Since UV tattoos are a little tricker for artists and take longer to finish, they tend to cost more than their non-glowing counterparts.

Marcus says UV tattoos should last as long as regular tattoos, but as mentioned earlier it's going to take us a little while longer to know the long term effects of these trendy tats.

So now you know some of the facts. UV tattoos still sound like the move for you? Then proceed my inked up friends, glow with pride.