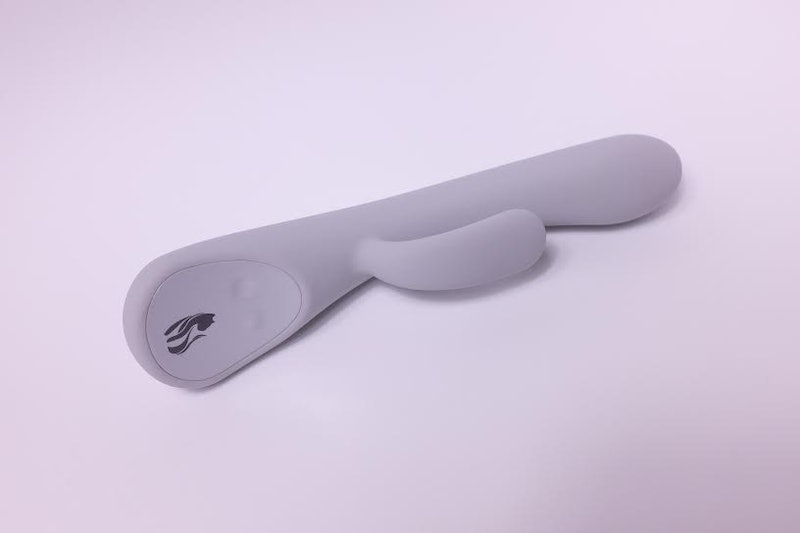 Lioness, which just launched on Indiegogo, contains sensors that measure vaginal contractions, temperature, and motion. These sensors connect to an app that can translate the measurements into insights about the user's sexuality, like how long it takes for them to get aroused and reach orgasm, what part of their menstrual cycle is the most enjoyable time to have sex, and what types of stimulation they may enjoy trying.

Since the app provides concrete suggestions like how much foreplay users need, it can also be used with a partner. And for questions that aren't as easily answered, the app has a forum for users to anonymously ask experts for sex advice.

In addition to being intelligent, the toy has features Klinger wished regular vibrators had, like a movable clitoral stimulator, buttons that all feel different to the touch so you know what you're pressing in the dark, a handle that fits the natural position of your hand while you're using it (rather than the position people's hands tend to be in when they hold them in product photos), a travel lock that prevents it from going off during inopportune times, and notifications when the battery needs to be replaced. She demonstrates these features in the video below:

Klinger tells Bustle that she founded Lioness to break the silence that too often surrounds women's sexual desires. Even as she grew more comfortable with her own sexuality, she said, she still had more questions and didn't always have the resources to answer them. She realized other women had questions, too, but they often ran up against "a lack of information and opportunity to explore more, especially when it came to learning more about themselves and their own bodies."

"Vibrators and other sexual wellness products out there are not really tailored towards that need, even though a lot of people were looking for something to explore and add variety to their lives," she says.

“Something that was surprising to me was that beta testers who used Lioness were able to think about and approach their own sexuality in a totally different way," Klinger said in a press release. "Some of them started out with very few questions about what they’d like to explore, but because the Lioness gives them feedback, they started wondering, ‘What else could I try?’ It created space and opportunity to explore.”

Lioness is currently available for $179 for "early birds" on Indiegogo.

More like this
How To Do The Intimacy-Boosting Lotus Sex Position
By Laken Howard and Lexi Inks
What Is The Forest Personality Test? The TikTok Trend, Explained
By Georgina Lawton
Expert Tips For Being On Top When You're Plus-Size
By Lexi Inks
Are Leo & Capricorn A Good Match?
By Kristine Fellizar
Get Even More From Bustle — Sign Up For The Newsletter