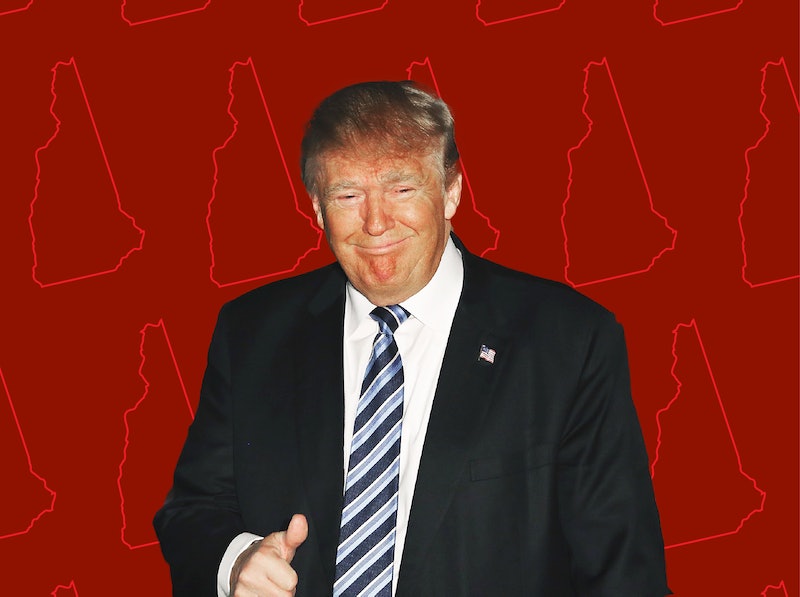 After winning Tuesday's primary, Donald Trump addressed his New Hampshire supporters. Surrounded by his family and throngs of fans, Trump began with his now-famous campaign motto, emblazoned on many of his baseball caps: "We are going to make America great again." He proceeded to thank his family, including his deceased relatives. "My parents are looking down and saying this is really something special," he said.

"I wanted to congratulate the other candidates," Trump said, before quickly adding a trademark jeer, "Now I've got that over with." Trump brought up Bernie Sanders early on in his speech, briefly congratulating the Vermont senator on beating Hillary Clinton, before warning that he would bring down the United States. "He wants to give away our country, folks. We’re not going to let it happen," Trump shouted to the crowd.

Over cheers of "U-S-A, U-S-A," Trump told the crowd, "The world is going to respect us again. Believe me." He later added "We're going to knock the hell out of ISIS ... We're going to start winning so much. We're going to make America so great again, maybe greater than ever before."

After losing his frontrunner status with his second-place finish to Ted Cruz in the Iowa caucuses last week, Trump stepped up his ground game in the Granite state. CNN reported that Trump volunteers were coming in from out of state and working 17-to-18-hour-long days. Instead of skipping out on the GOP debates for a second time, Trump made an appearance in New Hampshire on Saturday night.

Trump also magnified his, shall we say, aggressive rhetoric. Last week, Trump unleashed a Twitter rant accusing Cruz's campaign of violating voting regulations by spreading false information about him and Ben Carson — namely, that Trump supported Obamacare and that Carson was dropping out of the race for the Republican nomination. Trump even went so far as to claim the Iowa caucus results should be "nullified."

And on Monday, Trump further amplified his attacks against the Texas senator, calling Cruz a "pussy" before a cheering rally in Manchester, New Hampshire. What prompted such a lovely remark? Cruz's "weak" stance on torture and his unwillingness to unabashedly endorse the highly controversial and severely criticized tactic of waterboarding. Of course, the attack and slurs are part of Trump's long-term campaign strategy of bullying his Republican competitors, painting them as sniveling and weak. On Tuesday night, it appeared that Trump's strategy worked, once again allowing him to claim his frontrunner status as the Republicans head to South Carolina.