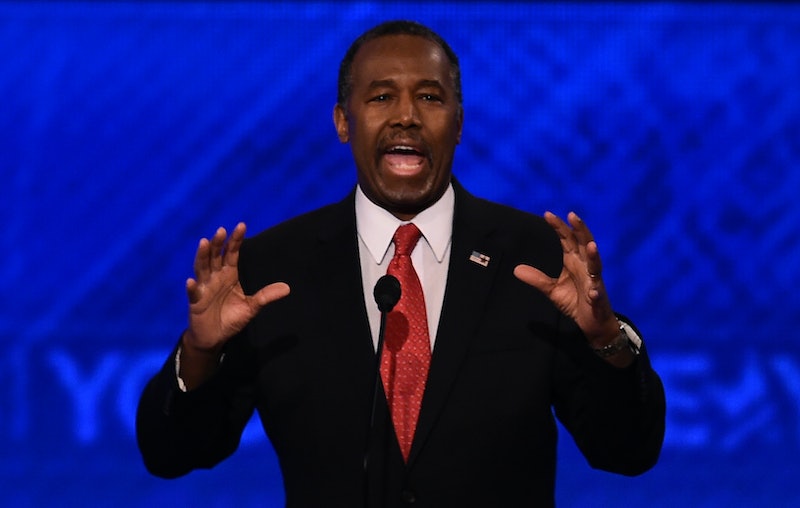 With so many Republicans in the fractured GOP primary, it seems that every big event is another chance to weed more of them out. With Rand Paul, Rick Santorum, and Mike Huckabee recently dropping out of the race after the Iowa caucuses, more acts in the GOP circus are poised to leave. And with a poor showing in Iowa, the question on everyone's mind is: Will Ben Carson will drop out after the New Hampshire primary?

Although his campaign has indicated that his race for the White House is far from through, the brain surgeon's actions in the past few days have indicated that that he isn't in the long haul for this 2016 cycle. Not only did he have half as much stage time than some of the frontrunners in Saturday's GOP debate, but the doctor also seems to be backing out on many of his promised campaign stops.

Instead of sticking around for his dismal primary results in New Hampshire — the candidate walked away with 2.3 percent of the vote, behind Carly Fiorina — Carson headed off to South Carolina, the site of the next primary on Feb. 20. The campaign announced this decision after suspending New Hampshire stops, as the candidate went home to Florida instead.

All of this comes on the heels on an all-but-forgotten debate performance. As far as strategy goes, Carson doesn't seem to be setting himself up for a comeback. Rather, it looks like he is in the beginning stages of abandoning his campaign completely. The candidate did manage to tweet out a thanks to its supporters from afar:

Although it did seem that Carson was in the state at some point during primary day. Or at the very least, someone on his staff was:

But the rest of his tweets are pretty unemphatic reminders of patriotism — not exactly inspiring enough to make up for not actually, you know, being on the campaign trail. If Carson drops out, he'll join a cadre of bottom-of-the-barrel candidates who didn't actually stand a chance in the general election.

As NPR notes, the candidate's campaign has been flailing since his boost of support after the Paris attacks, when he emphasized his commitment to United States security. It seems, perhaps, that Carson wasted this crucial campaign time and let his message fall by the wayside. Based on his dismal debate performances, though, that might have been inevitable.