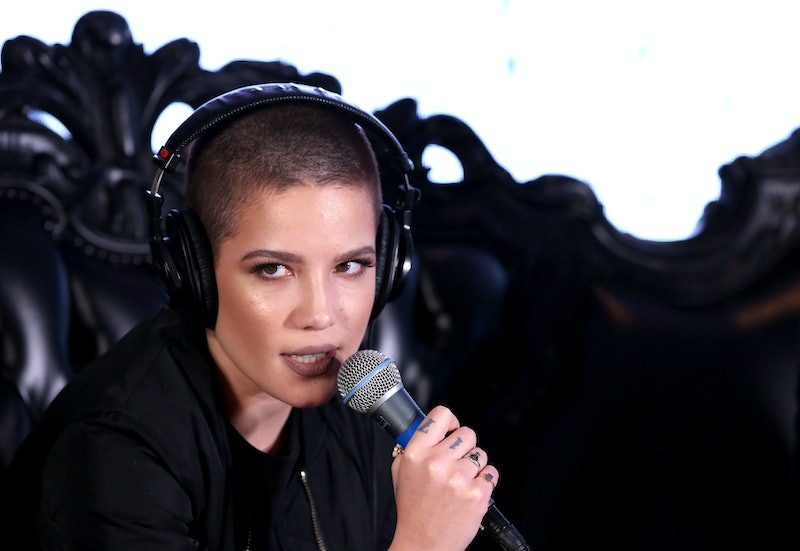 MAC always collaborates with the A-est of the A list. Ariana Grande is the new face of VIVAGLAM, taking over for Miley Cyrus, who took over for Rihanna. But the brand also takes immense pride in partnering with up and coming artists. MAC and Halsey are collaborating on the #FutureForward collection, as revealed by the singer in an Instagram post where she rocked some serious blue-tinted lips. MAC, which celebrates all races, all colors, and all sexes, and Halsey were made for each other. I'm dying to know and you probably are, too! When will the MAC x Halsey blue lipstick be available?

The good news is that your wait time is utterly minimal. Halsey captioned her post, noting her MAC item will be available in March. The singer didn't reveal an exact date. But March is right around the corner, so it's coming sooner than you may have thought.

Bustle reached out to MAC reps about the release date, who confirmed that there will be #FutureForward launches every two weeks starting March 17. There is a total of four launches and four rising artists are involved in this particular collection, which will be available exclusively online. Halsey's collabo, which is that rich blue lipstick, lands on March 31. So mark those calendars.

Here, Halsey is teasing and test-driving her incredible and unusual matte MAC lipstick, which is named after her. Those brows! Those lashes! Those lips! Those freckles! Halsey is such a beauty, isn't she?

For a while, everyone knew Halsey by her blue hair.

Now, she will also be known for those blue lips. Blue is her signature shade.

Halsey, who looked absolutely gorgeous with her shaved head, has been a rising star for the past year. She even performed with Justin Bieber, so her profile continues to elevate. She is edgy and has such a unique, sometimes androgynous look, and often mixes tough and sexy elements with her style. That makes her an utterly perfect partner for MAC and its aesthetic.

Halsey and MAC are also reminding us matte lips are here to stay in 2016. It's not just about Lip Kits! You have matte lip options, people.

Tinashe has a 9-pan shadow palette, which is the first launch and is available March 17.

Her palette is pretty on the inside and out!

It's such a rich and sexy shade, isn't it? It looks suitable for all skintones and hair hues.

Rawr! It's as glam as it gets.

Each artist inspired her product and makeup lovers win, because these limited edition products are so on point. Again, they will all be made available on MAC's site.