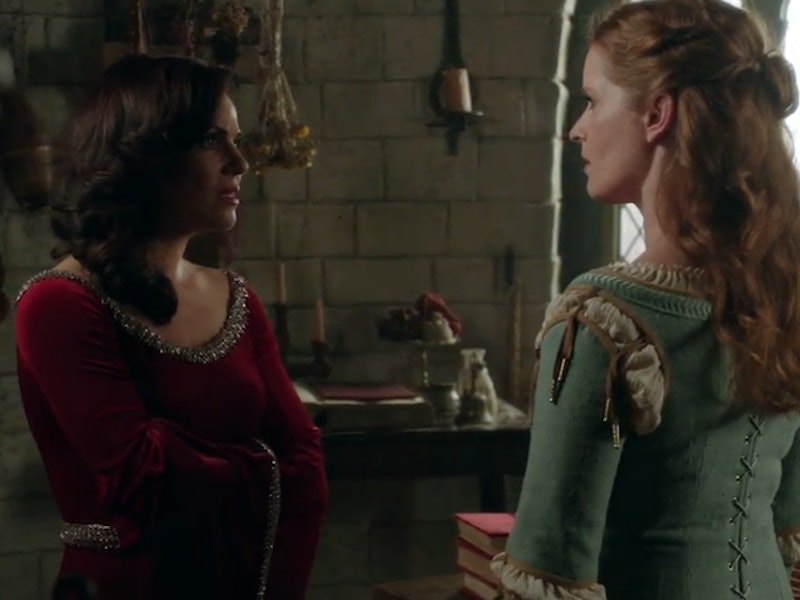 With less than a month before we reconvene with the Storybrooke crew for Once Upon A Time Season 5B, I'm trying to forget about the few episodes we'll have to spend in the Underworld trying to save Hook (a plan which, as I've mentioned several times already, will hopefully fail spectacularly) and focus more on what comes after that. In particular, I'm looking forward to realm-hopping once again to make our way to Oz, the magical land where Zelena is now banished thanks to Regina sending her through a portal there. We already know that Zelena may face some trouble from a grown-up "warrior" Dorothy, but it seems like we may also be delving into Zelena and her younger sister's past, as Once has cast actresses for Young Regina and Young Zelena that will appear in Episode 19 later this season. Could understanding their past lead to a truce finally being called in the present (or near future)? Possibly!

We already know that Season 5, Episode 19 is called "Sisters" — executive producer Adam Horowitz teased as much on his Twitter page just last week — so the focus in this ep is pretty clear. Crazy Ex-Girlfriend actress Ava Acres will take on the role of Young Regina, while English actress Isabella Blake-Thomas will play Young Zelena. While we know that the Mills girls didn't grow up together (or even knowing of the other's existence), getting a bit more insight into their formative years should not only be good for the audience, but perhaps for the women themselves as they look to find any common ground whatsoever.

Of course, this is assuming that Zelena can be redeemed, and part of me doesn't want her to be. After all, we need a good villain, and Zelena's brand of wickedness (as well as Rebecca Mader's truly genius interpretation of the role) is so fun to watch. Regina's redemption arc worked because it was right for her as a character. Regina was never truly a villain; she became one because she allowed pain and bitterness about her life cloud her judgment and take over her life. But isn't that kind of what happened with Zelena? She only wanted to belong, to cast off the feeling of neglect and of being an outsider, but never truly succeeded at it. Perhaps these two have more in common than either of them would like to admit.

When we see young Regina and Zelena, aged 10 and 12 respectively, they'll both be coming to terms with the lives they lead. Regina will be bored by Cora's obsession with royalty and feel neglected of motherly love, while Zelena has to deal with the fact that she's got powers she doesn't understand and her adopted father isn't very happy about it. The context in which we see these scenes and what effect they'll have on the present-day relationship between the warring siblings, if any, remains to be seen, but it should be pretty amazing to see.

Young Regina and Zelena will only be appearing in a single episode, so don't expected prolonged flashbacks or a lengthy character development story. Still, seeing them even for one episode should be enough to give us some much-needed background on these complicated women and perhaps propel their present and future relationship much further.

More like this
6 Mind-Blowing Fan Theories About How Stranger Things Will End
By Kadin Burnett
Why Sadie Sink Is Hopeful Max Will Return In Stranger Things Season 5
By Brad Witter
'Stranger Things' Star David Harbour Has This Actor In Mind For A Hopper Spinoff
By Alyssa Lapid
What Working At Marvel Is Really Like, According To A 'Ms. Marvel' Co-Creator
By Gretchen Smail
Get Even More From Bustle — Sign Up For The Newsletter