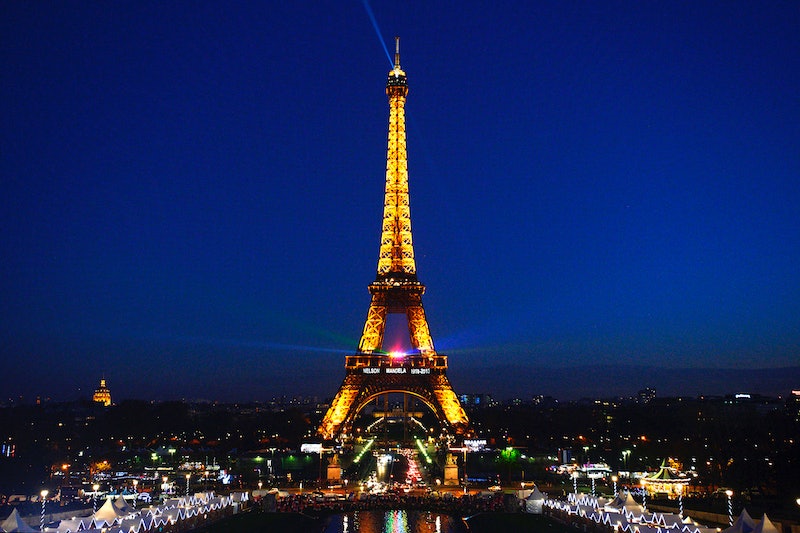 Holocaust Remembrance Day was Jan. 28, but Jewish people living in Paris wouldn't know it: Videos released of an anti-semitic protest the day before show disturbingly cruel messages aimed at Jews living in France. The protestors had, up until that day, been anti-government, but apparently they thought their designated anti-Francois-Hollande "Day of Anger" would be a good time to rag on Jewish people, too. "Juif, hors de France!" ("Jews, out of France!"), they shouted on the streets. There were also cries of "Juif, la France n’est pas a toi!" ("Jew, France is not yours!") and "Juif, juif, juif, juif!" as they raised their arms in an increasingly trendy reverse-Nazi salute.

The marchers also sang the French national anthem as they went on their hateful way, symbolically tying anti-semitism to France's national identity. While the anthem, La Marseillaise, has lyrics right out of Les Mis and is a historical favorite with international anarchists, given all of its references to "children of the Fatherland" and bloody war-making, it is disturbing in this context. The protestors even said that the gas chambers used in the Holocaust were "bullshit."

For Jewish people in France, this sort of anti-semitic hatred isn't particularly newsworthy — the smoking gun lies primarily in the demonstrator's vehemence, and the fact that the anti-semitism was caught so obviously on tape.

According to a recent survey by the European Union Agency for Fundamental Rights, 85 percent of Jews in France say anti-semitism in the country is a "very or fairly big problem;" 70 and 60 percent worry about being a victim of a verbal or physical attack (respectively) in the next year; and 56 percent have heard someone in France say that "Jews have too much power" in the past year. Is it any wonder that, even though immigration to Israel is slowing across the board, it's only France that shows increasing numbers of Jewish residents immigrating to Israel — and at a 63 percent increase last year from 2012?

Despite its liberal reputation, France is no stranger to targeting certain facets of its population. They also have a severe case of burqa fear, and there's a current outcry about the Roma, or Gypsy, "invasion" in Paris, who, according to a recent Daily Beast article:

...are blamed for petty thievery, begging, camping illegally on public lands, sleeping under bridges or on grates in the city street and a host of minor crimes that the French authorities seem unable to control. The issue of criminality is real, but the level of public outrage conjures such sordid memories of racism in France that it has become a crisis of conscience as well, and it’s opened a major rift in the governing coalition.

With the turn of protests from anti-government to anti-semitic, the "memories of racism" are inarguably no longer memories. Perhaps they forget that Jewish people have contributed immeasurably to France's colorful fabric (ahem: Jaques Derrida, Claude Levi-Strauss, Emile Durkheim, Camille Pissaro, Serge Gainsbourg, et al), just as Christians, Muslims, and Atheists always have.

But more importantly, the whole "Liberté, Egalité, Fraternité" motto the country lives by? It doesn't really apply if it can't extend to all of France's population and encourage compassion, respect, and empathy for all residents.