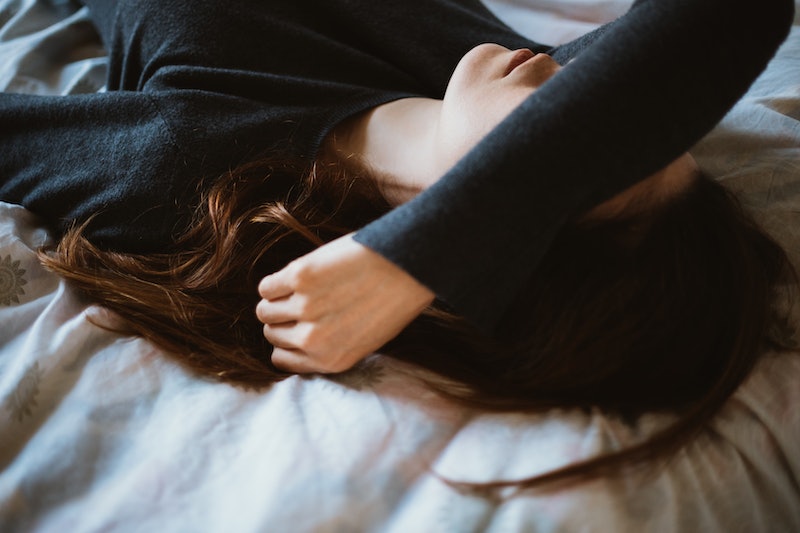 Chronic fatigue syndrome (CFS) is one of those vague disorders that isn't really recognized by the medical community. This is an annoying truth for the 1 million people who suffer from its many symptoms, according to the CDC. And that's precisely why it's good to know what CFS symptoms look like.

Why? Because when it comes to dealing with diseases and disorders that aren't well-known, you really have to be your own advocate. If you've been struggling with weird CFS symptoms for a while, I bet you've been blown off by more than one doctor. I'm sure they said, "It's all in your head," or, "You just have your period." Super annoying, I know.

It may be helpful to know that CFS falls under the same umbrella as fibromyalgia, which, according to the Mayo Clinic, is a disorder characterized by widespread pain, sleep, memory, and mood issues. "Chronic fatigue syndrome and fibromyalgia were both met with skepticism from doctors in the past. But as fibromyalgia has gained mainstream acceptance, chronic fatigue syndrome (CFS), also called myalgic encephalomyelitis (ME/CFS), has continued to meet with confusion and disbelief," noted health reporter Cameron Scott on the medical website Healthline.com.

Hopefully someday soon CFS will be recognized as a legit disorder. But for now, just because doctors don't know the cause of all the annoying problems brought on by CFS, it doesn't mean your symptoms aren't real. See if the symptoms below ring a bell, and if you've been feeling bad, keep pestering your doctor until you get the help you need.

1. You Feel Exhaustion That's Not Cured By Sleep

Chronic fatigue syndrome is an aptly named disorder, because one of the main symptoms is just that — chronic fatigue. But it's not just normal tiredness we all feel in the morning, or after a long day at work. It's the type of tired not healed by sleep, or a weekend spent chilling on the couch, according to the CDC. It's always there, waxing and waning in intensity, but still present at all times. And it can really affect your work and relationships, especially since it's so hard for people to wrap their heads around what it's like to always be sleepy.

2. Everything Is Incredibly Achy

CFS causes all different types of pain from headaches, to muscle and joint aches, to sore skin. But the sore skin thing is especially interesting and unique to CFS. It can make you feel like you don't want to be touched because any sort of contact is too painful. That must be really difficult to deal with, if I do say so myself.

3. You Have Memory And Concentration Problems

Memory and concentration problems are the most distressing symptoms reported by people with CFS. And I can understand why. CFS sufferers say they don't so much forget things, but that they have trouble calling up memories, says Scott. It can feel like words are butterflies, and you're running around lazily with a net, unable to catch any of them. Many sufferers call this feeling "brain fog." Very distressing indeed.

4. The Lymph Nodes In Your Neck Are Swollen

It's not well-known why the lymphs nodes in the neck and armpits swell up with CFS, according to the Mayo Clinic. It simply lacks a lot of research and understanding, much like the disorder itself. But it's definitely something many CFS patients have in common.

People with CFS often feel sensitive to lights, noise, or emotions, according to WebMD. Again, the cause is not well-known, but it could be due to something called "generalized hyper-vigilance," which may in turn be caused by nervous system abnormalities or stress-system problems. So if you've been moping around, cringing at every sound, and pulling the curtains against the sun, then CFS may be to blame.

6. It's Difficult To Recover After Exercise

Everyone feels tired after exercise, but those with CFS feel tired on a whole different scale. According to WebMD, you may even feel ill or weak. Exercise can also cause CFS symptoms to flare up — which may happen on a delay — thus causing some confusion as to the cause. And what's worse is that once it starts, it may take you more than 24 hours to feel better again.

7. Ironically, You Have Sleep Problems

According to WebMD, insomnia plays into chronic fatigue syndrome, and it can be one of those "which comes first?" type scenarios. Do you have CFS because you have insomnia, or the other way around? Again, it's not really known. Often times, CFS patients are prescribed a short-term course of sleep aids to help knock them out so they'll eventually be able to catch up on their rest. And hopefully, with a little more sleep, they'll at least be better able to manage their symptoms.

Chronic fatigue syndrome may not be well-researched or well-understood, but that doesn't mean it isn't real. If you've been feeling these vague, but incredibly annoying symptoms, be sure to follow up with a doctor until you get the help you need.