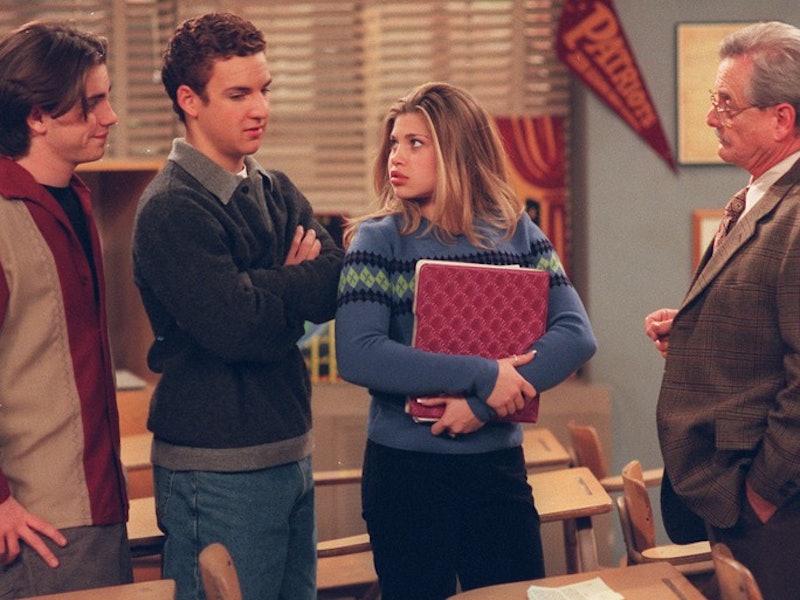 I will never tire of Boy Meets World, because, hands down, it's one of the best shows that has ever been on television. Basically every other word that comes out of my mouth has something to do with this show. Yes, it's as annoying as it sounds, but I can't help it! This show has gotten me through more emotional moments than I know how to handle. There always seemed to be something about these characters that just understood me. That's one of the reasons that year after year I just can't help but always go back to Boy Meets World .

I know that there is a new show Girl Meets World, and most of the original cast has made cameos — but, though it's a great show, it's still a different show, not the one I grew up loving. It's not the same show that taught me about the cruelties of life in a funny but poignant way, or the show that made me think finding your true love at the age of five was possible. There is not a single episode of Boy Meets World that I don't enjoy — this show is a timeless classic for me, and here's just a few reasons why.

I will live the rest of my life with the belief that no love story will ever again come close to that of Cory and Topanga. Hands down the cutest couple to ever walk the face of the earth — real or not.

If you've never seen the show before, prepare yourself for a major spoiler. The last episode where Angela walks out the door and Shawn says goodbye after telling her it wasn't a goodbye — that episode gets me every time. Just thinking about it right now has me all teary eyed. If Cory and Topanga are the cutest couple ever, Shawn and Angela are a close second.

3. The Evolution Of Jack

OK, remember when we first met Jack and he was just Shawn's rich older half brother with a heart of gold? But then they went to college and he somehow turned into a bonafide hottie with a mega ego? Yes, that's still one of my favorite character developments ever.

Not just Mr. Feeny, but the specific call Eric did anytime he wanted to talk to Mr. Feeny. Don't remember? Watch the video above. Really, just anytime Eric and Mr. Feeny got together it was epic.

I loved the episode where Cory, Topanga, Shawn, Eric, Jack, Angela, and Rachel's friendship almost ended over a prank war — but luckily Eric was there to speak sense from his "Manifesto." He says, "Lose one friend, lose all friends, lose yourself." Truer words have never been spoken. (OK, truer words have probably been spoken, but this was still a great quote.) Whenever someone on the show went a little too far or life just seemed to get away from them, there was always someone there to reel them back in.

6. Topanga Was The Ultimate Feminist

There was the time Topanga tried to prove beauty was on the inside and chopped a chunk out of her hair. Though the episode eventually demonstrated that, despite what she said, Topanga really did care what people think, that was OK — because it's OK to be who you are. Topanga is an inspiration for us all.

I still will hit people on the head and say, "Life's tough, get a helmet," and it's all thanks to the wise words of Eric Matthew. He was always the comic relief in this show, but every now and then would jump in with a few choice sayings that would remind you why he was truly wise. I think he was underestimated, but an absolute genius.

One thing I always loved about this show is that you felt like you went through a ton of different stages of life with them. From elementary school all the way through college graduation. There wasn't a single moment I couldn't relate to, which is what gives this show such a staying presence.

Who didn't want a best friend relationship like Cory and Shawn? Unconditional love at its finest. No matter how many times one of them messed up, and trust me, they messed up a lot, there was always a loving response. They set the standard for every friendship I have today.

Lets be honest, from the jean jackets to the slang, this show was the epitome of the '90s. Don't get me wrong, I loved every second of it — but it's hilarious to look back and see what was cool back then. Not to mention that reunion episode that got everything wrong when it came to their futures.

11. There's Something For Everyone

No matter who you are, there was an episode or storyline for everyone when it came to this show. They touched on some of the most taboo plots in the most graceful way.

Now, don't you just want to go and watch all the seasons of Boy Meets World one more time? I know I do.

More like this
“The Door Is Always Open” For Another 'Breaking Bad' Spin-Off, Says AMC Boss
By El Hunt
6 Shows Like Stranger Things To Get Over Your Emotional Season 4 Hangover
By Kadin Burnett
20 Photos Of "Beefy" Jeremy Allen White To Tempt You To Watch 'The Bear'
By Radhika Menon
All The Sneaky Lindsay Lohan Movie Easter Eggs In Her New Ad, Explained
By Stephanie Topacio Long
Get Even More From Bustle — Sign Up For The Newsletter