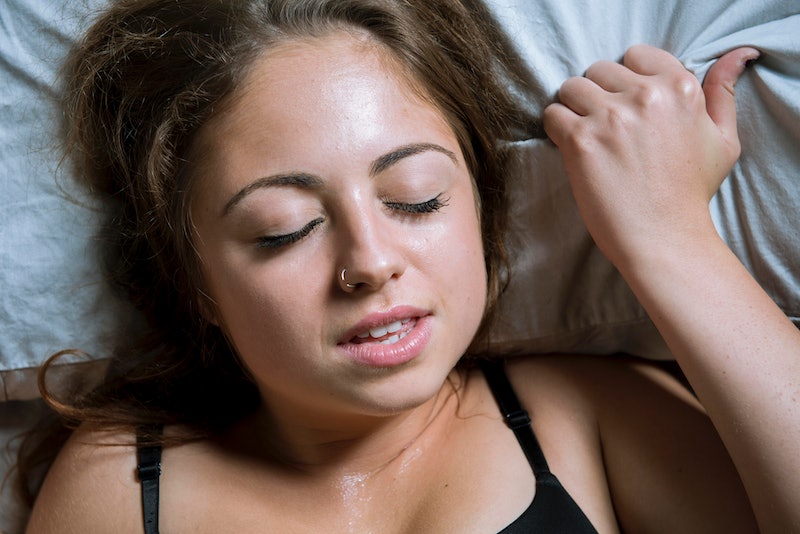 Many people tend to believe the more orgasms, the better. But according to research, that thinking may actually be wrong. In fact, believing that an orgasm should be the end game of sex can actually be hazardous to your relationship. When couples view sex as a sort of goal-driven activity, scientists call it the “orgasm imperative.” In other words, sex is only seen as "successful" when orgasms are reached. But that thinking can lead to emotionally damaging thoughts to an individual’s self-esteem, which in turn, can negatively affect the relationship. The pressure to reach or even just give your partner an orgasm can inflate your expectations. If those expectations are left unmet, one or both partners may be left feeling inadequate.

"The act of having an orgasm every time we have sex in itself is not damaging to one's relationship. Focusing on the orgasm being the required outcome of sex is potentially damaging," couples and sex therapist, Lisa Yee tells Bustle. "When we place the focus of sex on the orgasm, it sets us up for failure."

According to Yee, there will definitely be times throughout our lives when having an orgasm is just not achievable. When this happens, it's often translated as there being something wrong with the individual. That can cause anxiety and avoidance of sex altogether. For a couple, that avoidance leads to withdraw and disengagement between partners. Women know men tend to view sex as a goal-driven activity. As a 2010 study of 71 women published in the Archives of Sexual Behavior found, 80 percent of women fake their orgasms. More than 90 percent of those studied said they become more vocal during sex just to boost their partner’s self-esteem, and many women even admitted to faking it because they knew their male partners would keep going until their female partner had an orgasm.

But instead of focusing on the orgasm being the outcome of sex, a better goal would be to engage in activities that feel good and promote a sense of intimacy and closeness between the couple, Yee advises.

"Orgasm can be included in these activities but not necessarily required in order for sex to be complete," Yee says. "This idea is demonstrated in the circular model of sex where there is no set end point, only agreed upon activities that are enjoyable. Our culture still focuses on the linear model of sex where orgasm is set as the goal."

In other words, sex shouldn't be thought of as a sport in which you play to win. It's one of those things you participate in to feel good and have fun. Here are some tips for couples to enjoy sex without having it be all about the climax.

1. Communicate What You Want Sexually

As Yee recommends, couples should create their own circles of consensual sexual activities that they enjoy as a way to identify new activities or more importantly discuss what is pleasing to them sexually.

Couples should create a list of activities that fit into certain time frames or by level of energy required. They will be more likely to kiss and massage one another if the pressure of a happy ending is removed.

Touch is the basis of intimacy, and the more we touch our partners the closer we will feel. "Taking the time to focus on where your partner likes to be touched and how will result in better sexual satisfaction and overall sense of intimacy," Yee says.