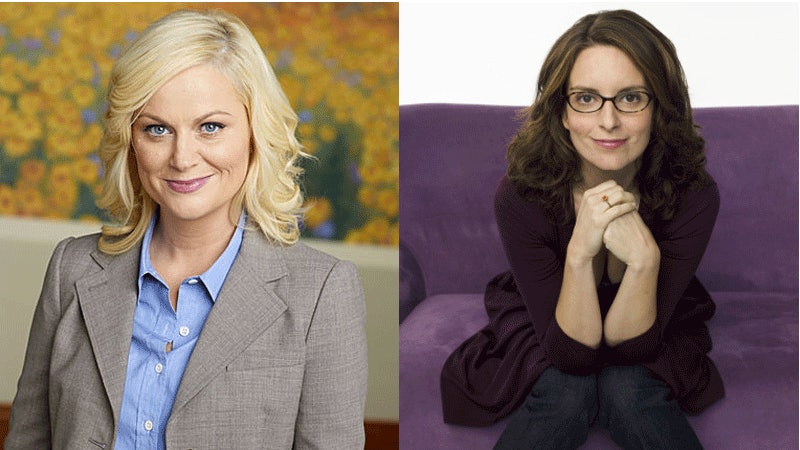 The newest episode of Parks and Recreation will be a momentous one in the show's history — and not just because it's the last episode to feature Rashida Jones' Ann Perkins and Rob Lowe's Chris Traeger. Thanks to NBC's preview clip of this week's "Ann & Chris," we now know that Parks is going to basically quote 30 Rock. Even better, Leslie Knope is going to quote Liz Lemon.

In the clip, Leslie says, "There ain't no party like a Leslie Knope party, 'cause a Leslie Knope party is actually 30 parties." If that sounds familiar, it's because it's very similar to a line from 30 Rock's Season 4 episode "Khonani," when Liz says "there ain't no party like a Liz Lemon party, 'cause a Liz Lemon party is mandatory." Special thanks to Tumblr user "Drunk Knope" for making the association in GIF form (and for having an amazing Tumblr name).

And while this might be the first time that Parks has a quote so similar to 30 Rock, it's definitely not the only thing the two amazing NBC comedies have in common. Their main characters, Liz and Leslie, share many similarities besides the first syllable of their names. There's the obvious, that they're played by Tina Fey and Amy Poehler, both former SNL cast members/improvisers/comedy queens/flawless human beings/perfect awards show hosts/role models of a generation. But there's more.

Here's the quote that inspired the comparison.

And here are just some of the many things that Liz and Leslie share, and make them two of TV's greatest women.

Liz and Leslie are both bossy in the best possible way — Fey's Bossypants way. Liz has a group of crazy writers and performers to manage, and Leslie has to keep the Parks department motivated. Neither one is afraid to take charge and lead the way, whether to TGS or the Harvest Festival.

Even though Liz and Leslie both tend to run things, they both also have actual bosses, Jack Donaghey and Ron Swanson. Both are strong men who are usually emotionally unavailable, but have a soft spot for their favorite employee.

Both Liz and Leslie embrace their inner age. They're not old, but they know they want nothing to do with youths anymore and that's okay. They're too sophisticated for any young nonsense.

When Liz and Leslie were single, they didn't let Valentine's Day get them down. Instead, they made it their own. Leslie turned Feb. 13 into Galentine's Day, when women celebrate each other, and Liz celebrates Anna Howard Shaw Day on the 14, in honor of the women's suffrage leader — unless she's busy getting a root canal.

After years of strange dates and failed relationships, Liz and Leslie both found love. More importantly, they found love with men who support their career ambitions. Ben Wyatt and Criss Chros are two of the luckiest men in the history of TV.

In case Liz and Leslie weren't perfect and relatable enough, they both also love Harry Potter.

Equal to Men and Will Prove It

Being ardent feminists, Leslie and Liz know they are equal to men and will do whatever it takes to prove that to the haters out there, even if it means changing a very heavy water cooler or becoming a garbage woman for the day.

Into Some Strange Stuff

Leslie and Liz both embrace their sexuality, no matter how, um, interesting, it might be. For Leslie, that means some political role playing with Ben, for Liz it's getting sexy in a Staples.

Can Rock a Pantsuit

Look at that, do I really need to say anything else?

Have Some Sweet Dance Moves

Leslie knows the proper way to celebrate and Liz took her moves to the big leagues, kind of.

Not Afraid to Confront the Haters

If you go after Liz or Leslie, beware. They're not afraid to fight back and stand up for themselves, their friends, their jobs and anything else that's important to them. Liz might have a slightly more aggressive approach, but neither is willing to take any shit.

This really shows just how resilient Liz and Leslie are. If they can both come back from this, they can survive anything.

The Importance of Food

Finally, what might just be the biggest similarity between Liz and Leslie, their love for food. They might have different favorites (cheese and waffles, respectively), but in the end, they're both happy as long as there are plenty of snacks available.