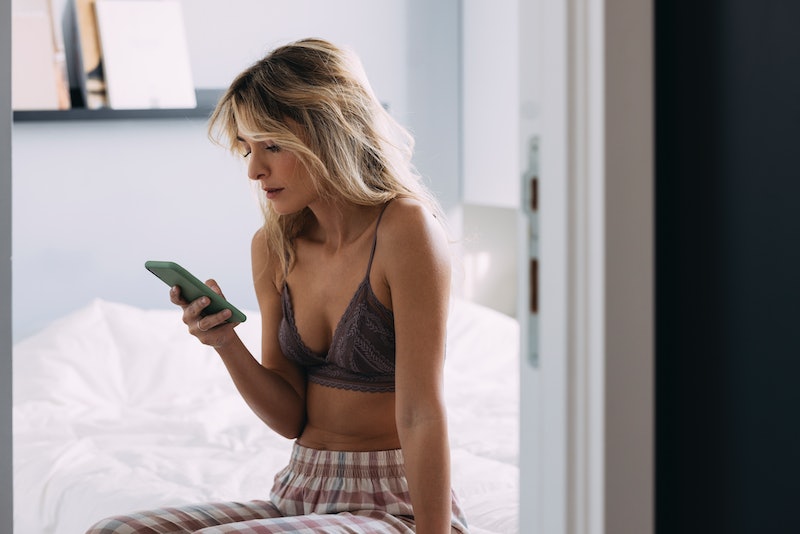 I'll admit: The first time I bought a bra, I didn't really know what I was doing. I was 14 and had no idea what bra size was right for me. But thankfully, after many trials and errors, I learned perhaps one of the most important things when choosing a bra: how to know if your bra cup is too big. It was a little embarrassing at first, but then I realized that having the right cup size was actually much more comfortable than trying to fit into one that was way too large or too small for me.

When I was young and naive, I used to pretend to have a bigger cup size than I actually did. I learned the hard way that it was totally silly of me to do so, because in the end, it was so uncomfortable. I hated wearing a bra and I had no idea why it hurt so bad (even though the answer was pretty obvious).

According to a study published by PRNewswire, "75 percent of women have difficulty finding a bra that fits properly" and a whopping 85 percent are "wearing the wrong size." That's a majority of women, y'all. While that might sound ridiculous, I can definitely admit to being part of that percentage. But after understanding that I was wearing a cup size too big, it all made sense why I was so uncomfortable this entire time. When it comes to bras, finding the right size — from the cup to the straps — is super duper important.

If you've experienced any of these following things, you might want to recheck if you're bra cup size is too big:

You Have To Constantly Readjust

If you're constantly trying to readjust your bra, you're likely to have a bra that doesn't fit right. I remember trying to continuously pull the front part of my bra down from going up all the time. No matter how loose I made the straps, my bra would always somehow become misplaced. Pick a bra that is comfortable for you throughout the day.

Your Cups Are Wrinkled

If the cups of your bra become wrinkled it means that there isn't enough to fill in the missing spots. Sometimes though, wearing a push up bra will hinder your way of finding the wrinkles, so keep an extra eye out for looseness in your cups when wearing one.

Your Bra Isn’t Comfortably Supporting You

When you start to get back or neck pain, it's a definite sign that your bra size may be the wrong one. Whenever I wore my bra I always tried to make the straps super tight to fill in the cup size, but that ended up creating a horrible tension in my shoulders. Comfortability is always important, so when it's not happening, something definitely needs to be changed.

Your Band Keeps Riding Up

According to Seventeen, "Your band should fit firmly and horizontally across your back. If it's riding up in the back, it's too big. Go down a band size, like from a 36 to 34." This was also a huge problem for me, nothing ever felt snug and comfortable. I always had to pull down the band on my back.

You're Using The Tightest Hook

If you're using the tightest hook and it's still loose, it's definitely a sign to buy a bra size smaller. For me, personally, I tried to used the tightest hook to compensate for the loose space in the cup, but it clearly did not work or feel comfortable.

The main thing to remember, is that it's all about comfortability!