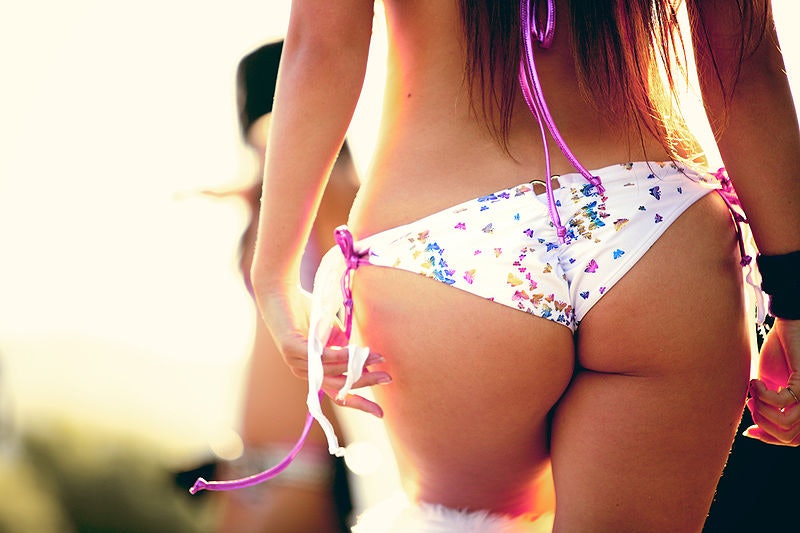 Writer Emily Weiss over at Into The Gloss had her beauty story about her wedding go viral this week — in large part because she took the radical step of getting colon cleanses in the weeks before the ceremony. As prep for weddings go, it's not as intense as some regiments I've heard of, but it's definitely one of the most scientifically problematic. Colon cleanses, or colonics, function by pumping gallons of warm water into the colon via the rectum to eliminate "waste build-up," and claim to produce glowing skin, a sensation of wellness, and generally make your insides as shiny as a newborn's skin. The problem? They're based on completely debunked medical myths — and have the potential to be harmful, even dangerous.

The colon is the final part of the digestive system before waste is eliminated through the bowel and bladder; it's the last bit of the large intestine. Colonic irrigation has, according to historians, been around as a concept since the ancient Egyptians and Romans, but its recent rise in popularity over the past few decades (Princess Diana admitted she was a fan) has been accompanied by an increase in medical concerns about the practice. Not a lot of scientific work has been done on the colonic and its effects, but we're beginning to look at the bigger picture, and it seems that a lot of the assertions that come with pushing colonics as a beauty and lifestyle aid are actually nonsense.

So before you take the step of booking a colonic appointment as part of your 2016 wellness journey, give this a read and assess whether you think the evidence says it's really worth it.

The thought behind colonics in alternative medicine is pretty simple. They're designed to eliminate "build-up" of waste inside the colon that has stuck to mucus on the walls, something called "mucoid plaque". Getting rid of that built-up waste, the theory goes, will make people more able to absorb nutrients and feel healthier. The problem? Mucoid plaque and waste build-up are a myth. As far as scientists can tell, they don't exist.

Mucoid plaque has been touted by alternative medics for years, including, famously, a spot on Gwyneth Paltrow's GOOP site, where it's recommended that people doing a cleanse get a colonic because extra mucus "stays adhered to the walls of the colon, blocking the elimination of what needs to be disposed of". But it's nonsense, for several reasons, the biggest of which is that the colon is already self-cleaning.

The fact is, medical professionals have never seen any sign of it. Dr. Edward Uthman, an assistant professor at the University of Texas, has "seen several thousand intestinal biopsies and have never seen any "mucoid plaque". This is a complete fabrication with no anatomic basis. The small and large intestines normally secrete mucus for lubrication, but it does not form into any type of 'plaque.'". And when the Wall Street Journal interviewed the gastroenterologist John I. Allen on the topic, he said "I've seen a lot of colons and the notion that people have pounds of feces and evil toxins built up in there is pure fantasy." It's viewed in the medical profession as a "non-credible concept" (i.e. complete hogwash).

More broadly, colonics are supposed to remove "toxins" from the body, presumably ones that are hanging around because of waste material stuck in the gut. The problem is that this is a myth as well: the body's liver and kidneys are excellent removers of potentially harmful materials in the body, and if they're working well, there's no reason for any extra help to be required. The healthy human body rids itself of waste in fecal matter and urine, and doesn't need any help. There's no real chance for the lining of the colon to become "sticky" at any point, either, since it's shed every 72 hours. Trust your system to do its job, people.

3. They May Mess With Your Microbiome

Some gastroenterologists (though not all) are concerned that the practice of colon cleansing actually washes away beneficial mucus and microbiomes that help the health of the gut and the waste system. The microbiota in your colon have an important role to play in maintaining your immune system's ability to detect and fight foreign antigens, and colonics, by washing out the entire area, may risk throwing the baby out with the proverbial bathwater. Result? Lower immunity. Not great.

A colon cleanse could also change the electrolyte levels in your body, like sodium and potassium, leading to consequences for your heart, blood pressure, and other parts of your system. (It's worth noting that a small study from Japan on 10 healthy subjects didn't find much change in electrolyte or micro biome levels after colonics, though; this is something we're still figuring out.)

4. There Are Health Risks To The Procedure

Maybe you've looked at the myths and the possible bacterial compromise, and still decided that you want all the waste gone from your system (even though there's likely not anything abnormal weighing you down). But there are also risks to consider, and they're not pretty.

The definitive study on the real dangers of colonics came from Dr. Ranit Mishori and her team of researchers, who did a comprehensive study on colonics in 2011 and came up with a host of risks on their report card. Not only were colonics not apparently doing much good to healthy people, they were also causing potential harm. “Every time you put something where it’s not supposed to be in the body, you can poke tissue, make holes and disrupt architecture,” Mishori told TIME magazine.

What are you risking when you undergo a colonic for a medically unnecessary reason? Abscesses, a risk of dehydration, perforated bowel, or infections that were accidentally introduced via the tube used for the colonic, for a start. Sounds like fun, doesn't it.

5. They're Not Weight Loss Remedies

The idea that colonics will help you shift weight is a slightly confusing one. Whatever is flushed out during the colonic isn't actually hanging around building up and making you weigh more; it's just your natural stool and additional water weight, and they're both very easy to "gain back" when it comes to pounds. It's also not going to cleanse your body of toxins, and it won't help nutrient absorption or stop the body from absorbing as many of them, as all the nutrients from consumed food have been absorbed before waste matter hits the colon.

Sorry, guys: if you're looking to slim down before your wedding, this is not the way to do it. (Oh, and neither are juice cleanses.)

6. They're Only Medically Recommended For Severe Constipation & Colonoscopies

There are only two reasons that medical professionals recommend colonics: to flush out very severe constipation when no other means have worked, and to prepare the body for a colonoscopy, where a very narrow camera is inserted via the rectum to look at the inside of your colon. (And those pre-colonoscopy procedures don't produce heaps of mucoid plaque, funnily enough.)

Other than that, the medical consensus is that colon cleanses are both unnecessary and have the potential to harm. It will be expensive; and it's cleaning waste build-up that doesn't exist. It's your choice, but the science says that it's a poor idea.