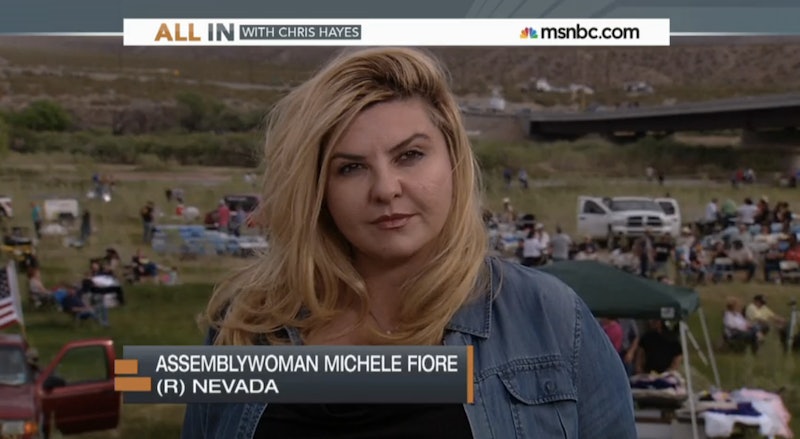 For over a month, a militia group, headed by Ammon Bundy, began occupying the Malheur National Wildlife Refuge in eastern Oregon in protest. Now, with the help of Nevada lawmaker Michele Fiore, the Oregon occupation has come to a close ... and it didn't go out with a bang. The Nevada Assembly member who sympathized with the militia's cause tried to convince the group to surrender peacefully. Per request of Bundy, Fiore traveled to Portland, Oregon to meet with other legislators and show support for him and 15 other militia members who were arrested. Initially, she reportedly planned to advocate for the occupation, but that has changed. Via conference calls that were broadcasted live in real time, she acted as a mediator between the militia and the government.

On Wednesday night, Fiore spoke to the militia group, who sought to take up arms against the government in an attempt to turn over control of federal land to local ranchers. They were also protesting the sentencing of two local ranchers who were convicted of arson. On Jan 26, 2015, the militia was left to fend for itself after several members, including two of its leaders Ammon and Ryan Bundy, were arrested at a traffic stop.

Fiore had been negotiating with member Sean Anderson, who agreed to surrender if she and another man, Franklin Graham, met them in person at the refuge on Thursday. Fiore talked Anderson up, so to speak, agreeing that his anti-government stand-off is noble and praiseworthy. In the past, she supported Cliven Bundy taking arms against the government in 2014 when they attempted to arrest him for ranching on federal property.

Contrary to Fiore's portrayal of the occupiers as "martyrs," much of America has called the militia members domestic terrorists. Although they haven't caused violence, they were nonetheless directing an armed occupation.

Fiore's plea to the militia to drop their weapons was ironic because she is an avid Second Amendment supporter, to say the least. The Las Vegas lawmaker became a controversial figure after, among many other incidents, she released a particularly disturbing Christmas card in which she and her family members posed holding guns. What better way to deliver a peaceful Christmas spirit? The card lists the name of the guns from left to right. Going berserk over Obama's executive orders on gun safety is one thing, but this photo is a whole other. Parents in the photo cradle their toddlers with one hand and grasp a gun in the other. A young boy stands in the front wielding another handgun.

And this isn't the first time Fiore has donned her weapons in front of the camera. In November 2015, she also released a calendar that featured — you guessed it — Fiore displaying firearms.

Out of all people to bust the occupation ... this woman seemed to be the least likely. But that's what makes her story intriguing. Fiore is a self-proclaimed gun nut, but she may have used her leverage as a second amendment supporter to convince the Oregon occupiers to choose peace instead of bullets. The irony is greatly welcomed.