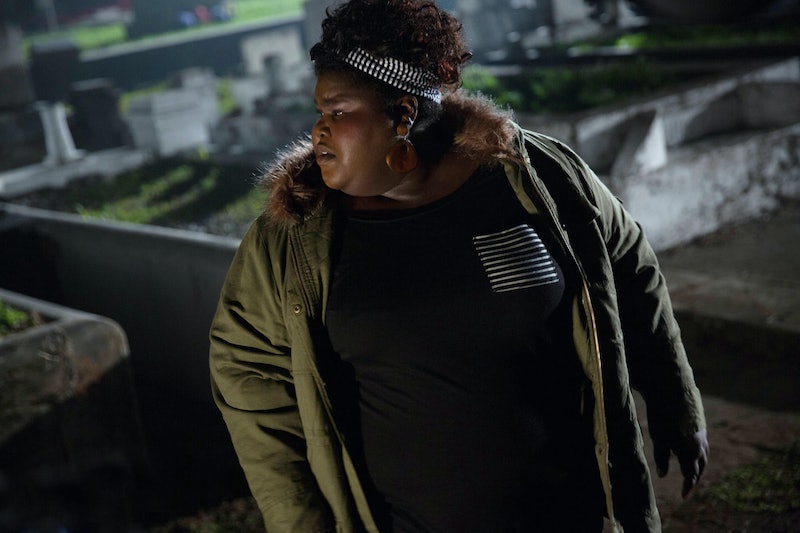 Finally, American Horror Story has delivered the goods, or should we say, the Goode? Cordelia Goode has been crowned rightful Supreme, Fiona is wasting away in her own personal hell with the Ax Man, Madison and Misty are dead, Zoe and Kyle are together forever as Cordelia's right hand gal and butler. Queenie's alive and well too, sitting opposite Zoe as Cordelia's council, but throughout the finale she was treated as an accessory — a remnant of the series' extra, unnecessary plot line. But Queenie deserves more than that.

Throughout the entire season of AHS: Coven, Queenie has been given the tough lot. She was the sexually frustrated character doomed to an encounter with a murderous Minotaur. She was the one gullible enough for Fiona to pull in on her scheme to take down Myrtle and the council. She was the one who felt left out among the other girls in the coven so she had to turn to her incredibly racist maid, Madame LaLaurie, for some semblance of friendship. She was the one whisked away to Marie Laveau's home base, only to torture LaLaurie, get shot by Hank, and use her human voodoo doll skills to shoot Hank and herself in the head. When she comes back, Fiona tries to trick her into thinking she's the next Supreme and then she heads into the Seven Wonders, with no narrative clues even slightly suggesting that she's a possible candidate for the supremacy.

This is a character who's withstood horrible commentary about her weight — thanks in great part to Madison — played by an actress (Gabourey Sidibe) who's withstood far worse since she's been on this series from real people on Twitter. (And who responded perfectly to those horrible people quite recently.) Yet, her character has always been pushed the edge, seemingly present only to prove how futile it is to try to change the mind of a racist murderess, LaLaurie.

It's extremely frustrating to see Sidibe's character, with so much potential, be relegated to serving as the anchor for what proved to be Coven's most useless plot: the voodoo storyline. Once we reached the end of the season, it was clear that Marie and Madame LaLaurie served no other purpose than to muck up the coven plot line and keep things nice and shocking — a fertility ritual here, some zombies there, a horribly violent flashback over here. The two characters had nothing to do with Fiona's demise — sure, they are why Papa Legba presided over Fiona's new personal hell, but did we really need him to be involved when her death was the sole doing of the new Supreme rising?

While Queenie was the one to take out Madame LaLaurie — something of a personal victory, especially after LaLaurie spouted that speech about not regretting anything (along with a bat over the audience's heads in the form of a newsreel of Anthony Weiner and Paula Deen) — she's still the champion of a side plot whose only real victory is that it ended early enough to get out of the way of the real point of the show.

When we get to the Seven Wonders, everyone else in the running bows out in some epic motion. Misty dies in a dream that finds her in grade school, killing and resurrecting a frog over and over again while her science teacher yells at her. Madison goes out like the villain she became in the final few episodes: killed in a crime of passion by Kyle, who's furious that she won't resurrect Zoe. Zoe impales herself on a fence during the transmigration test, only to be resurrected as a part of Cordelia's big Supreme-making moment. Even Myrtle gets an epic desert send-off in a gorgeous red gown when she's selflessly burned at the stake. Queenie, falls out of the running for Supreme and then finds herself as errand girl for the remaining trials, where her biggest victory is telling Madison she failed the divination test. That's all they wrote.

Luckily, our dear Queenie didn't suffer a fate as flat and unfair as Nan's — being drown in the tub by two desperate, soon-to-be powerless women — but she still was left as a side character and a puppet for Cordelia's mind control test. Zoe holds arguably as much weight in the series — despite the illusions of grandeur that we had for her at the outset — yet, she's actually involved in the finale in an emotional and plot-heavy manner. Queenie is just around and her failure during the Seven Wonders is merely expected.

Of course, there was nothing that could be done once the character had been established as accessory rather than A plot. Her big finale came with LaLaurie's and that was supposed to be enough. And perhaps it would have been, if that entire plot didn't feel like a pair of shiny keys dangled in front of our faces simply to keep us from getting bored with the "Who's the new Supreme?" question that took far too long to answer.

But Queenie deserved a better storyline, and so did we.