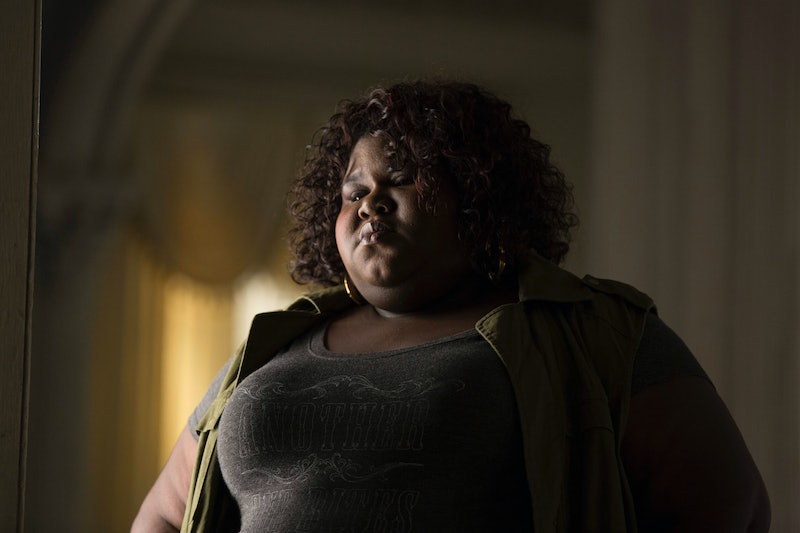 Now, I'm not talking about the people who expressed shock at Queenie's encounter with a Minotaur — the idea of a human woman getting it on with the half-beast and his hoofy hands is a tough pill to swallow. But that didn't seem to be the issue for many fans: It was the fact that Sidibe, a plus-size actress known for her role in Precious, dared to touch herself on national television during a show that's already featured blood, gore, torture, rape, incestuous rape, death by intercourse, and voodoo rituals riddled with boiling semen and goat's blood poured on Sarah Paulson's vagina. Masturbation is really just the tip of the iceberg at this point.

It's disgusting to see such blatant hate thrown at a woman whose only crime is not looking like most other women in Hollywood; it's even worse to see so much of if coming from women on Twitter. But it's nothing new. When AHS: Coven was creeping into its season, fans took to the brain dump box that is Twitter to express their surprise that Sidibe hadn't bothered to lose weight to earn her spot on AHS while others simply proliferated unimaginative digs at her size, using hashtags like "#big" and "#scary" to describe her casting.

It doesn't take a genius to see what terrible prejudices Sidibe faces simply for being who she is while employed on a wildly popular show. And you don't have to be a saint to know that the people who've taken to social media to express the offensive thoughts they just couldn't keep to themselves deserve to have their Twitter mouths shut off. I'm sure Jessica Lange's character has some sort of spell for that.

What's inexplicable is the fact that in this day and age of complete transparency (thanks to the public nature of social media) people on Twitter still think it's alright to shame a woman for her body shape in hopes that strangers might find their measly AHS hashtag, agree with them, and award them a literal internet gold star — or if they're really lucky, a retweet. These fans, and a slew of others just like them, value virtual pats on the back above behaving like decent humans with respect for their fellow living beings.

In honor of all this recent Twitter mayhem surrounding AHS, I offer this new rule: In lieu of a TV-MA rating — which apparently isn't a strong enough warning to those with weak souls that they might see something unlike their own lives which might cause them to leap to the internet with hate and bigotry — let's have the Television Counsel flash a new message along the lines of, "If you are a terrible person, please turn off your television now." The universe doesn't need their hateful, idiotic commentary filtering our enjoyment of a show that's supposed to be fun, pulpy horror. Think of it as "time out" for adults who apparently never learned how to behave around other humans without making complete asses of themselves.

And hey, if that doesn't fix them, at least we wouldn't have to witness their mind-numbing thoughts every time we clicked on the AHS hashtag for the dose of social media group therapy most of us need after watching the actual horrors on American Horror Story.