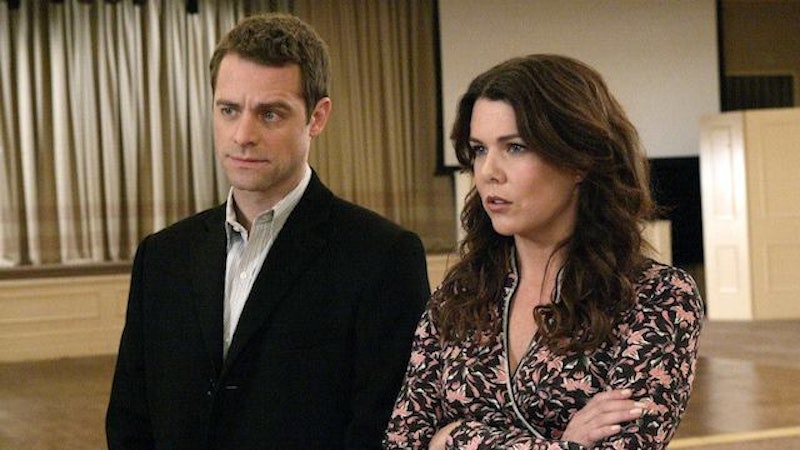 The inevitable has happened and David Sutcliffe's Christopher is returning for the Gilmore Girls revival. For Luke and Lorelai fans, this news is no doubt conjuring up painful memories of Seasons 6 and 7. Christopher has always been the ultimate spoiler in Lorelai's relationship with Luke (and even her relationship with Max). The former high school sweethearts, and parents of one Miss Rory Gilmore, always seemed to find their way back to each through fights, unexpected pregnancies, and promising relationships with other people. This time is going to be different though. I suspect Luke and Lorelai will have nothing to fear from Christopher.

While Christopher is a divisive character thanks to his role in the end of Luke and Lorelai's relationship, he is an integral part of the show. From Season 1 on, Christopher went on his own character arc as he grew up, started taking responsibility for his actions, and figured out to be a good father to Rory and Gigi. The show has thoroughly explored Christopher and Lorelai as a couple. They've been married and it didn't work out. That doesn't mean Christopher stops being family though.

His presence in the revival is only natural given the circumstances (Richard's death), and I certainly don't think he is returning to cause trouble for Luke and Lorelai. Here are 11 reasons why it is way too soon to start pushing the panic button because, for once, Christopher has more important things to do than act as a romantic trump card.

1. The Gilmore Girls Will Need His Support After Richard's Death

2. Lorelai & Christopher Already Had Their Chance

Christopher and Lorelai were married, and it didn't feel right for them. Lorelai summed it up perfectly when she said, "you're the man I want to want." For years, they wondered about what kind of future they could have had, but they have their answer now. To put Christopher and Lorelai together again after all they went through would be a retread, and the revival is about moving forward.

3. If Luke & Lorelai Haven't Gotten It Together By Now, They Never Will

Real talk time: I say this as someone who loves Luke and Lorelai more than pizza (which for me, is saying a lot), but if those two have went back to dancing around their feelings then Christopher won't be the problem. They have had ample time to decide if they want to be together — it's been nine years since the series finale. If they haven't made it work, then this time it is on them.

4. Christopher & Luke Need To Make Peace With Each Other

Punches have been thrown and harsh words have been exchanged. Luke and Christopher need to make peace with each other for Rory and Lorelai's sake.

5. Lorelai & Christopher Will Always Be Friends

What kind of friend would Christopher be if he stayed away from Lorelai forever? Through it all, they've been pals first, and even a broken marriage shouldn't change that.

6. Rory Deserves A Relationship With Her Dad

The series left off with Luke and Lorelai very much on the road to being back together. Lorelai made a conscience choice to be with Luke. I think the doubting and wavering period is over between these two.

8. Richard & Emily Were Fond Of Christopher

Christopher has been a part of the Gilmores' lives since he was a teenager. He had a strong bond with Emily and Richard, but especially Emily. It would be majorly disrespectful if he didn't show up for Emily when she always had so much faith in him.

If Luke can see Christopher and Lorelai in the same room together without being jealous, then Luke and Lorelai are definitely forever this time.

10. They've All Had Nine Years To Sort Their Lives Out

Hey, Christopher could be married to Sutton Foster at this point. It's important to remember the characters haven't been frozen in time. Years have passed, and it would be too sad if they were still making all of the same mistakes.

11. Luke & Lorelai Were Always Going To Be Endgame

No one, not even Christopher, has the power to stop the inevitable. Luke and Lorelai were written in the stars. Who is going to argue with the stars?

Christopher's name has the power to strike terror into the heart of most Gilmore Girls fans, but the revival needs him — and not to repeat history. He has a role to play, and I don't think that role will involve breaking any hearts this time around.