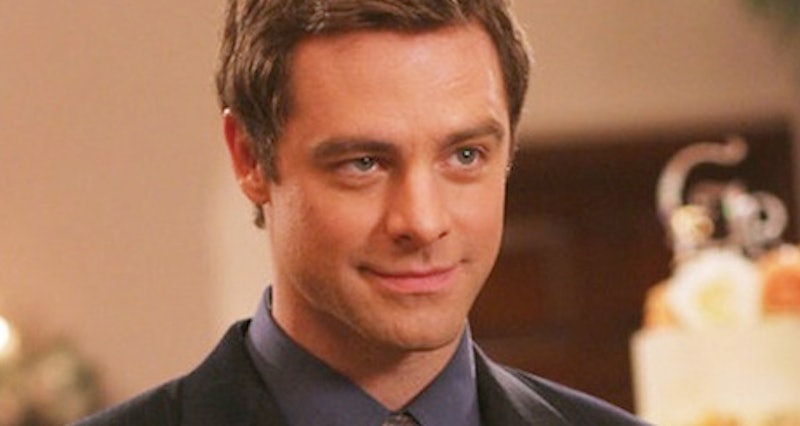 The Gilmore Girls news just keeps on coming, with confirmation that Christopher, Rory Gilmore's dad, will be back for the Netflix revival! Having been absent for most of Rory's childhood, Christopher came to Stars Hollow in Season 1 to try and make amends, having previously offered to marry Lorelai when she found out she was pregnant. She refused, but Christopher and Lorelai went on to have an on-and-off-again relationship of epic proportions, which included further marriage proposals, eloping to Paris, and cheating on their partners. Any Gilmore Girls reunion would be incomplete without the character, as played by David Sutcliffe, which is why it's such great news that the actor has joined the revival. But what exactly will Christopher be doing in new episodes of Gilmore Girls ? Does anyone have any theories?

While most of us are likely hoping for a Luke and Lorelai love story (please god please!), it's possible that Christopher is still in the picture romantically. Even though Lorelai and Christopher ended their shotgun marriage amicably, they were high school sweethearts and have a child together, so the pair are inextricably linked. However, neither of my two theories involve Lorelai and Christopher getting back together, because I'm just not feeling it, folks.

First off, a likely scenario is that Christopher returns to Stars Hollow for his daughter, Rory's, wedding. While there's still a lot of speculation about the plots of the new Gilmore Girls episodes, with all of Rory's ex-boyfriends returning to the show, it seems likely that her love life will be a focal point. After all, in a totally kick-ass move, Rory famously turned down Logan's proposal at the end of the initial run of the series, instead choosing to be single. Is Rory now at a time in her life where she's ready to reconsider the people who have played important roles romantically for her? While I'd much rather see a Luke and Lorelai wedding (Lauren Graham thinks they're still together), it'd make sense that Rory Gilmore might be picking a suitor, and her dad would probably return for the wedding if there was one.

A second option though, and one which I think is more likely, is that Christopher is dying. I have absolutely nothing to base this theory on, apart from the fact that some characters are probably going to have to get killed off when Gilmore Girls returns, and Christopher seems like a safe bet. Think about it — it'd be completely heartbreaking and life-changing for Rory, and would force her to rethink all of her choices. It'd also be a huge thing for Lorelai, if her high school sweetheart and former husband was gravely ill. Call me crazy, or a monster, but I think that Christopher is a prime contender in the category of who will die when Gilmore Girls returns. I'm sorry, but he is.

While we wait to get more details of the Gilmore Girls revival, it's probably worth taking to the Internet and discussing all of these theories and more in excruciating detail. Makes sense, right?