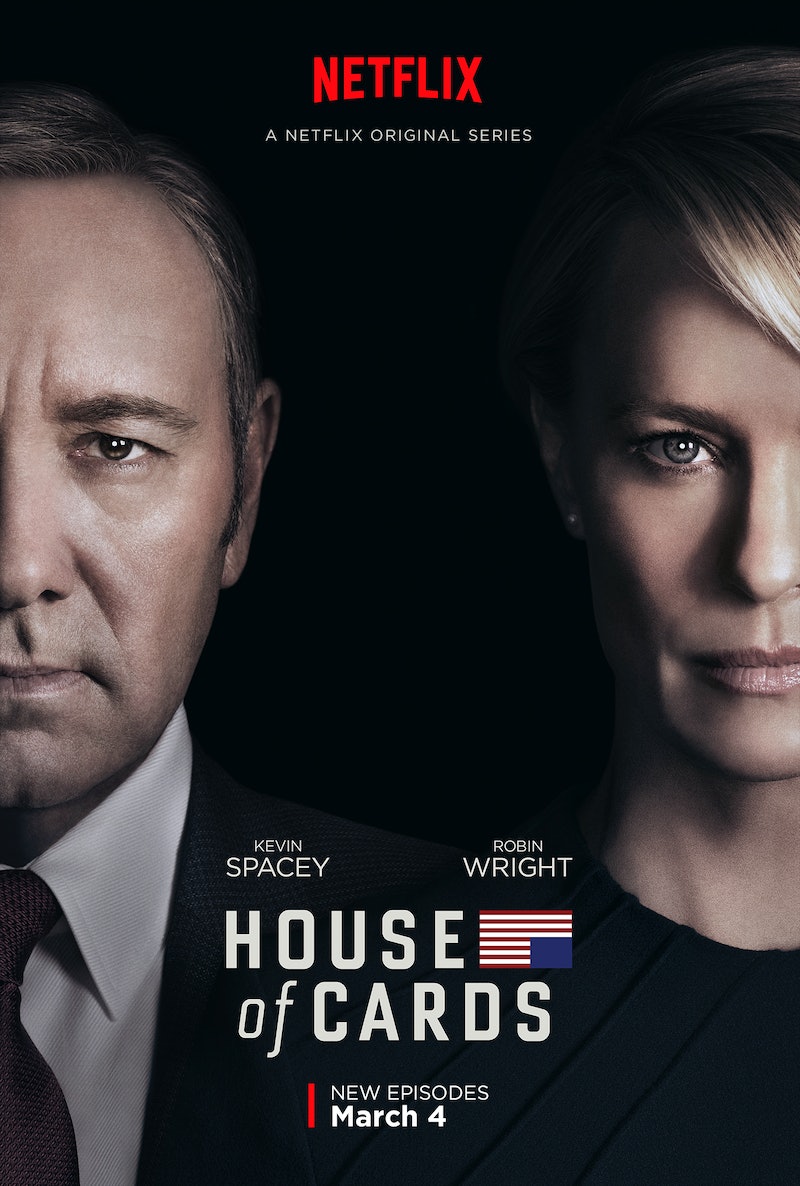 Thank goodness Netflix already went ahead and announced that they have renewed House Of Cards for Season 5, or this new trailer might have tricked us all into thinking that the upcoming fourth season of the political thriller would be the show's last. The 60-second promo is jam-packed with bizarro imagery — including guns, sex, and selfies — and the footage is cut with such a sense of mounting dread that it would be easy to imagine all of this insanity culminating in a violent finale that leaves just about every major character dead or dying. As it is, we know that the House of Cards Season 4 trailer isn't showing us the end of the show … but it could very well be the beginning of the end. After all, President Frank Underwood's precarious house of cards must come crashing down at some point, right?

Season 4 will very much be a new chapter for the series. It's the first that won't feature Frank and Claire as a terrifyingly unified front. Season 3 ended with the First Lady walking out on her husband … and this trailer very much lives up to the promise of that cliffhanger, providing plenty of tense moments between the separated spouses. It also provides blink-and-you'll-miss-em introductions to some of Season 4's new faces, played by the likes of Neve Campbell, Joel Kinnaman, and Ellen Burstyn. Let's break this nightmarish promo down beat-by-beat and examine the 19 most WTF moments.

Although underscored by Frank's menacing voice ("You have no idea what it means to have nothing"), Claire's is curiously the first face we see in the trailer, peeking out from a door frame. Netflix is really positioning this as the Season of Claire, aren't they?

We're only 19 seconds into our first official look at Season 4, and already guns are being drawn. It's hard to tell the identity of the person pulling a pistol from their desk drawer. In the iconic words of Barry Manilow: "There was blood and a single gunshot, but just who shot who?"

Well, that's certainly menacing. Who is this tattooed inmate? And who exactly is he intimidating? Is that a bearded and bedraggled Lucas Goodwin, last seen in prison after being set up by Gavin Orsay and his pet guinea pig, Cashew? Is the show resurrecting the storyline of Zoe Barnes' shocking death in Season 2?

Neve Campbell (Scream, Party of Five) is one of Season 4's newest faces, although we don't know much about her character just yet, other than that she's "power-hungry" (who on this show isn't?) and that she'll try to "take down" the Underwoods. All I can say to her is good luck.

The man on the right is a barely recognizable Joel Kinnaman, very much cleaned up from his scruffy appearance on AMC's The Killing. The woman he's canoodling with is a bit of a mystery, although she bears more than a passing resemblance to The Blacklist's Liz Keen in a blonde wig, don't you think?

Multi-Oscar-nominated actress Ellen Burstyn also joins the cast of Season 4 in yet another mysterious role. This is getting exhausting …

A strange scene, as Frank seems to pursue Claire through a crowded room full of strobing lights. (… Or is she leading him?) It's all very surreal.

There's Kinnaman and his girlfriend again, taking a moment from the chaos to snap a selfie. Ignoring what they're doing, that's just a fantastically framed shot, isn't it? It could almost be a classical painting if you just take the cell phone out of his hand.

What's going on here? A rally of some sort erupts into chaos, people either running or cowering as Secret Service agents comb the crowd with guns drawn. Some sort of assassination attempt against President Underwood, perhaps?

It's that Civil War reenactor from Season 2. What's he doing inside an office? And who's he pointing his rifle at?

We already spent the greater part of last season watching Doug laboriously recover from his head injury. Who is bedridden this time, how did they get there, and will they ever recover?

Why is there blood coming out of this faucet? Is it a dream sequence? A Biblical plague? A Flint-like water crisis? Whatever it is, it sure looks cool.

It's hard to tell because most of his face is obscured, but that seems to be Press Secretary Seth Grayson whom Doug Stamper is attempting to suffocate with a water glass. I … I have no idea what's happening anymore.

Is that Claire mounting her estranged husband in some sort of attempt at reconciliation (or manipulation)? Or is this some sort of Monica Lewinsky-type White House dalliance? Hard to tell.

Somebody's finally smacking Frank around while Claire appears to watch, and I'm already loving everything about this scene.

Who is that? Is he really about to commit suicide? If so, why is that important to Frank and Claire's story? What's going on here?

"I saw a future. Our future," Claire says. "We had a future until you started destroying it," Frank responds. We see him wandering through the forest, approaching this Presidential limo with an evocative pair of legs waiting for him. I NEED TO KNOW WHO'S INSIDE. I NEED TO KNOW WHAT'S GOING ON. I NEED SEASON 4 RIGHT NOW PLEASE.

House Of Cards Season 4 will debut on Netflix on Friday, March 4. In the meantime, watch the full trailer right here:

More like this
Yes, That Is Victoria & Another ‘BiP’ Alum In Zach’s ‘Bachelor’ Trailer
By Kadin Burnett and Grace Wehniainen
Everything To Know About 'RHONY' Season 14
By Jake Viswanath and Alyssa Lapid
Netflix Bumped Up The 'You' Season 4 Premiere Date — Here's What To Expect
By Bustle Editors
Everything To Know About 'Andor' Season 2
By Gretchen Smail
Get Even More From Bustle — Sign Up For The Newsletter