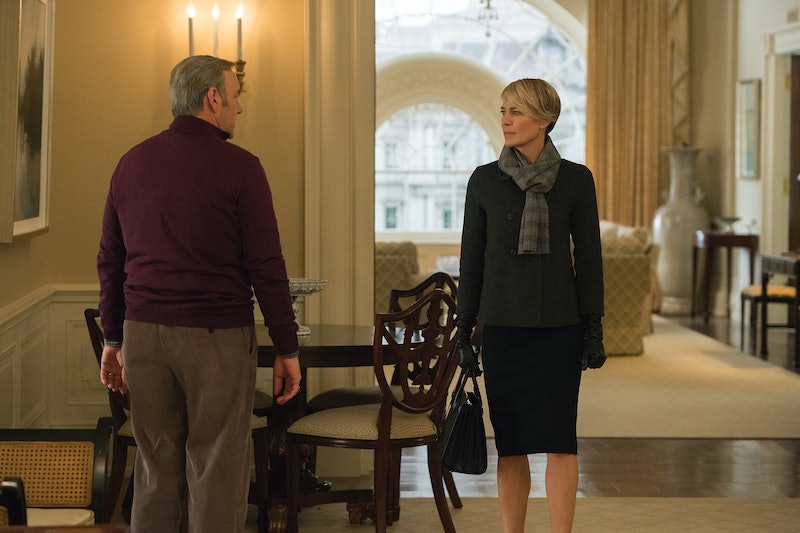 It happened, y'all. Claire Underwood finally emerged from her black Easter egg like a swan or a phoenix or whatever bird metaphor you want to use — preferably a grown, majestic-looking bird. At the end of the Season Three finale of House of Cards, Claire left Frank Underwood. The most powerful and dangerous open marriage in Washington D.C. is kaput. The final scene alluded to Henrik Ibsen's famous play A Doll's Houseas Claire walked out of the White House with her husband calling after her. Where can House of Cards go from there? The show's strength was in that relationship. However, after the events that transpired this season on Netflix. I'm all for this new development.

This may just be my memories of Jon and Kate Plus 8 talking, but I am absolutely convinced that vow renewal ceremonies are the kiss of death in a marriage. As soon as the Underwoods went through this ritual in the middle of the season, I knew they were doomed. The twisted marriage of Frank and Claire Underwood was in the spotlight now that they moved into the White House. However, it really wasn't all that twisted? There were no threesomes or kinky Father's Day sex (never ceases to disturb me). I don't think Meechum had more than three or four lines, total. I kept waiting for one or both of them to hook up with the novelist Thomas Yates, played by Boardwalk Empire's Paul Sparks.

Instead, that whole novel plot was exceedingly boring. I didn't even like Zoe Barnes all that much and I miss her now more than ever. Frank hired a man to write a book about him that would market his America Works program, also known as AmWorks. In a poetic and not all that believable twist, Yates decided that his book instead needed to be an expose of the cold, calculating, businesslike marriage that the Underwoods have. Even the other characters were confused as to why he thought he could pull that off.

You could tell something was up with Claire. She flinched when Frank touched her shoulder! She changed her hair... twice! In the finale, Frank returned from a campaign event to find Claire sitting at the desk in the oval office. This wasn't the first time in the episode that she mimicked her husband's behavior. When advised against going for a run, Claire got out the old rowing machine. Spooky.

Is this Claire Underwood's ultimate goal, the Presidency? The season hinted at it more than once. In the first half of the season, Claire wanted the diplomatic experience of being an ambassador so that she could run for office someday. Later, the breast-feeding civilian woman wished that she were running instead of her husband. When you look at her character this way, it's hard not to compare her to Mellie Grant on Scandal . I get it — being First Lady must not be fun if you have political ambitions of your own. It takes a certain kind of woman, and that is neither a compliment nor a criticism. I absolutely cannot wait for the first ever "First Husband" to take on the role out of sheer curiosity.

Back to the Underwoods, Claire explained to Frank that she was longing to have her independence back. He asked, "what is wrong with asking for my help when you need it" and she simply replied "the fact that I need it." Their debate dug into gender and marital roles, then plummeted. Frank got so ruthless and so just plain mean in that scene that I was longing for the First Lady to assassinate the President right there in the Oval Office. Leaving him the next day was obviously the next best option.

There were several moments in House of Cards third season that were deliciously upsetting, from the ease at which crowds of middle class White Americas started chanting "you are not entitled" to the primary debate that Frank orchestrated in which both Jackie and Heather made sexist attacks on one another. That shouldn't be possible, and yet here we are. With that in mind, this was a satisfying feminist end to the thirteen episodes. I have never been more excited for what the upside-down world of House of Cards has planned for Claire Underwood.