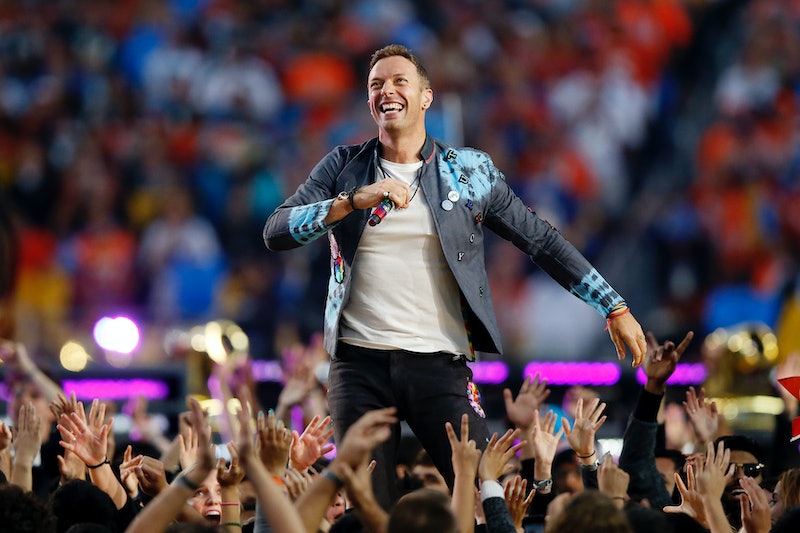 When it was announced that Coldplay would headline the halftime show at Super Bowl 50, many people were confused and mainly because, well, the band is one you either love or you hate. (Plus, their music doesn't exactly go with football.) Opinions surrounding Coldplay's music are definitely strong with no happy-medium. And the same can be said when it comes to the band's lead singer: Chris Martin. With that, I'm just going to ask the question you know you've been wanting answered for awhile now: Is Chris Martin hot or not?

I mean, he was married to the gorgeous Gwyneth Paltrow and reportedly dated the beyond beautiful Jennifer Lawrence. So, Martin is totally hot, right? Obviously, that's a strong assumption, but it seems like that's the most logical answer. Maybe I'm a bit biased, because I do find him attractive. Actually, it wasn't until I watched Martin and James Corden's carpool karaoke that I realized just how hot he is. Maybe it's that smile? He is always smiling!

Whatever the case, after polling Bustle writers and readers, I think it's safe to say that the question definitely is one that received mixed responses and some passionate opinions.

These People Are Totally Into Him

"He’s like sneaky hot. You don’t expect to think he’s attractive and then he’s performing and suddenly it’s like OH SH*T, YES." - Kelsea

"CHRIS MARTIN IS A DREAMBOAT and I love him so much :’(" - Lindsay

"I am not physically attracted to him, but I think he’s a great musician and when I saw Coldplay in concert I was like, 'WHOA I LIKE CHRIS MARTIN NOW.'" - Melissa

"I think Chris Martin is hot and I don't even know why. I've never been attracted to blonde guys in my life and he is like the palest of the pale. But I'm into it. Maybe it's because I like the song 'Homecoming' by Kanye so much?" - Sam

"My mom is attracted to Chris Martin, which makes me feel like I shouldn't be... but I am." - Martha

"I think the ugliest thing about him was Gwyneth so yeah, he's attractive!" - Stephanie

I told you some people have strong opinions about him!

"He is interestingly attractive. Not Hollywood attractive, but definitely worth looking at twice!!!" - Suzanne K.

"I definitely think he's attractive in an innocent type of way. And even more attractive when he sings!" - Sara

These People Can't Even Look At Him

Yeah, I don't see the resemblance, but I LOVE Harry Potter references.

"He's not. He is just not hot. There's nothing more or less to it." - Rosanne

"No. He. Is. Not. He is more forgettable than Ryan Reynolds in a lead role. I HAVE A LOT OF FEELINGS ABOUT CHRIS MARTIN'S ABJECT LACK OF PHYSICAL APPEAL OKAY." - Kadeen

"When I watched Coldplay's video with Beyoncé, at the beginning I was like, 'Whoa chris martin's kinda hot,' then they did a closeup of him that showed his piercings and I was immediately turned off." - Lia

"I don't think he's hot because to me he's always kind of looked like Gwyneth's brother? They just look related, so when they were married it was distracting." - Nicole

"I say no solely because of the type of music he plays." - Cori

These People Aren't Sure What To Think

"Ah, that's a toughie. I would say not, only because he's not my cup of tea. I just personally don't find him attractive. Something about his face. But I can understand that other people may find him hot! Like, he's not ugly by any means. (Basically, that's a diplomatic answer because I dont wanna offend those who do find him hot. But yeah, it's a no from me.)" - Jamie

"I don't have a particularly strong opinion about him either way, but when I was watching the Super Bowl people at the party I was at were talking about it and getting into a debate about him! I don't find him attractive solely based on looks, but as soon as he sits down at that piano and starts crooning 'Fix You' the attractiveness level goes up several notches." - Anonymous

Clearly, this is a very accurate study, so it's apparent that Chris Martin is hot. OK, just kidding, but I do think it's safe to say that he's a very divisive guy — more so than I could have ever expected. Basically, Martin is an interesting specimen who can either woo people with his music, voice, and smile, or get a solid, "No, thank you."