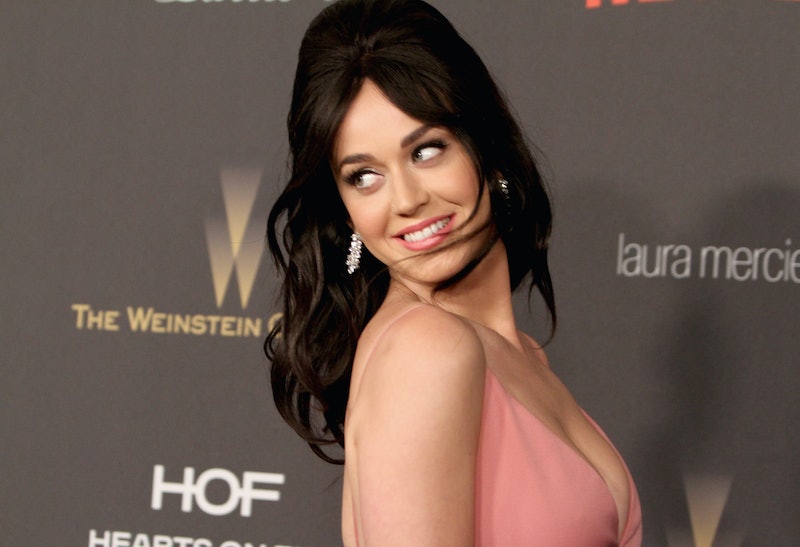 It's been over two years since Katy Perry released her last album, PRISM , and her fans are starting to get restless. In May 2015, the 31-year-old pop star's manager, Steven Jensen, reportedly said that her next LP would be out "by 2016." But, obviously, that didn't happen. So, when is Katy Perry's new album coming out? Unfortunately, it doesn't seem like it'll be here anytime soon. Perry told the New York Times' Joe Coscarelli that her fourth studio effort is still in the "research and development phase" during a recent interview. "I've been going at it for eight or nine years in the spotlight, and then before that there's that decade of hustle that never gets recognized but still shows up in your wrinkles," the singer said. "So right now I'm taking a little time. I don't want to jump on any trends. I just need to evolve."

This news is bound to be a little disappointing for hardcore Perry fans, but it sounds as though she's taking things slow for the right reasons. Today, many artists take very short breaks in between releases, presumably in attempt to keep their names out there and "stay relevant." And though I can see the value in that approach for newer, less established acts, Perry is a household name — and has been for years.

She's also a pop music icon with a legacy to protect. Rushing out a new album just for the sake of keeping up with the Ariana Grandes and Meghan Trainors of the world would be a mistake. Personally, I'm glad she's easing off the gas a bit.

But, she's still keeping busy. Now that she's conquered the Super Bowl halftime show and finished her Prismatic World Tour, Perry's latest project is a party exclusively for musicians (no managers, publicists, or members of the press allowed), which will be held in downtown Los Angeles on Saturday — just two days ahead of the 2016 Grammy Awards. "Artists are always looking for a way to connect with each other, but we don't get that authentic connection because we're either being pulled or pushed," Perry explained in her aforementioned New York Times interview.

(Spotify is sponsoring the event, but Perry said Adele and Taylor Swift — two artists who have opted to keep their latest albums off the popular streaming service — are still welcome to attend. "It's just up to their schedules," she stated.)

Speaking of the Grammys, the New York Times reports that Perry won't be attending the ceremony on Mon., Feb. 15, but she said she'll happily watch the telecast at home in her PJs, "eating matzo ball soup." Take all the rest and relaxation time you need, Katy. When you're ready to put out something new, your fans will welcome you back with open arms.

More like this
What Is Mary J. Blige’s Net Worth? The 9-Time Grammy Winner Is Doing “Just Fine”
By Hugh McIntyre
The History Of Taylor Swift's "All Too Well" & What The Lyrics Actually Mean
By Jake Viswanath
Tour Rehearsals Didn’t Stop Taylor Swift From Attending The 2023 Grammys
By Jake Viswanath
The 12 Most Controversial & Unexpected Grammy Moments Ever
By Jake Viswanath
Get Even More From Bustle — Sign Up For The Newsletter
From hair trends to relationship advice, our daily newsletter has everything you need to sound like a person who’s on TikTok, even if you aren’t.