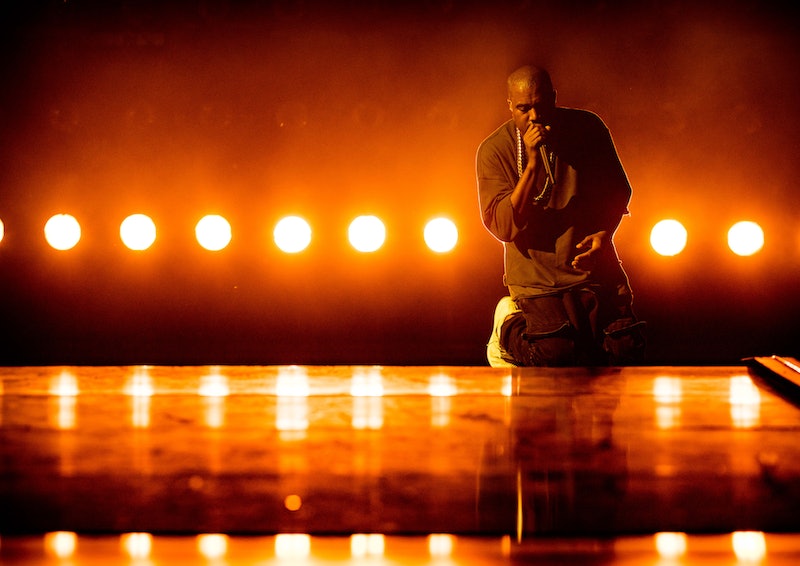 Well, it looks like The Life of Pablo is here to stay. Kanye West dropped album art for his upcoming record via Twitter Thursday afternoon, and it's a pretty dizzying affair. Frank Ocean-orange with the record title printed over and over across its length, The Life of Pablo features a tiny photo of a wedding in the bottom left. It comes after weeks of West's equally dizzying indecisiveness about the very title that this album art features so prominently, but if the album art is any indicator, The Life of Pablo is really what "T.L.O.P." was all about.

The album art still doesn't shed any further light on who, exactly, this Pablo is to West. Prior to the album title announcement, West posted that it would be called T.L.O.P. without giving his audience a clue about what that acronym might mean; he then wrote on his Twitter that "anyone who figure out the title gets tickets to Season 3 and free Yeezys." Many of us were left wondering if T.L.O.P. itself was the album title, no acronym necessary, and further wondering whether the album title was going to change again; it had already evolved from SWISH to Waves and, briefly, So Help Me God prior to T.L.O.P. and The Life of Pablo.

The Life of Pablo art comes from Peter de Potter, West wrote on his Twitter Thursday — de Potter is a Belgian artist and writer who has collaborated with Raf Simons, according to Interview Magazine, the Belgian designer formerly known as the creative director of Dior. With album art, conceived by a respected artist, no less, it seems unlikely that West will change his mind about the title. Though, honestly, if "Cold" is any indicator, even after the track has been released its title might still be liable to change.

Twitter has been the forum in which West has made all his major announcements about his upcoming album, and it's also the forum in which his fans have taken to discussing what Pablo might mean. Is it Pablo — Picasso? It wouldn't be too much of a stretch for West, who already declared himself a presidential candidate for 2020, to start comparing himself to the father of cubism. But there's no sense of cubism, surrealism, or really much of any modern art in the album cover as it stands now. Except, like, word art.

And yet, the album art still doesn't give us a better sense of who Pablo is and why West will rap about his life. Till the album drops, it could make for a fun word-association game. The Life of Pablo — Neruda? The Life of — Pi? Might it not mean anything at all? Work with us here, Kanye.

More like this
Adele Says Postponing Her Las Vegas Residency Was “Brutal”
By Alyssa Lapid
Adele Says It Would Be “Wonderful” To Have Kids With Boyfriend Rich Paul
By Jake Viswanath
Lizzo Proved She’s Team Jeremiah During Her ‘The Summer I Turned Pretty’ Review
By Grace Wehniainen
Rihanna Is America's Youngest Self-Made Woman Billionaire, According To 'Forbes'
By Hugh McIntyre
Get Even More From Bustle — Sign Up For The Newsletter