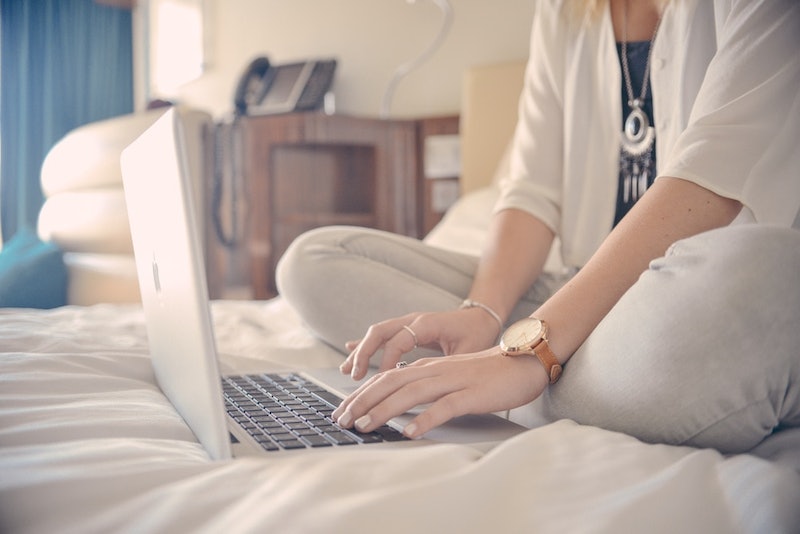 I'm a writer. At least, that's what it says on my college degree, and I sunk way too much money into that thing to turn back now. So I know firsthand that dating a writer is truly the pinnacle of all dating experiences. We're always eager to make you a cup of coffee, in order to mask our own crippling caffeine dependency. We're not burdened by the stress of wealth or steady work. And years of rejection and brutal workshop critiques have ground down our self worth, while also somehow increasing our egos. The life of a writer is filled with glamour, wrist cramps, bouts of weeping, and comparison shopping for pens. We're the full package!

Now, obviously everyone wants to date a writer. Non-writers want to date writers so that they can feel better about their own job security. Writers want to date other writers, because no one else will have them. But how can you be sure that your special someone is actually a writer? How do you know that they're actually working on a screenplay/novel/experimental poetry chapbook? What if they're some kind of financially stable banker trying to trick you? Well, here are a few pointers for identifying the writer in your life:

It's a little known fact, but many writers will actually talk about being writers. A lot. Like, constantly. This is because complaining about not having enough time to write is one of the keys components of the writing process. So if your significant other is always sighing sadly and telling you that they wish they had more time to work on their play before returning to their game of computer solitaire, that's a key sign that you may be dating a writer.

2. You Are NOT ALLOWED to Read Anything They Write

Another key sign of dating an aspiring (or even published!) author is that they are VERY PARTICULAR about who can read their writing and when. If you accidentally catch a glimpse of their manuscript before it's ready, they may react with anger, tears, or stress eating. If they do let you read their writing, however, that may mean that the two of you have established a very trusting relationship (or that they're trying to trick you into becoming their full-time editor).

3. They Promise They're Not Writing About You

That character in their short story? The one who looks just like you and has the same job as you and is also allergic to macadamia nuts? That character is definitely not based on you. Any true writer will swear up and down that they are not stealing your life story and putting it into their fiction. Nope. Definitely not.

4. They’re Definitely Writing About You

Look, if you're a big part of a writer's life, bits and pieces of you are probably going to end up in their writing. And that's not necessarily a bad thing — as long as you're not dating a writer who writes for the internet. Then you'd better hope that they're writing for a PG rated website (or make it very clear to them which parts of your relationship are acceptable to share with strangers online).

Most writers enjoy filling their shelves with notebooks, and then filling those notebooks with doodles and abandoned first chapters. This is great, because you can get away with giving them paper and writing utensils instead of real gifts. It might backfire, however, when they start giving you diaries and nice fountain pens and encouraging you to follow through on your new years resolution to "start journaling."

6. You Can Always Talk to Them About Books

Writers and readers make for a great pair. A telltale sign of dating a writer is that they're always ready to listen to your list of reasons why the movie didn't live up to the book, and they never get tired of hanging around bookstores. They'll be genuinely enthusiastic about poetry readings and events held in libraries, and you'll never have to drag them to a literary event — most writers will be thrilled at an excuse to leave the house.

7. ...But Sometimes They Talk Too Much About Books

8. They Text in Full Paragraphs

When you first set out to date a writer, you may have been hoping for love letters and poetry. What you will probably receive instead is lengthy, unedited, stream of consciousness texts and Facebook messages, because writers are usually better at writing than at saying words with their mouths. At least their texts usually have a solid story arc.

9. They Need Their Alone Time

A sign of a true writer is the occasional need to be alone. What do writers do when they're alone? Who knows, because their manuscripts haven't changed by a comma (although two bottles of wine are gone). Writing is an introverted process, and your writer isn't trying to blow you off: they genuinely need time to stare blankly at the wall muttering to themselves and browsing baby name websites until they come up with an idea.

Another sign of a true writer is the constant need for validation. When they're not moping around taking alone time, they're smothering you with attention. Because the rest of their lives are full of rejection! So they need a little affirmation that they're not garbage people once in a while!

11. Sometimes They Go All Day Without Putting on Pants

There are two kinds of writers: those who sit in a coffee shop all day to write, vibrating with caffeine and wearing interesting hats. And those who sit at home in their pajamas and/or underwear to write, and rarely if ever encounter daylight. Both are valid species of writer, but its important to read the signs early so you'll know if your relationship will be spent in a hip coffee shop listening to indie rock, or in a cramped studio apartment with three strangers from Craigslist.

This is the one surefire way to know that you've captured the heart of a writer. If the person you are dating is really, truly a writer, then your positive energy will inspire them when it comes to their writing (I'm not promising that you'll like what they write, but you'll be somewhat responsible for it). So, congratulations! It looks like you might be dating a writer. It's up to you if you want to keep them or not, but enjoy your reclusive, artsy S.O. while it lasts.