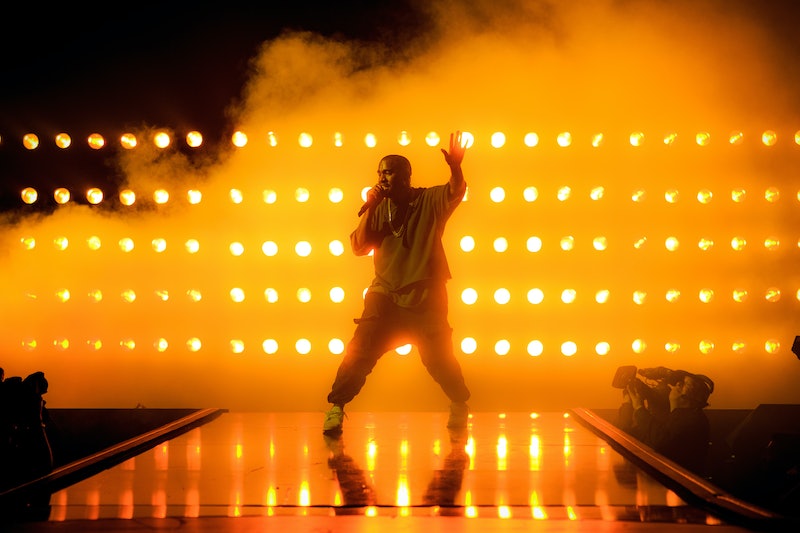 Update: As of 1:43 a.m. ET on Feb. 14, The Life of Pablo appears to be streaming on TIDAL. Those wishing to download the album can purchase it from TIDAL for $20. The album is, so far, unavailable on iTunes. On Monday evening, Kanye tweeted that The Life Of Pablo will only be available on Tidal. He wrote: "My album will never never never be on Apple. And it will never be for sale... You can only get it on Tidal." Earlier: Kanye West just cut the cord on The Life of Pablo, his seventh solo album and the soundtrack for the third season of his eponymous fashion line Yeezy. The record store in on the waves of "Ultra Light Beam," a powerhouse gospel-cum-rap anthem featuring Chance the Rapper. And as the album continues to play, models standing stoic at the center of Madison Square Garden, I can already hear the keys frantically typing, "Where can I download The Life of Pablo? "

The track isn't available on iTunes or TIDAL yet, and it probably won't be until the show is complete — but Yeezy Season 3 is streamed live from Madison Square Garden on TIDAL, and with it, the entirety of The Life of Pablo. TIDAL has been the hot spot for many musical moments over the past few weeks, from Rihanna's ANTI to Beyonce's surprise single "Formation." (Also, West gave a shout out to TIDAL near the close of Yeezy Season 3.) So it's likely that the boutique streaming service will host The Life of Pablo when Kanye deems it ready to unleash on the world to stream. And it's likely that iTunes, still the one of the biggest hubs for downloading music online, will eventually get The Life of Pablo.

The one place where you probably won't spot Kanye's latest album any time soon is Spotify. Though Rihanna eventually released ANTI on the seemingly ubiquitous streaming service, it has taken many TIDAL albums a decent chunk of time to make it over to the streaming platform.

In the meantime, it might be a comfort to know that Kanye plans to continue releasing new music on Fridays, so you'll be able to stream a few new tracks while we wait for The Life Of Pablo to appear on more mass streaming services.