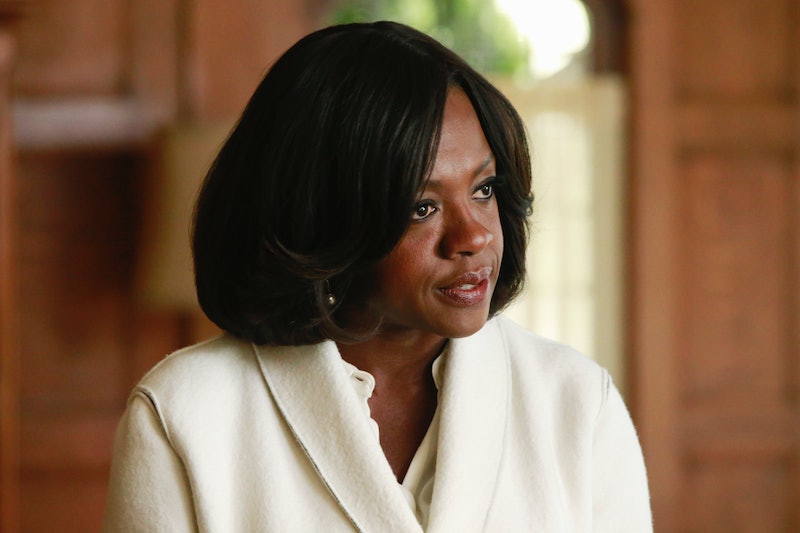 During the fall finale of How To Get Away With Murder, fans speculated that Annalise killed Wes' mom. But, that was before we learned on Thursday that Annalise knew Wes' mom at one point. I still think Annalise could be responsible for her death, but the reason why could be totally different now. In a flashback from 10 years ago, we saw Annalise sit down next to Rose (Wes' mom) on a bench at a playground, and, get this, Annalise was pregnant. Although it didn't seem like the two ladies were besties, they felt comfortable enough with each other to have a chat about babies. Rose asked if Annalise was having a boy since she was carrying low, and Annalise replied yes and that the thought of having one scared her. Then they made some polite chit chat while Rose pointed out her own son on the playground. Frustratingly, she didn't call him by name so who even knows if it was Wes or if Shonda Rhimes is just messing with us.

Anyway, I have a theory. I think that Annalise was pregnant and that Wes was the name of her son. Either he died shortly after birth, or she miscarried, but something happened to that Wes. Enter Rose's son, Christophe. Now, maybe Annalise killed Rose to get Christophe as her own kid. Or, maybe it was just a coincidence that Rose died but then Annalise adopted Christophe, changed his name to Wes to honor her own lost child, and then got scared and gave him up again thinking she couldn't do the mom thing.

Perhaps those pill-induced hallucinations Annalise had where Rose was giving her a baby was a reference to Annalise taking her son in. Maybe Annalise's terror at being given the child was referencing her own cold feet she experienced after adopting Christophe/Wes. Maybe she regrets giving him back up and her happy cuddling of the nonexistent baby at the end was her wishing things had gone differently.

I'm not sure, but you can bet the fact that Annalise knew Rose is going to change everything.

More like this
Julie Andrews Revealed A Surprising Behind-The-Scenes 'Bridgerton' Detail
By Grace Wehniainen
Jesse Tyler Ferguson Had A Funny Run-In With A Fellow ‘Modern Family’ Alum
By Grace Wehniainen
“The Door Is Always Open” For Another 'Breaking Bad' Spin-Off, Says AMC Boss
By El Hunt
Kimberly J. Brown & Daniel Kountz Looked Back On Their ‘Halloweentown’ Romance
By Stephanie Topacio Long
Get Even More From Bustle — Sign Up For The Newsletter