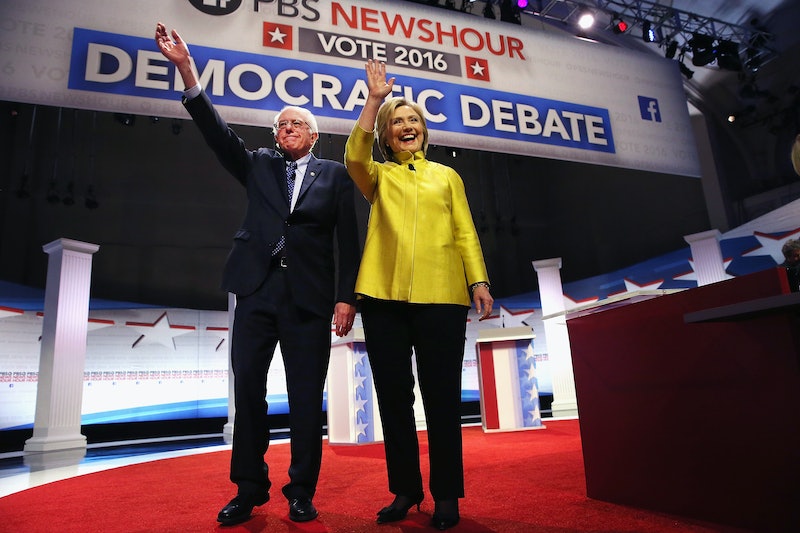 It began before they even arrived in Milwaukee for the sixth Democratic debate of the primary season: Former Secretary of State Hillary Clinton slipped out of one coat and into another that looked a little more like Sen. Bernie Sanders while delivering her concession speech in New Hampshire late Tuesday. Clinton continued her change of tune Thursday during the sixth Democratic debate, hosted by PBS' NewsHour, hijacking some of her rivals' euphuisms almost verbatim. In adopting Sanders' talking points, Clinton is making a bold grab at Sanders' less-than-loyal supporters.

Following her loss in the New Hampshire primary on Tuesday, Clinton jumped on the campaign finance reform bandwagon — something long considered Sanders' domain. "Sen. Sanders and I both want to get secret, unaccountable money out of politics," Clinton said, before reminding the audience she had been the victim of Citizens United's attack. "A right-wing organization took aim at me and ended up damaging our entire democracy. So, yes, you are not going to find anybody more committed to aggressive campaign finance reform than me," she said in a clear adoption of Sanders' rhetoric.

Clinton's adoption of Sanders' rhetoric continued Thursday. In a debate that should have served as a platform for the candidates to differentiate themselves from one another, Clinton started out sounding a lot like Sanders. In her opening statement, Clinton mirrored much of Sanders' doctrine, going so far as to even use a descriptor much-touted by the Vermont senator when describing the American economy.

Seconds after Sanders railed against the alignment of "a corrupt campaign finance system" and "a rigged economy... where ordinary Americans are working longer hours for low wages... [and] almost all new income and all new wealth going to the top one percent," Clinton said she wanted to address the fact that "Americans haven't had a raise in 15 years. There aren't enough good-paying jobs... And yes, the economy is rigged in favor of those at the top."

While Sanders criticized "a campaign finance system which is corrupt, which is undermining American democracy, which allows Wall Street and billionaires to pour huge sums of money into the political process to elect the candidates of their choice," Clinton, like a parrot, said, "We have to get unaccountable money out of our political system and... we have to do much more to ensure that Wall Street never wrecks main street again."

The more Clinton latched onto his policies and claimed the two candidates were in agreement, the harder Sanders tried to differentiate himself and his campaign from the former secretary of state. With the Nevada caucuses and the South Carolina primary scheduled for later this month, Clinton is clearly making a move to lure voters who are disenfranchised with the system from Sanders' camp by painting herself as "just like Sanders, albeit with more experience."