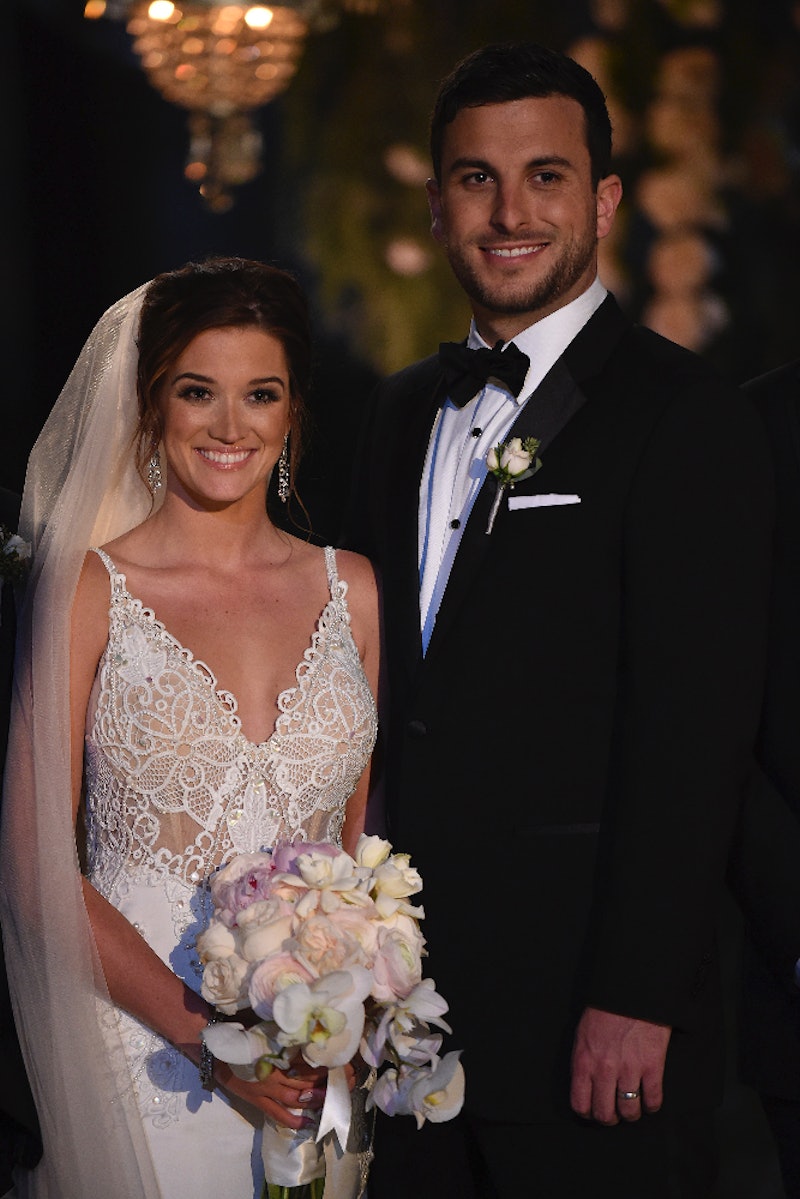 It’s official Bachelor Nation members! Tanner Tolbert and Jade Roper are married, and they’re probably the best Bachelor couple ever. Sorry, I’m biased, but after conducting a 15-minute interview with them for Bustle, it was pretty obvious to me that these two are meant to be together. The couple tied the knot a few weeks ago, and ABC is airing their wedding on Sunday's The Bachelor's 20th Anniversary Special. So, what’s it like for the two to be married? “We’ve been living together since September,” Jade says. “So, not a lot of that has changed, but it is pretty crazy when I use the word husband. I’m like, 'Oh, that’s so weird!' It’s exciting and new.” But, the real question fans have? Whether Jade and Tanner want kids and are planning to expand their family anytime soon.

Considering how fast their relationship has progressed over the past year, it wouldn't be too surprising if the pair decided to welcome kids sooner rather than later. Just to recap a bit, because I love telling their story, Jade and Tanner have been together since they met on the ABC spinoff Bachelor in Paradise , which filmed in June 2015, according to Reality Steve. In less than a year, Jade moved her life to Kansas City to be with her man. And, the couple recently announced via Instagram that they purchased land and are building their dream home. So, what about children? Should we be expecting little Roper-Tolbert babies soon?

“We both have the same goals, and we definitely both want to have children, but ideally in two years,” Jade says, to which Tanner adds, “We will start trying in like a year or so.”

Jade says that she’ll turn 30 at the end of the year, and she thinks that she will be ready to have kids once she's in her 30s. However, with how quickly everything moved thus far, Jade admits that she wouldn’t be surprised if a baby came sooner.

When Tanner and I got engaged I said I was going to wait six months and then I’m going to move in. I kept telling myself six months, six months, and then I moved in after three. So, who knows? We could be saying a year, year and a half, and in six months we may want to have kids.

Before all that, though, the two of them are hoping to go on a honeymoon adventure. “I want to take a train all the way down the Mediterranean,” Jade reveals. “I would love to start in Spain and end up in Italy or Greece.” Tanner couldn’t help but jokingly chime in, “Yeah, that’s where we’ll conceive [the baby]!”

I think I speak for Bachelor Nation fans everywhere when I say that we literally cannot wait for some Janner babies. They are going to be adorable. And, in the meantime, at least we can watch the pair be super cute parents to their furry babies!