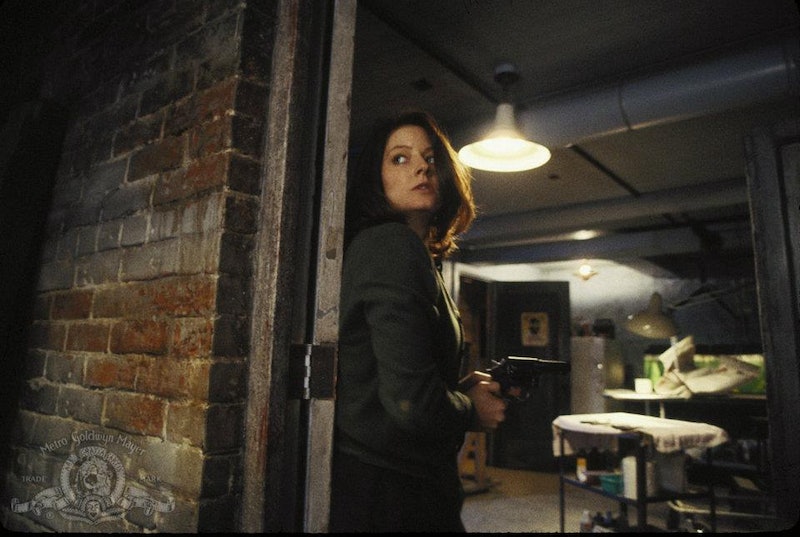 When I think of The Silence of the Lambs, I immediately think of two iconic characters: Clarice Starling and Dr. Hannibal Lecter. Their portrayers, Jodie Foster and Anthony Hopkins, both won well-deserved Oscars for their incredible performances. On the film's 25th anniversary, I wondered which actors I forgot are in The Silence of the Lambs , because the movie doesn't just star Hannibal and Clarice. Plenty of the other characters in the movie left strong impressions on the audience — most notably serial killer "Buffalo Bill."

The Silence of the Lambs was released in 1991 and immediately began pop culture's fascination with cannibalistic serial killer Hannibal Lecter. It was enough to spawn sequel films Hannibal released in 2001 and Red Dragon released in 2002, as well as the recent NBC TV series Hannibal. But in the film itself, there are plenty of folks in minor roles that you totally may have recognized or forgot were in the movie. Hey, let's remember that IMDB didn't exist back in the pre-internet days of 1991.

Check out the folks you may not have realized were also in The Silence of the Lambs below. Some of them might surprise you.

The actor played Clarice's boss in The Silence of the Lambs and has gone on to have roles in movies like The Bourne Ultimatum, Training Day, Daredevil, The Right Stuff, The Hunt For Red October, and many more.

Yup, the '90s crooner had a small part in the movie as a SWAT Commander. You know him from his hit songs — especially '90s classic "Wicked Game" — and from his roles on Friends and the movie That Thing You Do!

The actor played the infamous "Buffalo Bill" serial killer, but he has also appeared in the USA Network TV series Monk, Heat, The Fast and the Furious, Joy Ride, Wonderland, Shutter Island, American Gangster, and more.

You know this actress from playing Dr. Erica Hahn on the long-running ABC medical drama Grey's Anatomy. Years before she donned those surgical scrubs, she plays Catherine Martin in The Silence of the Lambs, a senator's daughter abducted by Buffalo Bill.

He plays Barney Matthews in the movie. Later on, audiences would get to know Faison as Deputy Police Commissioner Ervin Burrell on HBO's TV series The Wire. He has also appeared in CBS' Blue Bloods and will have a role in Netflix's upcoming Marvel series Luke Cage.

Walter plays Lamar in the film and has gone on to have a very impressive resume of appearances, with roles in everything from Matilda and Erin Brockovich to Veronica Mars and Melrose Place.

Napier played Lt. Boyle in the movie. The actor died in October 2011 and the causes is unknown, but before he did, he wrote a book Square Jaw and Big Heart , detailing his experiences in Hollywood over the years.