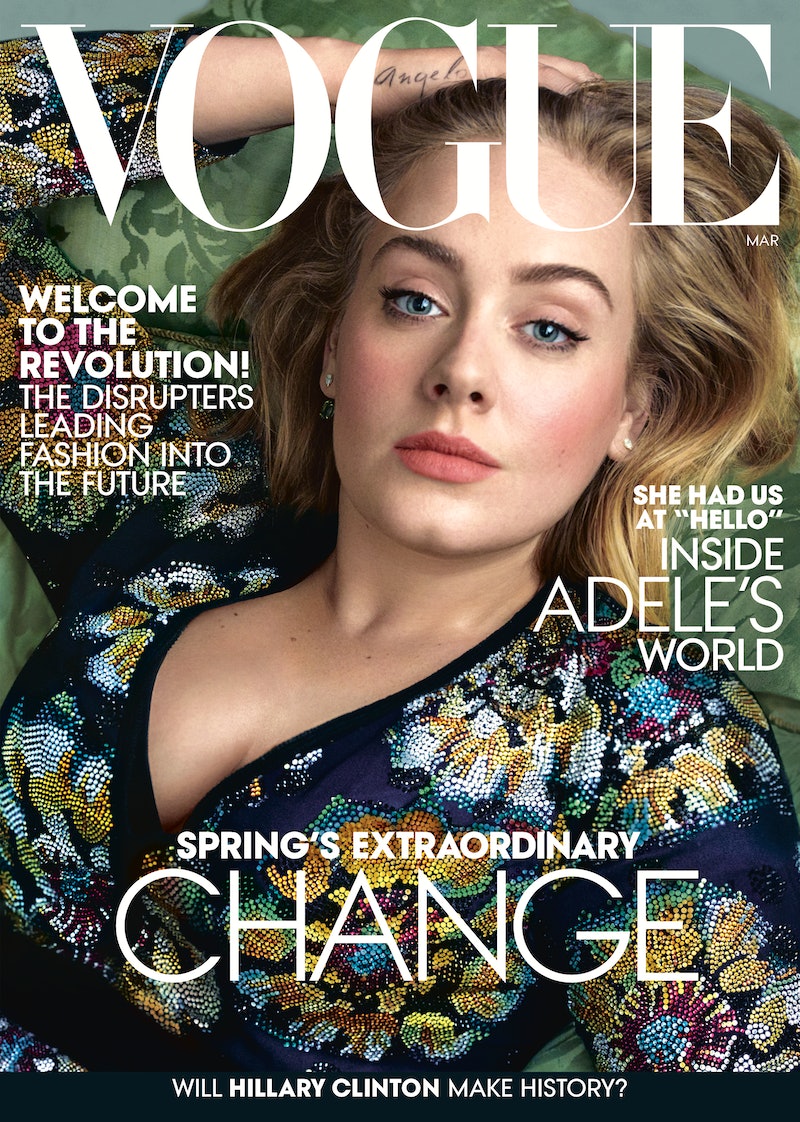 As far as magazine covers go, you just don't get more gorgeous than Adele on the cover of the March issue of Vogue . It's not her first time covering the top fashion magazine (she last appeared on the cover in 2012) but this time, she's coming off a three-year long hiatus and hot on the heels of her record-breaking latest album, 25 . The world has Adele fever, and it honestly seems like there's no cure. Her interview is quintessential Adele as she candidly reveals a lot, including who her childhood inspirations were, and it's just so good.

A lot has changed for Adele since she last graced the pages of Vogue, notably in her personal life: She gave birth to her first son, Angelo, with partner Simon Konecki in October of 2012. But the great thing about her is that she really hasn't changed, which is a good thing, in her case. She does reflect on being a little bit older, and a little bit wiser, saying, "I was just shocked that all of a sudden I was 25! But actually I like myself more than ever. I feel so comfortable in my own skin. I really like how I look, I like who I am, I like everyone that I surround myself with."

It's this exact attitude that makes Adele such a great role model not just for young girls, but for everyone, really. So, who does Adele credit as her own role model growing up?

Yep, you guessed it. Growing up, Adele, like all of us, idolized the Spice Girls! She says her "childhood highlight" came when her mom spent lots of money on concert tickets to see the chart-topping girl group live. "People always think I joke about this," she told Vogue. "But the Spice Girls blew up when I was seven. And seeing them coming from a humble background — there was hope in it. It was really a massive part of my life when the whole Girl Power thing happened."

And so, since then "any record that’s ever moved me, when the artist is alive, I’ve seen them live. I’d get pissed off if that artist was still alive and I never saw him."

In many ways, Adele embodies today what the Spice Girls embodied back in the late '90s, albeit without the sky-high platform shoes and sparkly stage outfits. Their message of "Girl Power" and equality for men and women is exactly what she strives for, even more so now as a new mom about to embark on a massive world tour. It makes complete sense that she was inspired by them, and what makes this even sweeter is that the Spice Girls reciprocate the love for Adele.

Just last month, Adele and James Corden belted out "Wannabe" for her edition of Carpool Karaoke, and it was, naturally, flawless. Immediately after, three members of the band took to social media to express their mutual love for Adele. Victoria Beckham said:

Emma Bunton aka Baby Spice also tweeted that she loved it. But the greatest tweet of all came from Geri Halliwell aka Ginger Spice, who said:

Adele makes no bones about the fact that her favorite Spice is Ginger, telling Vogue, "I connected with Geri and then I ended up finding myself at quite a young age. I used to define power by age, respecting your elders and authority figures ... I kind of define power now by having the confidence to make your own decisions, to not be swayed by other people; to be brave and fearless, to know that even if you do make the wrong decision, you make it for a good reason."