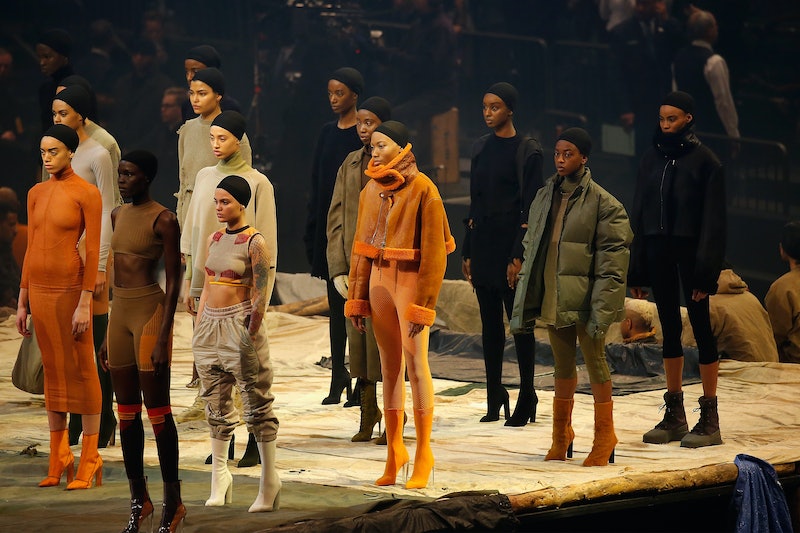 If you're a fan of pop culture, fashion, Taylor Swift, the Kardashian family, music, Lamar Odom, North West's impeccable style choices, or a user of Twitter, Snapchat, or just the Internet in general, there's a very, very good chance you already know that on Thursday afternoon, Kanye West presented his Yeezy Season 3 collection at Madison Square Garden. The show, as you might have guessed, was not your average New York Fashion Week presentation. Instead of a runway, there was a very large group of models standing where the Knicks' hardwood floors normally are. Oh, and the show also doubled as an album debut and the release of a trailer for West's upcoming video game in which players guide his mom through heaven's pearly gates. Basically, there was a lot of spectacle, even for Kanye, but in the midst of all of this there was an actual fashion show. An actual fashion show that stands out from the rest of fashion month for a pretty basic and not at all over-the-top reason: the choice of models, all of whom were people of color.

The fashion world has long faced criticism for its lack of diversity, particularly when it comes to the models chosen to walk the runway. Eighty percent of models in the Fall 2015 fashion shows were white. Click through the runway photos for pretty much any major designer and you'll see this stat in action. (Of course, even the non-white models are also nearly always the same size and shape, which is a whole other kind of diversity problem.) But West's show was different. Click through the photos for his line and you'll see a wide variety of models of color. You'll see various tones of brown, ranging from a light-skinned female model with a full tattoo sleeve to a man with a dark complexion with beads in his hair. As someone who spends way too much time flipping through Style.com runway slideshows, looking at the photos for Yeezy Season 3 feels refreshing in the best way.

The show, which used the help of casting directors Angus Munro and Noah Shelley, may have only cast models of color, yet there was still much diversity among them. Yeezy Season 3 featured everyone from up-and-coming Angolan model Amilna Estevão to 50-year-old American model Veronica Webb. I can't claim to know all of these models' ethnic histories, but I just keep thinking back to the array of skin colors shown. As a biracial person who loves checking out the shows at Fashion Month, that variety of color is just plain cool. When it comes to diversity, the idea isn't (or shouldn't) just be white versus non-white. As I see it, the ultimate goal is to have more diversity in every single runway show without cutting out white models entirely, but I don't fault West for only using models of color to help make up the deficit — because it's a very big deficit.

Race is a topic that West often brings up in his music — "Freestyle 4" on his new album, The Life of Pablo, directly references the Black Live Matter movement — and it's one that he confronts daily in his personal life not only as a black man but as the father of a mixed race child; it's no surprise that he'd want to make a statement with his choice of models. And this time, I think at least part of that statement is: If you're not going to cast them, I will.

There is a ton that can be said about Kanye West and the talk isn't going to stop anytime soon. Even just looking at Thursday, there was so much happening at his fashion show — Lamar Odom's first public appearance following his hospitalization, the crazy ass video game, The Life of Pablo, figuring out who the hell Pablo is, that Taylor Swift lyric — that the clothes were barely a part of the conversation. I fear I'll drive myself insane if I think too much about whether I take West seriously or not. Right now the answer is something like, "I can like his music without taking him — oh, wait, no, why did he tweet that?!" But there's no denying that some good (the music, Yeezy Boosts) has come with the bad (the tweets, those weird body stockings, did I mention the tweets?), and the diverse casting falls into the positive category. Now I just hope his casting decision has as much of an influence as his music has.