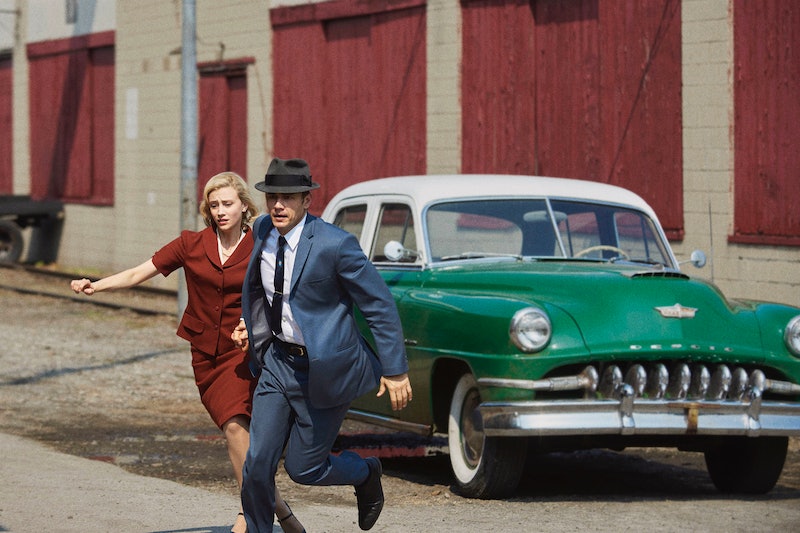 The latest Stephen King adaptation has premiered on Hulu, and it's a doozy. 11.22.63 , based on the novel of the same name, starts as a book about traveling through time to save President John F. Kennedy and ends up being about so much more. Like any good King story, it features digressions into the dark, twisted things that human beings are capable of, and hints at the mysterious, unseen forces that seek to keep humanity in line. All of these will be explored in the show, but in a post-Game Of Thrones world, every TV adaptation has two separate fan bases: The newbies and the book readers. So what do readers know that some viewers don't when it comes to book spoilers for 11.22.63 ?

Well, book readers know that it's a long journey. With 849 pages of source material, surely some aspects of King's story are going to change from page to screen, but the core parts of the story stay the same. English teacher Jacob Epping, played on the series by James Franco, is traveling back in time to prevent the assassination of JFK on Nov. 22, 1963. The romance, mystery, and death — lots of death — that happens along the way will be a surprise to newcomers, but not a shock to book readers or anyone who reads the rest of this article. Here's what you can expect from 11.22.63, if the series sticks closely to its source material. Spoilers ahead.

Much like in soccer, the Yellow Card Man in 11.22.63 serves as a warning for Jake Epping in his travels through time. However, instead of an official referee, the Yellow Card Man is a drunk who hangs around near the portal that Jake uses to travel through time. He initially serves no clear purpose, and then ends up with a slit throat and his yellow card turned to black. It's not until we meet Green Card Man that we learn the cards serve as indicators for a portal-keeper's sanity. Green is good. Yellow isn't bad. Black is very bad. Protecting the portal seems to be a very difficult job, but why do they do it? Where do they come from? Who assigns them to a portal? These questions, unfortunately, don't come with answers — at least not in King's novel.

JFK Is Saved, But At What Cost?

The big spoiler is that Jake Epping successfully saves JFK, which is the end of the story right? Wrong. So Wrong. During his trips to the past, where he tries some test runs by preventing deaths he knows will occur, Jake discovers that for every death he prevents a new one is caused. When JFK is saved, a massive earthquake kills 7,000 people in California. If that wasn't bad enough, when Jake returns to the present he discovers that the entire world has become a ruined landscape, as saving President Kennedy altered history and caused the Vietnam War to go nuclear. This is in addition to a series of other things happening including entirely different presidents than the ones we've had since JFK, and the Civil Rights Act not passing. Suddenly the question isn't "How can I save JFK?" it's, "Should I save JFK?"

It's Secretly A Love Story — A Tragic One

11.22.63 is presented as a time-travel thriller, which it absolutely is, but it's also a love story. More than anything else, the story ends up being about Jake's love for Sadie Dunhill, a resident of the small Texas town where he spends a few years of his life before confronting Lee Harvey Oswald. When Sadie is introduced, the story becomes not just about altering history, but what someone is willing to fight for to make sure everything turns out OK, and eventually how to accept that sometimes things will not turn out for the best — and that's OK too. Sadie's story seems to come to an end when she is shot by Oswald in a confrontation at the Texas School Book Depository that prevents JFK's assassination, but nothing ends cleanly when time travel is involved. In the end, Jake can only save her life by making sure he never meets her in the first place.

11.22.63 gets weird, but it also gets real. A story about living out time-travel wish fulfillment becomes a story about love, loss, and how everything that happens — good or bad — forms who we are both as individuals and as a society. It also has some mysterious people hanging around rifts in the space-time continuum that have a color-coordinated hat/card code and it's never really explained what their deal is. While the Hulu adaptation may not stick to these exact plotlines, they serve as a guide for what to expect as you embark on 11.22.63, and provide fair warning to keep some tissues handy once Sadie is introduced.