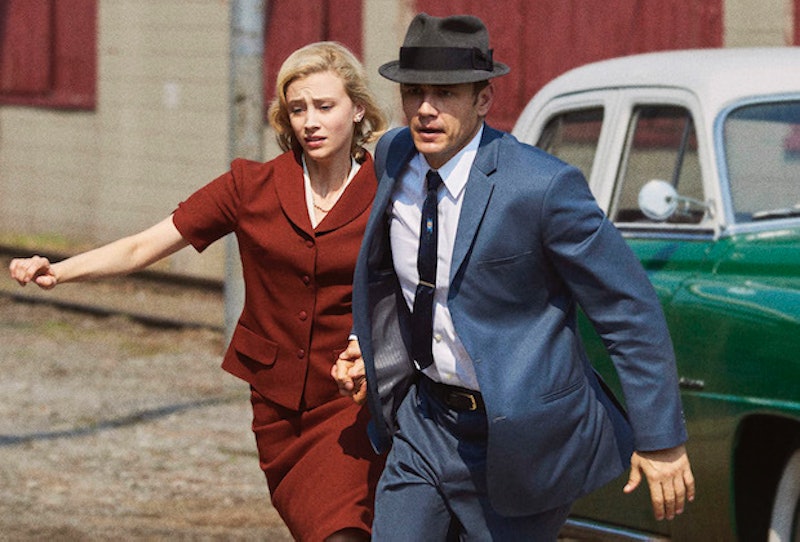 Honestly, I've always been skeptical when I hear a popular book is turning into a movie or TV series. Will the adaptation do the original justice? What if the characters don't look the way I had envisioned in my head? These are some of the many questions book lovers immediately ask themselves time and time again. So when word got out that James Franco would be starring in the Hulu series 11.22.63 , based on the Stephen King novel by the same name, I became instantly apprehensive and fearful of how 11.22.63 would differ from the book. And, as it turns out, my fears weren't entirely unwarranted since this eight-part series (like so many others before it) does deviate from the source material in one very big way. However, I think many will agree that it won't necessarily be to the show's detriment.

During a recent interview with TVLine at the Television Critics Association winter press tour, executive producer Bridget Carpenter assured us that viewers who have read King's iconic novel will be “very satisfied” with its Hulu counterpart, which centers around Jake Epping (Franco), an ordinary high school teacher whose life gets changed forever when he's asked to travel back in time to 1958 and prevent the assassination of President John F. Kennedy. (A small favor to ask, right?) But while Carpenter and J.J. Abrams have put in a lot of effort to make sure the story stays true to the book, she did admit that there will be one very prominent shift for fans to expect — like the fact that there will be no voiceover whatsoever.

"Neither of us wanted to do a voiceover," Carpenter revealed, which is kind of a big deal — as many book fans know — since the novel allowed readers to hear everything that Jake was thinking inside of his head. The show will give us no such liberty. That being said, they did manage to come up with a roundabout solution for this little narrative hiccup. "J.J.’s truly excellent idea was [Jake] needed somebody with him," Carpenter explained. "That nudge helped me draw a character that existed in King’s book, but I shifted him and made him more of a compatriot to Jake. That’s probably the biggest liberty, but it felt really authentic."

Speaking as a highly apprehensive book-to-TV critic, I'd say that's a change we can all come to terms with. I mean, it's certainly a far cry from that time Dumbledore freaked out at Harry during The Goblet of Fire movie for NO. FREAKING. REASON. (Diehard fans know what moment I'm referring to.) So this shouldn't call for a big fan upset or anything. And just in case you're curious how Stephen King himself feels about this big adjustment, Carpenter added that the famous author is totally onboard with everything and has "responded so positively" to any change-ups.

"I was unsure if he was going to embrace some of these significant adjustments, but they were necessary — and he saw that," said Carpenter. And, really, if it's good enough for King, it should definitely be good for the rest of us. Now if you'll excuse me, I have some serious TV marathoning to do.