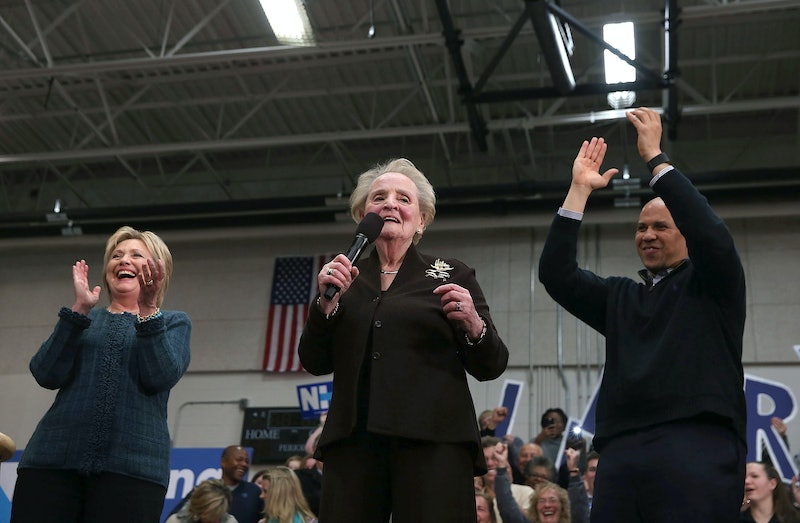 Hillary Clinton appears to be having a Madeleine Albright problem. The former Secretary of State, who became acquainted with Clinton when her husband was in office, has been quite vocal about drumming up support for the candidate somewhat to the detriment of the presidential hopeful. Albright is a proud feminist and appears deeply dedicated to advancing women in politics. Her infamous statement that "there's a special place in hell for women who don’t help each other" reached new heights when she applied it the Clinton campaign, appearing to alienate the many women who support fellow Democratic presidential hopeful Bernie Sanders. Albright faced massive backlash and took to The New York Times to redeem herself. However, Madeleine Albright's op-ed doesn't quite get it.

Albright's initial statements came during a Clinton campaign event that she spoke at on Saturday in New Hampshire. She was initially shocked to find that her call to action went viral, she writes in her op-ed that was published nearly a week after the incident. In the meantime, a Democratic debate took place at the University of Wisconsin in Milwaukee on Thursday that saw Clinton somewhat shrug off what Albright had to say in a way that appeared eerily similar to Albright's op-ed — and not necessarily in a good way.

To the Clinton campaign, Albright's statements appear to be par for the course. When asked about the divisive comment during the Thursday night Democratic debate, the candidate deflected Albright's comment in favor of addressing the inequality that women face in politics. Clinton said:

I think that she's been saying that for as long as I've known her, which is about 25 years. But it doesn't change my view that we need to empower everyone, women and men, to make the best decisions in their minds that they can make. That's what I've always stood for.

This rhetoric is exactly what Albright used to bolster her point that women need to stick together and help raise each other up as they continue to fight for equality. Doing so doesn't necessarily mean sticking by a candidate based on their gender, which she did manage to acknowledge in her piece. Albright wrote:

I absolutely believe what I said, that women should help one another, but this was the wrong context and the wrong time to use that line. I did not mean to argue that women should support a particular candidate based solely on gender. But I understand that I came across as condemning those who disagree with my political preferences.

If Albright's op-ed would've concluded on that note, perhaps her message would feel less muddied. Albright instead continued writing about the importance of seeing a viable female candidate elected president such as Clinton. Yet again, she touched upon the importance of a woman in power. "When women are empowered to make decisions, society benefits. They will raise issues, pass bills and put money into projects that men might overlook or oppose," Albright stated.

What truly sticks out is her fears that feminism's progress throughout the years will slip away. Those fears are certainly not unfounded; they just appear to be aimed at the wrong party. Planned Parenthood, income equality, and paid family leave — all issues Albright write about — are issues that both Clinton and Sanders have taken up the mantle for and frequently address. It's Republican candidates like Ted Cruz, Donald Trump, and Marco Rubio who have repeatedly attacked Planned Parenthood, while saying little on equal pay or paid family leave.

That is certainly not the case on the left, however. Sanders' thoughts on paid time off are nearly identical to that of Clinton's, who has repeatedly voted in favor for expanding paid time off throughout her political career. The Vermont senator mirrors that intent and even co-sponsored a bill last year that would require a guaranteed 12 weeks paid leave. Likewise, equal pay factors heavily into the Sanders platform as he is firmly committed to shifting the precarious distribution of wealth that has made for a shrinking middle class.

Clinton has been similarly vocal about income inequality and has repeatedly worked to pass legislature that would raise the minimum wage as well as advocate for fair wages for women. Regarding Planned Parenthood, the two share many beliefs about the organization's benefit to American citizens. It's Clinton who managed to snag a key endorsement from the organization, however. When Planned Parenthood President Cecile Richards issued her statements in favor of Clinton, rather than attacking Sanders, she instead condemned Republican candidates for what she perceives to be a bitter war waged against women. Richards said:

Donald Trump and Ted Cruz and their powerful friends may be trying to drag us back to the Stone Age, but we’ve got our sights set on the future. I don’t know that it has been particularly clear in the Republican primary just exactly how extreme these candidates are.

There are far better ways for Albright to advocate for Clinton without trotting out scare tactics meant more for another party. The fact that both Clinton and Sanders are not only feminists but actively seeking equality is just as refreshing as Albright's sweet story at the end of her op-ed of her granddaughter wondering just what the big deal is about having a female Secretary of State. There are certainly more women in politics than when Albright began her career decades ago and she is proud to see another generation continue her fight for feminism.

As Clinton would say, "women's rights are human rights." It's absolutely pivotal that women continue to help each other but let's not discount our allies. Democratic women have the freedom to vote for whomever they please as do Republican women, undecided female voters, and every other female American citizen of voting age in between. Albright's rhetoric sadly still hits a sour note and may continue to haunt the Clinton campaign. Her heart appears to be in the right place but maybe it's time she retire a statement she's been using for over 25 years. Maybe it's time for a change to keep moving forward.

More like this
23 Abortion Funds In States With Trigger Bans To Donate To
By Emma Carey
10 Times Boris Johnson Got It Wrong On Trans Rights
By El Hunt and Sam Ramsden
Michigan’s Governor Is “Going To Fight Like Hell” To Protect Abortion Access
By Andrea Zelinski
How To Fight For Reproductive Rights, Based On How Much Time You Have
By Courtney Young
Get Even More From Bustle — Sign Up For The Newsletter