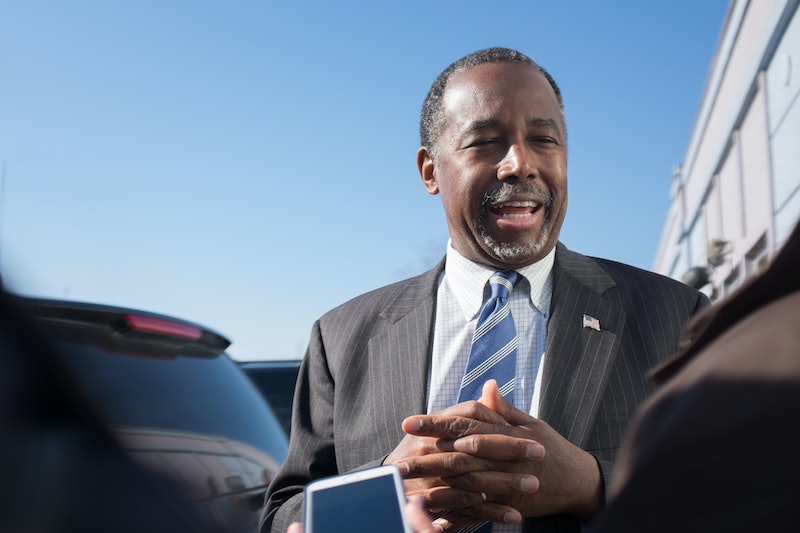 There are a mere six serious GOP presidential contenders left in what was once a seemingly limitless field. Billionaire business mogul Donald Trump remains in the lead, with a comfortable 37.3 percent polling average, according to the latest data from Real Clear Politics. Meanwhile, Sen. Ted Cruz (R-Texas), the winner of the GOP's Iowa caucus, continues to surge, holding onto a 20 percent polling average. After Trump and Cruz, the GOP race is still a free-for-all, with Sen. Marco Rubio of Florida and Ohio Gov. John Kasich still vying for national attention. Former Florida Gov. Jeb Bush and neurosurgeon Ben Carson have have seen their political limelights dimmed, the GOP presidential ticket gradually falling out of their reach. But will Ben Carson drop out after the South Carolina primary? Time might just be up the soft-spoken doctor whom America loved six months ago.

Since Tuesday's New Hampshire primary, GOP presidential candidates have been dropping like flies. Over the last week, former Hewlett-Packard CEO Carly Fiorina, New Jersey Gov. Chris Christie, and former Virginia Gov. Jim Gilmore announced that they were suspending their campaigns. All three candidates received zero delegates in the primary, with Christie and Fiorina ending up in sixth and seventh place, respectively.

Surprisingly, Carson, who until recently charmed many conservative Americans with his evangelical views and anti-Washington sentiments, placed behind Christie and Fiorina in New Hampshire. But despite that pitiful finish, the famed neurosurgeon is still determined to win over the hearts of South Carolinians.

Carson, of course, is relying on Christian voters in South Carolina to carry him through the upcoming primary. According to NBC News, Carson played up his opposition to same-sex marriage to attendees at the Faith and Family Presidential Forum in Greenville on Friday.

"There are people of faith who believe marriage is between one man and woman … who are being prosecuted [sic]," Carson said at the religious forum. "We cannot tolerate that."

But Carson may have to do a lot more to keep his political profile high in South Carolina — and nationwide. Currently, Carson's polling at just 6 percent in South Carolina, coming in last place behind Kasich. And while Kasich is still struggling in the national polls — the Ohio governor has a national polling average of just 4 percent — his recent endorsement from The New York Times has made him one of the most serious contenders in the GOP race.

Carson, on the other hand, continues to receive loyal support from conservative Christians, but that alone may not be enough to win the GOP presidential ticket, let alone national election to the Oval Office. His outsider status, too, has been outdone by Trump, who seems to have the monopoly on non-politicians masquerading as viable political leaders. And, of course, there's Cruz, who's been fighting for the top with Trump ever since Iowa, and who has a strong hold on the same Christians whom Carson appeals to. Carson's presidential dreams may be over when the South Carolina primary results roll in.