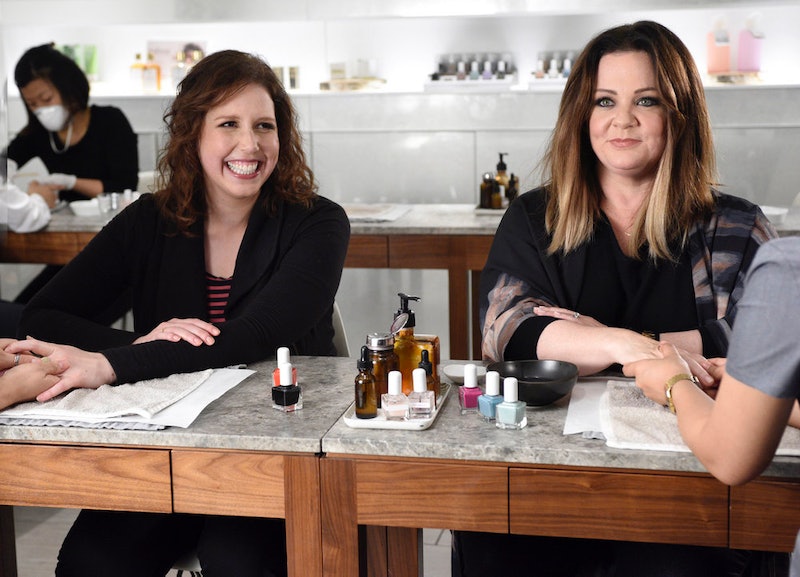 Hosting Saturday Night Live five times is a big deal. Only a select few have done it, and Tina Fey, Drew Barrymore, and Candice Bergen are the only women to have reached it. So of course Melissa McCarthy would want to celebrate entering the five-timers club during her SNL monologue on February 13. She had a whole song prepared and everything. There was only one problem: She hasn't hosted five times yet. She'd hosted three times before, and then made an appearance on the 40th anniversary special.

It's a shame, though, because McCarthy was ready for that five-timers jacket. Her monologue was an entire musical number, with a microphone emblazoned with a sparkly gold "5" on it. She sang "Born to Host Five Times" to the tune of "Born to Be Alive," and she wore "5x" glasses. Kenan Thompson came out in a big "5" costume—but he's the one who busted her bubble when it came to telling her how many times she's actually hosted. "I Googled it while I was sweating backstage in this foam costume that you mad me wear," he said. When he said that showing up on the 40th anniversary special only counted as a fraction of a hosting gig, she swapped out those "5x" glasses for ones that said "4 and 1/16".

Aww, poor Melissa McCarthy. But, there's only one obvious conclusion to draw. She's just going to have to host again and get her full-size five-timers jacket. The small one, which was being worn by a banana to show off the scale, just isn't enough. Come back, McCarthy! You're not in the five-timers club yet, but you're at the top of our list of best repeat SNL hosts.