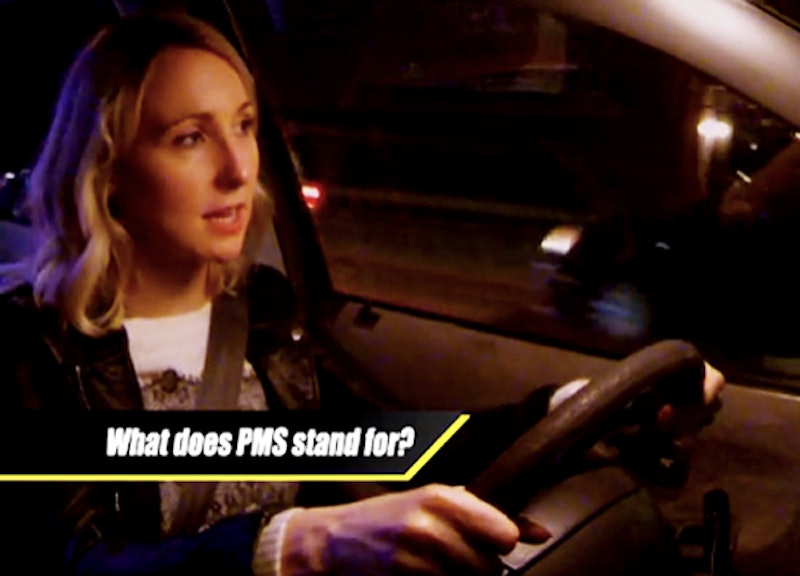 If you haven't taken some time out of your day to watch Not Safe With Nikki Glaser , the sex comedy show that debuted on Comedy Central on Tuesday, February 9, 2016, then my question is, well, what's wrong with you? Glaser has been making our lives a little funnier since she started doing stand-up at 18-years-old and, now, her funny, feminist, sex-positive new show is what everyone, male or female, needs to be watching. In this exclusive Not Safe With Nikki Glaser "Pay Your Tab Cab" clip, Niki visits a strip club in order to pick up the young men who are streaming out of the club in the middle of the night. Once they're in her taxi, she promises to give them back the money they spent at the strip club if they can answer a few simple questions.

When those questions start with, "Elizabeth Warren is the Senator of what state?," you can tell immediately what Glaser is doing. After these men spent an entire night objectifying women, she is only rewarding the ones who can prove that they respect women, too. And doing it alongside Charity (who "is like Vanna White, only more flexible") proves that Glaser is not shaming the women of the strip club in any way for earning a living like anyone else; instead, she keeps her sharp comedy focused on making them men who would see women as nothing but sexual objects for their gratification. And she does it so hilariously, so subtly, and yet so pointedly that you might not even realize how much you've learned until the clip is over.

This sketch it pretty par for the course on Not Safe With Nikki Glaser. Check it out below, and add this show to your list of things to watch immediately.

More like this
Sandra Bullock, Girlboss Extraordinaire
By Matt Harkins & Viviana Olen
Spice Girls’ Net Worth: The Richest Member Is Wealthier Than The Rest Combined
By Hugh McIntyre
50 Years After Creating Her Alter Ego, Angelyne Is Still Driving That Pink Convertible
By Gretchen Smail
Billie Piper Just Confirmed 'I Hate Suzie’s Festive Return
By Kayla Blanton and Shahed Ezaydi
Get Even More From Bustle — Sign Up For The Newsletter