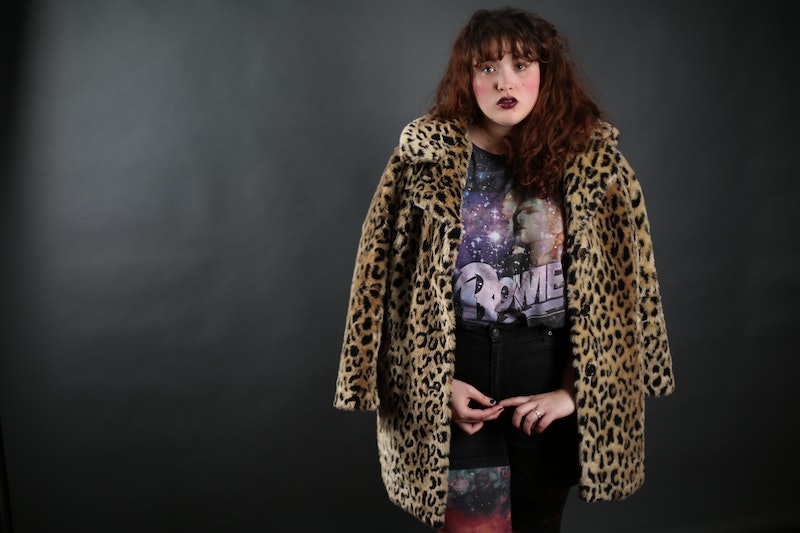 There was a starman. There was life on Mars. And I wasn’t alone. To say David Bowie has influenced my life, my style, and my sense of identity, well, that doesn’t seem to do him justice. From the moment I saw this man — this queer, beautiful man unafraid of wearing dresses or glitter eyeshadow or speaking to reporters while so clearly stoned and in another universe — I began to understand that being an underdog wasn’t such a bad thing. Being a weird fat chick who listened to too much Ziggy Stardust and read too many books and couldn’t quite click with the rest of her peers wasn’t such a bad thing. Bowie was an activist for outcasts, an idol for vagabonds, and a reminder that, even when it didn’t seem possible, changes were inevitable. And that no matter how scary those changes might be, they had to be better than this.

When news broke of Bowie’s tragic passing at age 69 — he succumbed to cancer on Jan. 10 after an 18-month battle — I didn’t quite believe it. I spent a solid 30 minutes in bed with my partner, Googling and Wikipedia-ing and searching for hope where there was none to be had. Bowie had always seemed indestructible, but there we were, reading about his destruction.

In my head, I traveled to my earliest memory of the androgynous musician whose lyrics and fashion choices and stance on gender and sexuality changed as quickly as a decade flashes by. I remembered my sister, who had a Best Of Bowie album she’d blast on when our dad and my mom weren’t home. She would've been 13 at the time, while I was only five.

Much like I’d feel a couple of years down the line, she never quite fit in, either. Always too sad, too loud, too open, too honest for a world that never seemed to give a shit about people who couldn’t suck it up and get on with their lives and jobs and duties. She was never good at “sucking it up.” And I think Bowie made her feel like she didn’t have to.

It was a lesson she’d eventually instill in me, her chubby little sister who couldn’t figure out whether she should hide under baggy layers and tunics until the skinny girl that must be inside her was able to break free, or just quit altogether. Even as she grew older, and more and more conflicted about her identity and her place in this world, my sister always seemed indestructible, too. Too sad, too loud, too open, too honest to ever not be here. When she died in 2012 — the cause, self inflicted — “Changes” was stuck in my head for a solid month. I kept that to myself, unsure as to why that song was on such an internal loop. Looking back, maybe it was because I didn’t know what I was waiting for, either. Maybe my time felt like it was running wild, and I couldn't "turn and face the strange," because there was just too much of it. Maybe her own time ran too wild. Maybe time just made no sense anymore. She passed on my brother's wedding day, and in the time since, time has sort of ceased to make sense altogether.

Two and a half months after she died, I found myself plowing my way through senior year of undergrad, becoming more and more invested in Bowie. I'd look in the mirror while "Ziggy Stardust" blasted through my iHome, only to be met with screwed-up eyes and screwed-up hairdos, but feeling less like she was gone. Who the fuck knew, anyway, right? Maybe she was with the starman.

I think I was also drawn to Bowie for the same reason she must have been. His ever-changing persona, aesthetic and musical, was always so damn undefinable. One moment he was rocking face paint and golden eyelids, the next he was in a white power suit, the next he looked like a regular ol’ dude. He was always embracing change — something I had endlessly struggled with. I suppose listening to him helped me realize she would've wished for change for me.

When it came to things like fashion, for instance, my sister could always sense the change I craved. Through high school and early college, I struggled to define my style. I could just blame the sheer lack of cute plus size options available to folks at the time for this, and that was likely partially responsible. But more than the lack of options was the lack of understanding I had for myself. Like my sister, who had been studying to be a fashion designer, I was interested in clothes and in the transformative abilities of a dress that can make you feel like intergalactic space travel and human acceptance for people different to ourselves are actual possibilities, rather than naive pipe dreams. But I didn’t want to be interested in an industry that was seemingly disinterested in me. I felt guilty for my love of clothes for a long time — like I shouldn’t support a world that was so exclusionary to people like me, but more than that, like I wasn’t worthy of all the pretty things. Not until I was prettier myself, according to the rules of society I now know to be made-up.

Both my sister and I loved Bowie because he questioned those rules. Yes, he was a thin, white dude, rather than a pudgy mixed race girl or a 6'1" blonde struggling with a myriad of inner turmoils I'll never know the extent of. But the point remains: He knew that the guidelines set by culture for “men versus women” were bullshit. He knew that there are no boundaries, except the ones we set for ourselves. When asked about his stylistic choices, he’d say things like, “For me, style was just something to use. It didn’t matter to me if it was hard rock or punk or whatever; it was whether or not it suited what I was trying to say at that particular point in time.”

It’s something that as a body positive activist and a fat woman who actually wants to be fat, I can understand pretty well. I still struggle to define my style as coming from one source of inspiration. If I’m feeling particularly bold and ready to say “fuck everyone and everything,” I might wear a crop top. I might wear short shorts that put my cellulite on full display. I might rock a low rise, two-piece bikini. If I’m feeling quiet, wanting to spend time in my own head, I might wear something more covered. Something that will allow me to exist independently in a kind of sartorial solitude. If I’m feeling like wearing my politics on my sleeve, I might put on a fat positive T-shirt or an outfit printed in desserts. Something that says, “I’m not ashamed of my love of food, even if that’s what humans — and especially women — are taught they should feel.”

Bowie never defined his style, but he sure as hell played with it. He played with the intersection of gender and sexual identity with fashion. He played with rule-breaking. And he taught me that breaking the rules wasn’t just OK: It was often good. In a way, it's something my sister did, too. She never set rules for herself when it came to style... or, anything, really.

Much like Bowie's ever-changing look, she'd go through these stages of sartorial swapping. One day, the most flowery, frilly, femme dress you'd ever seen. The next, my dad's old jeans and a flannel. Millennials talk about androgynous fashion a lot these days. Women and feminine people are arguably freer than ever before to shop the "men's" section and exchange their dresses for trousers and button-downs — for gender neutral options that are neither here nor there. But we're a long way off from when the same can be said of men or masculine individuals. Personally, though, I don't know that I ever would've really thought about these things if not for Bowie's influence.

As Bustle writer Meg Zulch wrote in their piece, "How Getting Dressed As A Non-Binary Individual Is A Political Act," being a masculine individual who chooses to present femininely — be it through dresses or makeup or otherwise "girlish" things — can still lend itself to "increased stares and negative attention [...] The world over, one can hear stories of men or masculine individuals being attacked for wearing dresses or skirts or simply for looking feminine." But at least our generation (although arguably still limited to liberal circles in the first world) is talking about these things — and I'd be happy to blame Bowie for that, at least partially.

Unlike Millennials, Bowie was presenting androgynously and toying with ambiguity over his sexual orientation in the '70s and '80s, decades before it was largely accepted to do so. In 2010, he would disassociate himself with being "bisexual, pansexual, or tri-sexual," joking instead that, "I was incredibly promiscuous," and that he was more of an experimenter than anything else. But I've never felt that his lack of a concrete sexual identity invalidated anything he did or stood for prior to that point. If anything, it's that lack of a self-prescribed box that made him so relatable to me to begin with. His identity was simply to be himself. My sister's identity had always been to be herself, too. Even if no one else in the room appreciated her take on sex or drugs or music or the workforce.

In a similar vein, being yourself is difficult when you're a fat person. Your life is coated in all these rules and constructs for how you should live, what you're doing wrong, and how much better you could be if only you allow yourself to be proactive and lose the weight. Despite the growing popularity of the body positivity movement, Oprah told a national audience on the same day that Bowie died, "We all want to be healthier. But let's get real, we all want to lose weight," in a Weight Watchers commercial during the Golden Globes — as if speaking on behalf of everyone in the world was something any one individual is actually capable of doing.

The assumption that everyone who is fat is unhappy — is in the wrong body (a statement I cannot help but find insulting to those who actually are in the wrong body) — is one perpetuated the world over. It took me a long time, and a lot of help from activists, my partner, and rule-breakers like Bowie and my sister, to realize this wasn't true for me, and many others. To realize that, yes, I personally could lose the weight if I wanted. I'd done it before, after all. But that I simply didn't want to. My sense of identity — my sexuality, my aesthetic, my sartorial choices — are irrevocably intertwined with my fat body. Not everyone is going to find empowerment and self love in their fat, but I certainly do.

Much like I don't want to lose weight, I do want to exercise my right to fashion, and anything else that brings me joy. I want to mix bold patterns and wear hot, Barbie pink. I want to burn every skirted bathing suit bottom I've ever owned, and wear my fatkinis and low rise swimsuits without ever having to apologize for my rolls. Like David Bowie and my sister, I want to break every rule that glossy magazines and my television and misguided relatives ever threw my way. I want to wear all the sparkle, all the time. I want to beat the so-called guidelines, for more than one day.