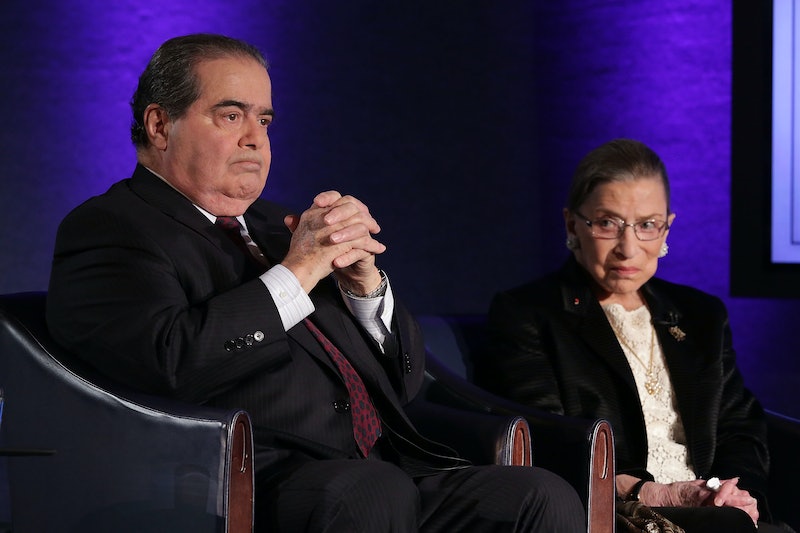 The nation is reeling in the wake of Supreme Court Justice Antonin Scalia's sudden death on Saturday, and while everyone from President Obama to Donald Trump has voiced their condolences for his death, the most touching tribute so far has come from one of his colleagues in the Supreme Court. Justice Ruth Bader Ginsburg released an heartbreaking statement Sunday about the loss of her close friend, whom she and others close to Scalia called "Nino."

Although their political rivalry was widely publicized, Ginsburg and Scalia were actually quite good friends, since even before they were both on the Supreme Court. Their professional relationship began in the U.S. Court of Appeals for the Washington D.C. circuit, a stepping stone toward the Supreme Court. On the three judge panels, the two had the forum for more open debate, through which they gained a mutual respect for the others’ intelligence and wit. They battled in the courtroom, but ultimately found they had more in common than not. "She likes opera, and she's a very nice person. What's not to like?" Scalia said at an event at George Washington University last year. "Except her views on the law."

The death of a dedicated, passionate legal expert has affected the country, but Scalia’s close friend Ginsburg articulated the loss suffered by his family and friends best.

Toward the end of the opera Scalia/Ginsburg, tenor Scalia and soprano Ginsburg sing a duet: 'We are different, we are one,' different in our interpretation of written texts, one in our reverence for the Constitution and the institution we serve. From our years together at the D.C. Circuit, we were best buddies. We disagreed now and then, but when I wrote for the Court and received a Scalia dissent, the opinion ultimately released was notably better than my initial circulation. Justice Scalia nailed all the weak spots—the 'applesauce' and 'argle bargle'—and gave me just what I needed to strengthen the majority opinion. He was a jurist of captivating brilliance and wit, with a rare talent to make even the most sober judge laugh. The press referred to his 'energetic fervor,' 'astringent intellect,' 'peppery prose,' 'acumen,' and 'affability,' all apt descriptions. He was eminently quotable, his pungent opinions so clearly stated that his words never slipped from the reader’s grasp.

Justice Scalia once described as the peak of his days on the bench an evening at the Opera Ball when he joined two Washington National Opera tenors at the piano for a medley of songs. He called it the famous Three Tenors performance. He was, indeed, a magnificent performer. It was my great good fortune to have known him as working colleague and treasured friend.

Ginsburg's tribute to Scalia is especially touching because the two were so fiercely opposed in their political views. When partisanship so often negatively impacts all aspects of American politics, it's refreshing and inspiring to see two people on opposite ends of the ideological spectrum celebrate a close friendship.

Scalia and Ginsburg really were friendship goals. They celebrated every New Years Eve together, had gourmet dinner parties prepared by Ginsburg's late husband, and once, rode on an elephant during a joint vacation in India. And as Ginsburg reminisces in her statement, their parallel intellectualism gave each the opportunity to elevate their discourse and become better at the jobs they loved so much.

Scalia/Ginsburg was a real opera, written by a former law student in tribute to the two justices' intense political opposition and their shared love of opera. But it's also the real story of two unlikely friends who bonded over their love for their country and their passion for the law. "I had a wonderful time. I loved every minute of it," said Ginsburg when she saw the opera in July. Judging from her heartbreaking tribute to her best buddy, Ginsburg would probably say the same thing about her friendship with Scalia.