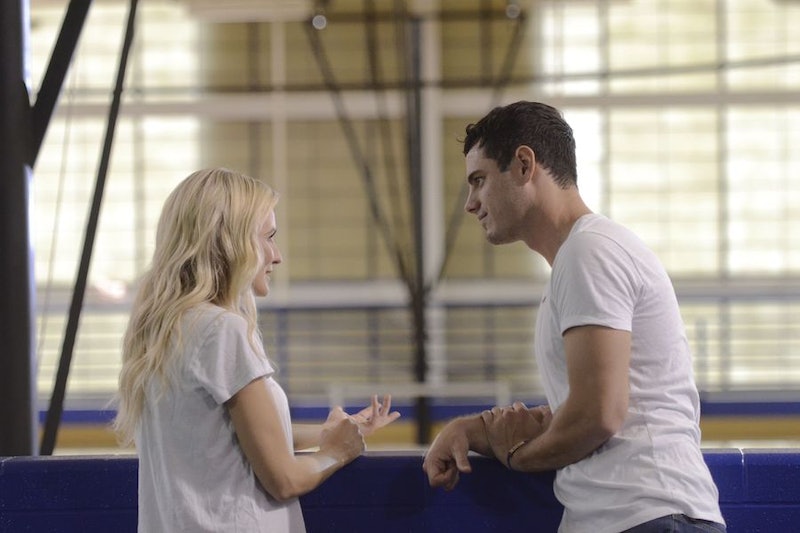 This season of The Bachelor has provided fans with so many amazing ladies to root for. It's been tough to lay claim to a single favorite. I have to say that, in my mind, The Bachelor frontrunner is Lauren B. It looks like I might not be the only one who feels this way because last week the undercover villainess, Leah Block, tried her hardest to (unsuccessfully) convince Ben that Lauren B. was basically the ruler of the underworld. The ladies have been feeling the Lauren B. heat but she doesn't seem to let it throw her off her game. She has some serious Bachelor chops, and, if she doesn't win Ben's heart, Lauren B. should be the 2016 Bachelorette .

See, the great thing about Lauren is that she is one of the most low-key players in The Bachelor mansion. She hasn't engaged in backstabbing, and she seems to kind of stay on the outskirts of any drama that is happening around her. The only time she became involved in shenanigans was when Leah panicked and chose to throw her under the bus in a poor attempt at saving her own skin. Bachelor Nation was shocked that she had chosen the most harmless contestant in the house for her last Hail Mary attempt at gaining Ben's affections. All I kept thinking was how Leah's sudden betrayal proved that Lauren is obviously the strongest competitor in the house.

The girl could easily handle a house full of Bachelorette contestants and she could do it while staying true to her mellow, sweet nature. Here's a few more reasons why Lauren be should absolutely be the next Bachelorette if she doesn't win this season of The Bachelor.

Let's be real, Lauren is super beautiful in a really natural way. She would have an entire house full of dudes falling at her feet immediately upon arrival. The competition would be fierce right from the get-go. You know what that means: Great TV.

She Doesn't Feed On Drama

The Bachelor and The Bachelorette have more combined drama than the human brain can accept at one time, and I love them for that. Lauren would bring such a different vibe, though. Let the contestants have the craziness while Lauren just floats through being a genuine good person. I think her lack of drama would bring such different plot situations to the season.

She Knows How To Play The Game

She may be drama free, but Lauren knows how to play the game right. She hasn't done anything shady, and she already has people trying to sabotage her to Ben. That's the kind of undercover ninja power that makes her a true competitor. With skills like that, she could rule The Bachelorette with an iron fist.

Lauren is a flight attendant and clearly has a passion for travel. You can't just throw anybody into the coveted Bachelorette position. The lady in charge should be well-rounded and interesting in order for fans to get on board. Lauren would bring a unique worldly perspective. She also might bring those tiny little peanuts they give you during flights. Who doesn't love that?

Ben seems pretty smitten with Lauren, but, if she ends up getting the boot instead of the ring, she would make the perfect Bachelorette.