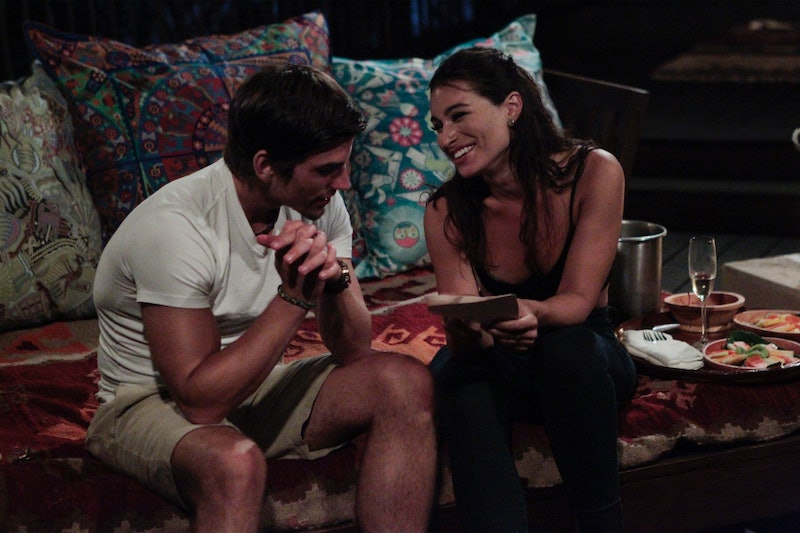 Love is in the air, and what better time to rekindle old flames than at a wedding, right? For Ashley Iaconetti and Jared from Bachelor in Paradise , the Bachelor 20 special could have been the perfect time for the two "exes" to reunite. Well, at least that's what Ashely I. was hoping for. Based on how much she talked about him, fans might have been wondering if Ashley I. and Jared were dating post Paradise, but, from the looks of it, it seems that these two are exactly where they left off, which is not together. But, that didn't deter Ashley I., because, as she pointed out, love was in the air and there was an open bar at Jade and Tanner's wedding.

In October, Ashley spoke to Bustle about the status of her relationship with Jared saying that they've been on "good terms" since the end of Paradise. But, in the months since the show's conclusion, Ashley seems to have pulled a 360 and was back at having feelings for Jared that were more than just friendly. At the Bachelor 20 special, Ashely said she hoped that "the romance of the wedding rubs off on Jared," which just proves that she's still hoping that something will work out between the two.

After the wedding, Jared and Ashley were talking on the very steps that Jade had just walked down to the aisle. Unfortunately, Ashley pointed out that Jared had "Paradise body language," which didn't seem like it would bode well for the rest of the night. And it didn't. Jared said that he cares about Ashley but at this moment he and Ashley are really good friends. Friends. Cue the crying on Ashley's part, once again heart-broken by Jared. Here's hoping she's able to move on from him at some point, because girl deserves someone who will love her back.

More like this
This 'Bachelor' Contestant Got Back With Her Bachelor Nation Boyfriend After Going Home
By Grace Wehniainen
Rachel Responded To 'Bachelor' Fan Theories About Her TikTok With Clayton
By Grace Wehniainen
Megan Mullally & Nick Offerman’s Relationship Includes Several Collaborations
By Caitlin Gallagher and Brad Witter
The Bachelor’s Christina Mandrell Comes From One Of Country Music’s Most Famous Families
By Brad Witter
Get Even More From Bustle — Sign Up For The Newsletter
From hair trends to relationship advice, our daily newsletter has everything you need to sound like a person who’s on TikTok, even if you aren’t.