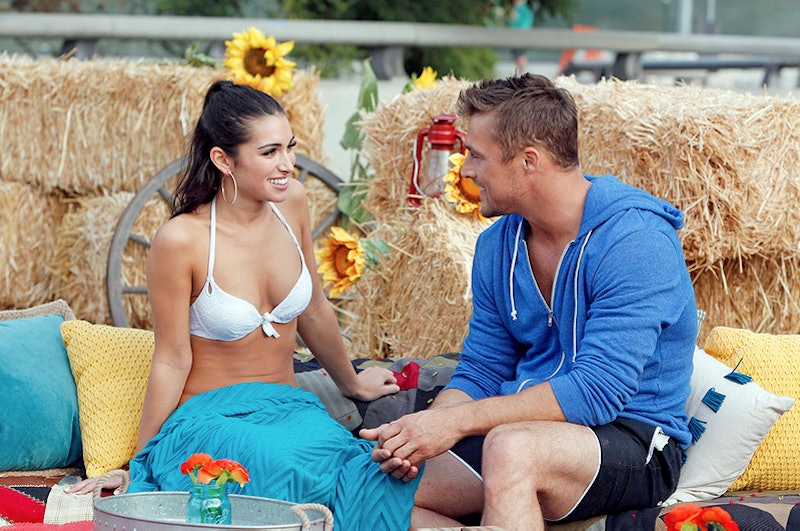 Ashley Iaconetti, also known as Ashley I. or the Kardashian of the Bachelor/ette kingdom, is one of the most interesting contestants to come through the Bachelor machine in a very long time. (She’s second only to another Ashley — Ashley Salter, whose onion/pomegranate exploits will go down in Bachelor history.) First appearing on Chris’ season, Ashley’s story was simple at first — she was a virgin, but she could drive (sorry, Clueless has invaded my brain), and she cried an awful lot. A lot was made of the fact that, even though Ashley likes to get glam, put on makeup, and kiss boys, she still — gasp — has never had sex with another person! Glory, get my smelling salts. But now that she's on Bachelor in Paradise, Ashley I. is proving to be completely relatable, mostly because she has such a strong sense of who she is.

I have to admit that I wasn’t too sure about Ashley when we first met her. She just seemed like to be all filler and no thriller, you know? She also cried a lot, and there’s already enough crying on the show. The Bachelor should be like baseball — no crying. I imagine that the way she was edited accounted for a lot of that. Mea culpa, Ashley! It’s really easy to judge before you have an insight into what someone is really like, especially on reality television. Ashley is now my favorite lady to watch, and in honor of her being a cool chick, here are some reasons she’s now one of the most relatable women in The Bachelor’s canon.

1. She Has A Great Relationship With Her Sister

Lauren, Ashley’s sister, was one of the twists on this season of Bachelor In Paradise. Why have one Iaconetti when you can have two? My sister and I are super close, and frankly, I’d love to have her come on an adventure like BiP with me. I completely see my sister and myself in Lauren and Ashley’s interactions, from Lauren assuring Ashley that Jade was not making out with Jared to Lauren telling Ashley to make her high ponytail more “Ariana” (as in Grande). Don’t worry, Ashley — I think guys like my sister better, too.

2. She Likes To Play With Style

I know that Beyoncé is all “I woke up like this,” but, uh, no one wakes up like that. Ashley plans out outfits, tries out new makeup and hairstyles, and strives to look her best all the time. Sometimes, you just need to look foxy. What’s wrong with that? Nothing. Effortlessness can be overrated.

3. She Asserts That She Can Be Smart And Feminine

On Chris’ season, Ashley was a victim of the dreaded two-on-one date, along with Kelsey “I have an amazing story” Poe. Kelsey was on the “I use big words because I’m smarter than you are” train, and eventually, Ashley was just not having it. She told Chris what she thought about Kelsey, and when Kelsey confronted Ashley about her appearance and her perceived idiocy, Ashley let her have it, proclaiming that she too has a Master’s degree from a great university, and that she could see right through all of Kelsey’s crap. Ashley was pretty clear that you can be smart and still like to dress up. Get it, girl.

4. She Gets Insecure Around Love Interests

Dating is hard, y’all. Sometimes it’s tough to find the words to say to your crush, and then you just feel like an idiot when nothing comes out. Ashley totally exemplified this on the first episode of season two of Bachelor in Paradise. She was so into Jared (from Kaitlyn’s season), but she just couldn’t find the words to ask him any meaningful questions, and just sat there. Been there, done that. Later on, she was worried that Jared was making out with Jade (she made her sister spy for her, which I would totally do), and when she got a date card to ask Jared out with, she rehearsed what she was going to say with her sis. Again, been there, done that. I loved these moments, because they just reiterated how real Ashley is.

5. She Has A Frothy Obsession, And The Blog To Go With It

At Duchess Kimberly, Ashley blogs about … well, whatever she wants to. It’s mostly celebrity-gossip-type stuff, with a focus on her love for Kim Kardashian. If Ashley wants to love Kim Kardashian and still be a hardcore journalist, she’s entitled to that. Not everything has to be serious all the time. Like Ashley, I also have a Master’s degree, and I’m obsessed with The Bachelor. Everybody's got their something.

6. She Stands Up For Her Virginity And Who She Is

Ashley’s unapologetic about her virginity. Period. She can dress the way she want, kiss the way she wants, and still be a virgin. No one owns Ashley’s body but herself, and she is picky about who she wants to sleep with. So why does she still get slut-shamed for how she dresses and interacts with boys? Well, she wrote a Cosmopolitan article about that very same topic, and it had me standing on my chair and clapping after I read it.

Whether Ashley is looking for love or just looking for a little fun on Bachelor in Paradise (either is fine), I can’t wait to watch her this season.