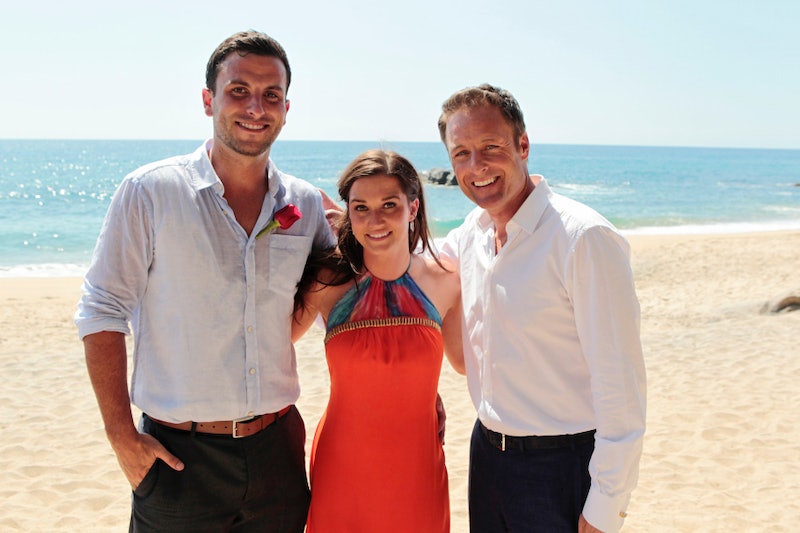 Very rarely do we get a wedding out of The Bachelor. Even though the franchise boasts "finding love," only a few relationships have actually formed and last. On The Bachelor 20 special, Bachelors and Bachelorettes of the past came together to celebrate the franchise's anniversary season and to celebrate Jade and Tanner's wedding. The pair met on the spinoff Bachelor in Paradise, and, after only a few short weeks of dating, the two were engaged. Now, they're getting married — on TV, of course — and you might be wondering if Jade and Tanner are paying for their wedding, or if this ultra-glamourous setting is, once again, brought to you by ABC.

While we don't know exactly if these two were the ones signing the checks for this extremely posh wedding, we can probably assume that they weren't. If you're going to get married on television, produced by ABC, you can probably bet that ABC is going to foot the bill. If anything, these two might be getting paid for their wedding. ABC declined to comment when asked.

But, based on past Bachelor weddings, which also aired on ABC, Jade and Tanner could be making somewhere around six figures for their televised nuptials. E! Online claimed in 2013 that Catherine and Sean Lowe were earning "roughly the same amount" as Ashely Hebert and J.P. Rosenbaum did for their televised wedding, which was estimated to be in the six-figures. It isn't too far-fetched to assume that Jade and Tanner would be making a similar amount of money for their wedding. Not too shabby for getting the wedding of your dreams and the memories of the event caught on cameras to re-watch forever.