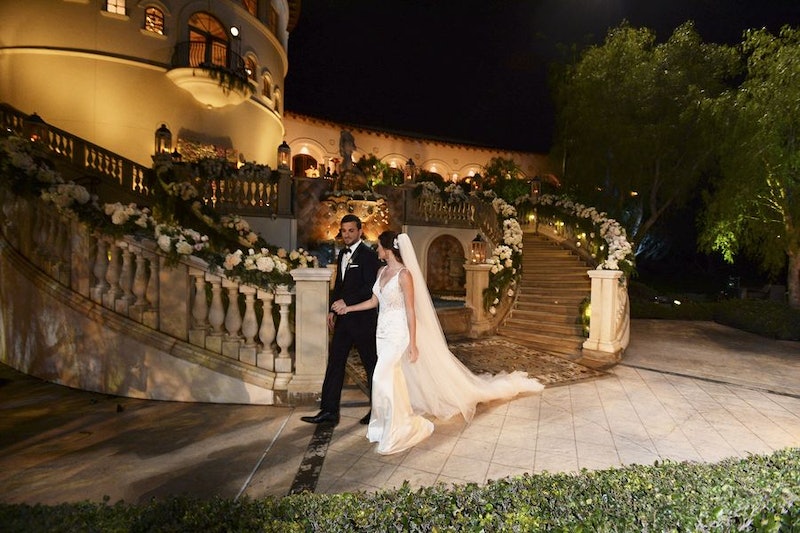 There's nothing like a wedding to bring Bachelor Nation together, and Jade Roper and Tanner Tolbert's marriage was no exception. One look at Jade and Tanner's wedding guest list reveals The Bachelor family came out in full force to watch the Bachelor In Paradise couple tie the knot. I'm talking stars from the original seasons of the show over a decade ago up to now as well as the pair's own family and friends. Basically, their wedding was a big Bachelor party. But, who exactly was invited to this shindig?

Well, not everyone, apparently. Tenley Molzahn, who starred on BiP Season 2 with Jade and Tanner told Bustle she never got an invite, but it all worked out. Instead of hitting up the wedding, she had "the best second date of [her] life" with a guy that she's pretty serious about. But, although Tenley was left off the list, most of Bachelor Nation did attend. And, Jade's Bachelor BFF, Carly Waddell, was even in her wedding party! Although Jade and Tanner kept things pretty traditional with their bridesmaids and groomsmen, opting for close friends rather than co-stars, Carly and Jade have such a real friendship bond that she made the cut to stand by Jade's side on the big night.

Other memorable guests included the following:

In addition to Carly, some of Jade's fellow Chris Soules' season stars attended like Ashley S. and Ashley I.

They once competed for Kaitlyn Bristowe's heart together, and apparently that formed a bond. Stars from Season 11 included the likes of Ben Z. JJ Lane, and even Nick Viall.

Is it weird that Tanner's ex was there? I hope not because Kaitlyn and Shawn both stopped by for the big day! (So did Chris Soules, so at least the ex awkwardness was spread around.)

Former Bachelors and Bachelorettes like Bob Guiney, Trista Sutter, Ali Fedotowsky, Jillian Harris, Andrew Firestone, and more were brought together by the celebration.

Ben Higgins stopped by, maybe to take some notes for his own upcoming wedding? (Fingers crossed!)

He even officiated the ceremony like the true host he is