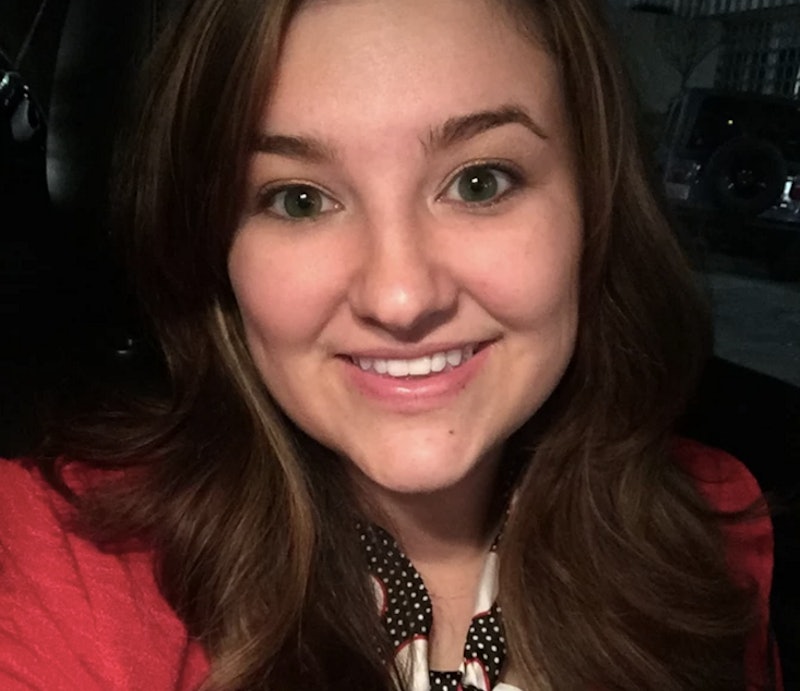 Valentine's Day has never been my cup of tea. Cheesy, cliche Valentine's Day date ideas make me cringe, not to mention the fact that I've never really had much luck when it comes to love on this holiday. I don't know if it has something to do with a personal Mercury Retrograde that apparently only affects my life and only on Feb. 14, but I always tend to break up with boyfriends around that time, so I haven't exactly ever associated the holiday with ~*love*~. In fact, I always used to think Valentine's Day was cheesy, overrated, and best avoided at all costs. It seemed like an excuse for couples to brag on Instagram about their $100 bouquets of flowers, and sit on the same side of the table at a mid-range restaurant. No thanks.

Don't get me wrong — I'm not cynical about romance, just Valentine's Day. I believe if you love someone you should show them all year long — and not just on a specific calendar day. Oh, and I hate the over-priced stuffed animals that seem to magically appear at every store in the country come Feb.1. They remind me of prizes you win at a carnival, and my dog eats their little black button eyes. So, there's that.

This year, however, I decided to give the holiday a second chance. I wanted to see if there really was something to all the fuss — obviously, someone is buying those big ol' teddy bears for a reason — and if it was possible to follow all the cheesy Valentine's Day tropes saturating every rom-com in existence, and still have a good time. First, however, I had to convince my partner in crime. My boyfriend Nick and I have dated for about six months, and he's by far the most amazing guy I've ever been with. He's handsome, hilarious, charming, and for what it's worth, a great dancer. He's also willing to help me build my Ikea furniture, and if that isn't love, I don't know what is.

This Valentine's Day I wanted to put us outside of our comfort zones, and try something different. I wanted to take him on a tacky/cheesy/corny/stereotypically romantic Valentine's Day date to see how he'd react — and to see if it would change the way I looked at the holiday, too.

Here's how the experiment went down — Nick actually brought up Valentine's Day plans first. He asked me if there was something I specifically wanted to do, or if he should just plan an evening. Boy, was he in for a surprise.

My plan was to emulate everything I've ever seen in a corny chick flick movie. Essentially, I was to channel every Katherine Heigl movie and roll it up into one barf-worthy, cliche date.

First, I had to get ready. I threw a pink bath bomb into my tub, painted my nails and toes pink, and I even shaved above the knee. I felt like a walking bottle of Pepto, and it was all in the name of V-Day.

Nick called me because, apparently, my primping was taking too long. I told him I'd pick him up at 6 p.m. and I was running about 10 minutes late. He sounded like a high school girl. "Are you coming to pick me up? I'm ready!" Yes, my 26-year-old boyfriend had suddenly turned into a V-Day diva.

I picked out my outfit: A pair of black skinny jeans, a black, red, and white pussy bow blouse (side note: why is it called that? So weird), red bow heels, and a red blazer to top it all off. If Valentine's Day wrapping paper was a thing, I was it. But I was ready to pick up my hot date.

I pulled up in the car and told Nick I was ready. He hopped in and made a joke about me not coming to the door like a "true gentleman." I welcomed him in the car with Marvin Gaye's "Let's Get It On" because nothing sets the mood like music, am I right? Nick handed me red roses, because he's the sweetest. Ohmygosh — our date had barely begun and I was feeling sappier already.

He asked where we were going to dinner, and I told him it was a surprise. I drove for 10 minutes, occasionally glancing at Nick's face. He looked really nervous. I eventually parked and Nick looked at me and just said, "You're kidding, right?"

Apparently, he didn't think Red Lobster was worthy of a Valentine's Day date.

At this point, I was trying to hold back my laughter and keep a composed face for the sake of the experiment. I really wanted to be like, "It's all a joke! Ha! Let's order a pizza and watch movies because that's what we'd rather be doing anyway." But, alas, lobster fest awaited us.

We walked inside where Nick was surprised to learn that I had called ahead to make reservations. He was laughing because he thought it was all a weird joke (hint: it kinda was), but we took a selfie in front of the lobster tank because, what else do you do at Red Lobster?

Over dinner, we were having fun like always when our waitress came up to take our order. I let him order first, and when the waitress asked for my order, Nick looked at me and said, "What are you getting to eat, my little cheddar bay biscuit?" The waitress nearly died laughing. He was beating me at my own game.

Side note: All joking aside, Red Lobster was actually pretty darn delicious.

After dinner, we went to a movie — I know, cliche AF. But that was the point! We saw Deadpool, which I suppose isn't the most romantic movie one could see on Valentine's Day. I would have gotten tickets to the Nicholas Sparks flick The Choice, but they were sold out on Valentine's Day (color me surprised). So, I opted for a neutral movie that we'd both enjoy.

After the movie, I fessed up and told Nick that our entire date was an experiment and I wanted to know what he thought. He looked relieved to know I didn't think he'd actually expected this overplayed, cliche type of Valentine's Day. We both agreed that we prefer more original dates than dinner and a movie. We usually tend to branch out and try things like breakout rooms, cooking classes, and day trips. While there is absolutely nothing wrong with dinner and movie, it just didn't really feel like our style as a couple, on Valentine's Day, or any other day.

Still, we both agreed that we had more fun than we expected, and loved that we could have a good time with each other in any situation — even when a matchy-matchy outfit, Marvin Gaye, and Red Lobster were in the picture. And perhaps that was the point. Valentine's Day isn't about seeing how much money you can spend on another person in the name of love. It's simply about spending time together. Maybe I would never totally buy into the commercialism of the holiday altogether, but I could finally respect Valentine's Day for what it was — a chance to just be with the people you love.

The real win of the evening, though? I have officially earned the pet name of "cheddar bay biscuit." What? I kind of like it.