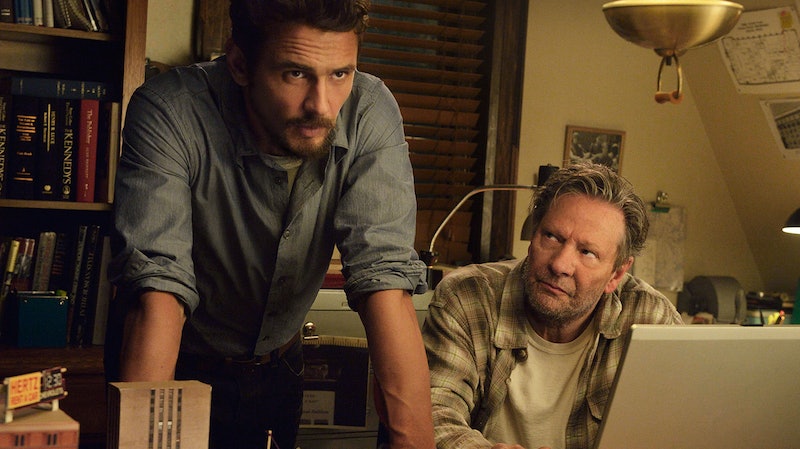 Happy President's Day! In honor of the patriotic holiday, Hulu has unveiled their newest original series, 11.22.63 , from producer J.J. Abrams and based on the 2011 novel 11/22/63 by Stephen King. Starring the inimitable James Franco as Jake Epping, a hapless teacher who finds himself embroiled in a mind-bending plot involving assassinations, time travel, and a magical portal inside the closet of a diner that leads — not to Narnia — but to the 1960s. Abrams is no stranger to the intricacies of time travel, having completely rewritten the Star Trek timeline with his 2009 reboot. But time travel works differently in every story… so what are the rules of time travel in 11.22.63?

Thankfully, Oscar winner Chris Cooper (Adaptation.) is on hand as friendly diner owner Al to explain it all to Jake — and to us. It turns out that the rules are, if not simple, then at least very specific. Every time you walk through his magical closet, you end up in the exact same spot at the exact same time: 11:58 a.m. on Oct. 21, 1960. Furthermore, no matter how long you stay in the 1960s — an hour, a day, a week, years even — when you arrive back in the present day, only two minutes will have passed.

Now, here's where it gets tricky. Any change you make while you're in the past will affect the present; Jake carves a message into a tree outside the diner in 1960, and suddenly there it is when he arrives back five-and-a-half decades later. BUT! If you then re-enter the portal, all the changes you made on your last visit will be nullified and you'll have to start all over again. As if that wasn't headache-inducing enough, there's also the fact that something — Fate or God or the Adjustment Bureau or whatever — will always try to stop you from making changes. The bigger the change you try to make, the bigger and deadlier the obstacles it will put in your path.

So what's the point of all of this? Why is James Franco trying to change the past? He's on a mission to prevent the assassination of President John F. Kennedy, which took place on — you guessed it — Nov. 22, 1963. Al seemed to believe that stopping Kennedy's murder would change lots of things for the better, from also preventing the assassination of his brother Robert to deescalating the war in Vietnam. But Al has cancer (made drastically worse in only two minutes thanks to a two-year sojourn to the past), so he must pass the mantle of responsibility off to someone else — someone like Jake.

Will Jake be able to pull it off? Or will changing things in the past only make things worse in the present, as always seems to be the case in this twisty sci-fi tales? We'll find out over the course of the next seven episodes, I suppose.