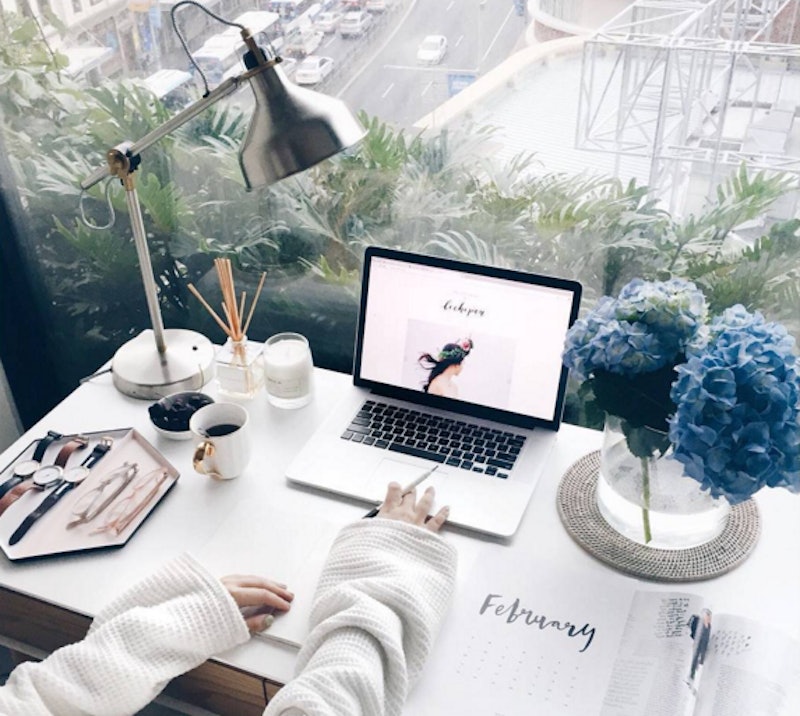 We all take pride in being hard workers: We arrive to the office with a pep in our step, clutching our travelers mugs like swords, and ready to kick the day's butt. But while full calendars and to-do lists make us feel productive, there's a difference between working smarter and working harder. In the first, you're getting your tasks done like a boss, but you're not over-extending yourself to the point of bags under your eyes and a white wine habit the moment you get home. In the second... you're doing just that.

While being a hard worker is a character trait to be proud of, you don't necessarily have to kill yourself with a heavy workload every day to be one. Instead, work smarter and get just as much done with the same quality as before, but with not as much effort. Then, you can use all that extra energy you now have after work to do other fun things, like actually meet up with friends for tacos or work a little on that side project you love without falling face first into the bed come nine o'clock every evening. You excited for this? Below are seven ways to work smarter, not harder.

1. Make All Your Big Decisions First Thing In The Morning

Alright, you can brush your teeth first, but shortly after get all the big decisions of that day squared away. Why? Because your brain is working at its most refreshed pace and you'll be able to square things away faster now then you would at 4:00 p.m.

Dan Scalco, digital marketing agency founder and entrepreneur writer from entrepreneur site Inc, explained, "Like our body, our brain gets tired. This is what's called 'Decision Fatigue.' As the day goes on, our brain functionality declines, and it could take us more energy and time to come to the same conclusion." Whether that means doing your biggest tasks first thing in the morning, or sitting down and making up your mind on a couple of things that would need your attention, do it first.

2. Draft "To Don't" Lists Every Morning

Every morning while you're having your first cup of coffee, think of all the things you need to do and create a "to don't" list. Sometimes when we have an overwhelming amount stacked up for that day, we get focused on the small, inessential tasks because they're easy to do and buy us some time before we have to roll up our sleeves and do the hard stuff. But think of how much time that wastes! In order to avoid that, jot down a list of items you should finish, but that can be postponed if time runs out. Then you can do them when things aren't as hectic.

Lifestyle writer Robert Locke from Lifehack wrote, "We all know about to do lists and I find that they are generally great...But often we find that we are doing nonessential tasks or ones that can easily be postponed. That is why many people recommend the to don’t list." Don't weigh yourself down with things that aren't time-sensitive. Keep your energy for the bigger projects.

3. Use Your Waiting Time

It's not just work, work, work all day long — we have a lot of in between time spread throughout the day that could actually be used to get stuff done. Think of all the times you've waited for the train, were stuck in a coffee shop line, or waited for an email to come in. Instead of just waiting it out, take the opportunity to complete little things on your to-do list.

Scalco agreed "The in-between time we're given almost every day is a great opportunity to complete all the small tasks we tend to push aside." So answer some emails, create tomorrow's to-do list, organize a couple of files on your desktop — get the housekeeping things off of your list.

When you're deep in productivity mode, you have crazy thoughts of how you can just slam Five Hour Energy drinks like it's your job and work throughout the night if you have to. You're a machine, a powerhouse, completely unstoppable! While that's amazing (kudos to you!) you're actually slowing yourself down by plowing ahead and ignoring the concept of a break.

Business writer Jeff Haden from entrepreneur site Inc., explained, "On average, your brain is able to remain focused for only 90 minutes, and then you need at least 15 minutes of rest. (The phenomenon is based on ultradian rhythms.) By taking breaks roughly every 90 minutes, you allow your mind and body to renew--and be ready to fire off another 90-minute period of high activity."

Sure, you can slosh through hours of work, but you won't be functioning at your best. Take 10 to 15 minutes to rest, take a walk, give yourself a treat, refill on inspo, and get back at it.

You know how refreshed you feel when you pack up your laptop from the office and go work at a cafe instead? This is the same idea, just you decide to work in three different spots per day. That might sound like a lot of moving around, but there's a great benefit to that. (And if you work in an office, you can move around to different work stations, if that's possible.)

Haden explained, "The idea is that you set up at various cafes, workspaces, or, as in Colin's case, pubs to get chunks of work done throughout the day. Workstation popcorn starts with a clear, thought-out to-do list: You create a plan for what you will accomplish at each location so you can immediately jump into those tasks."

When you have three different lists of goals for three different places, you feel refreshed every time you wrap one up and are ready to move. And bonus points: The time it takes to walk over to your new spot gives you a chance to reflect on the work you have done, and brainstorm in other areas.

6. Figure Out When You're Most Productive

Not everyone is raring to go after their first cup of coffee - we all have our own productivity peaks. Figure out when is yours, and aim to do all the big money stuff during that time. For example, back when I was in college I'd be most productive at nine in the evening. I thought the most clearly when the whole house was sleeping, and if I tried writing a paper in the afternoon like a normal person, it would take me four times as long.

Faisal Hoque, author of Survive to Thrive – 27 Practices of Resilient Entrepreneurs, Innovators, And Leaders, and business writer for entrepreneur site Fast Company, suggested, "Our bodies work in cycles. There are times of the day that are most productive as well as times that are quite the opposite. The most effective way of staying productive is to learn your cycle. Which times of the day do you find that you complete the most tasks as well as those times in which all you can think about is taking a break?" Figure that out and you'll work more productively.

7. Don't Create Too Many Short Term Goals — That Isn't Productive

If you could see my planner, you'd cringe. My to-do lists are what you'd call ambitious. I'd have task after task squeezed into the little weekday boxes, feeling sure I could knock them all out of the park in a timely manner. The end-result? Massive burnout and a feeling of hate towards anyone and everything come Friday. Focusing on 10 goals a day just isn't productive. Focusing on two to four and then kicking their butts, is.

Hoque said, "It is very tempting to focus on many goals at once. As we mature our own personal techniques and disciplines, it is very possible to be involved in multiple initiatives. However, limiting goals for each initiative to measureable outcomes is what allows us not to overwhelm ourselves into a state of submission and defeat." So take it easy with the planner. Schedule three-ish goals a day and focus on handing those in at a 100 percent. That way you're working smarter, not harder.